On a warming planet, oyster 'seeds' in jeopardy 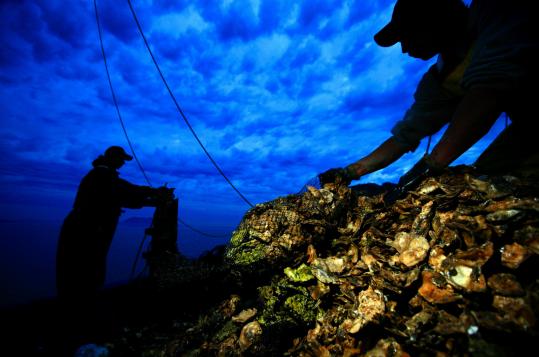 QUILCENE, Wash. - For decades, the unwritten motto at shellfish hatcheries in the Pacific Northwest was "Better oysters through science."

Scientists mated the heartiest, fastest-growing stock to produce plumper, sweeter oysters for eating fried or raw on the half-shell.

They probed the genetic code to select for the most desirable traits of the Pacific oyster, an import from Japan that now weighs in, pound for pound, as the No. 1 aquacultured crop in the world: 4.5 million tons a year (shells included) valued at $3 billion.

They even bred out sexual organs that at certain times of the year can take up more than a third of an oyster's body weight and give it a briny taste.

With selective breeding and genetic fingerprinting, they were on their way to developing a super oyster resistant to summer mortality, keeping one step ahead of a warmer, more polluted planet. Or so they thought.

Suddenly, oyster research bogged down as a strain of bacteria went on a West Coast killing spree, wiping out billions of oyster larvae.

The outbreak first shut down an oyster brood stock program run by Oregon State University in Newport, Ore., in 2005. "All we saw was our larvae were dying," said fisheries professor Chris Langdon, "and we couldn't put our finger on why."

Then the microscopic culprit overran commercial hatcheries in Washington and Oregon, crippling production over the past couple of years and causing a shortage of oyster "seed" needed to replant tideland farms from Southern California to Canada.

"It's pretty scary," said Sue Cudd, owner of Whiskey Creek Shellfish Hatchery in Netarts, Ore. The hatchery, she said, has been drowning in costs and failing to produce sufficient oyster larvae for West Coast shellfish farmers. "We almost decided to close, and people panicked. I realized if I go out of business, I take a lot of people with me."

Science has identified the culprit, a strain of bacteria called Vibrio tubiashii, which is harmless to humans but fatal to baby oysters. It attacks them in their free-swimming larval stage before they settle to the seafloor, latch onto rocks or other oysters, and grow shells.

The Vibrio blooms appear to be linked to warmer waters in estuaries and the oxygen-starved dead zones that have showed up this decade off the coast of Oregon and Washington, researchers said.

These low-oxygen waters correlate with stronger winds coming from a warming planet.

Scientists note that Vibrio tubiashii has an advantage over other microscopic sea life. This bacteria thrive in oxygen-starved dead zones, feasting on decaying plant and animal matter littering the seafloor. And when brought to the surface with water welling up from the deep, they can switch survival strategies to flourish in warm, well-oxygenated waters.

Researchers were not surprised to find this type of bacteria in seawater but were stunned that it had become so dominant over other microbes: It was nearly a pure concentration of this one bacteria, one that happens to be deadly to oyster larvae.

The Taylor Shellfish Farms hatchery in Washington is producing less than a quarter of its capacity, far short of what is needed to reseed its oyster beds or to sell to other shellfish farmers looking to do the same.

The shortage of oyster seed, or "spat," will have its greatest effect in several years, when oyster beds left fallow would otherwise be ready for harvest. That might set the stage for shortages and economic upheaval in the West Coast's $110 million-a-year shellfish industry, said Bill Dewey, a manager at the company.

The shutdown of Oregon State's experimental hatchery prompted university officials to develop a multistage filtering system that blasts seawater with ultraviolet light to kill bacteria, skims the harmful bacteria's lingering toxins, and then reinoculates the cleaned water with a healthful balance of microbes.

The Department of Agriculture is exploring microbial warfare. Gary Richards, a USDA researcher at the University of Delaware, has been screening seawater samples to find a virus that would seek out and destroy Vibrio tubiashii.