Galloping expenses closing many a barn

But options are few for owners giving up their horses 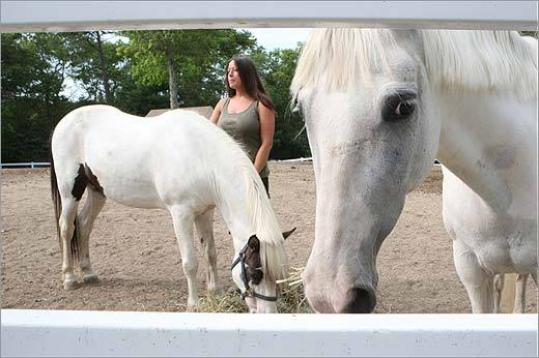 Sarah Nagle with Scout (above, left) and Starlight. Keeping 15 foster horses costs her $6,000 a month, but she said, "I do it because I love to." (Globe Staff Photo / Dominic Chavez)
Email|Print|Single Page| Text size – + By Christopher Baxter Globe Correspondent / July 9, 2008

Caitlin Sweetra gave up beer so her horse, Wicked, could have a little more grain.

But the horse Sweetra dreamed of owning as a little girl costs her more than just an evening indulgence. She says she has also stopped contributing to her retirement account, barely makes rent in North Andover, and cannot afford more than one meal each day.

"I called several rescue shelters to see if they would take her, and they said no," said Sweetra, who works as an accounting clerk at a hotel. "This weekend, I have $70 after I buy her hay, and that needs to last me until I get paid again in two weeks. It sounds ridiculous, I know, but I've changed my entire life just to feed this animal."

Once a $300-a-month horse, Wicked now runs a tab of more than $650. Saddled with the rising cost of feed, Sweetra and other horse owners are asking animal rescues to adopt their pets.

But the nonprofit organizations, already at capacity and facing their own rising costs, cannot afford to keep them. Advocacy groups are worrying about where the thousand-pound pets will go and whether anyone will pay to keep them alive.

Skyrocketing fuel prices and the slumping economy have spared few Bay Staters. Beyond chopping vacations short, downsizing their cars, or selling their boats, an increasing number of people are dumping their pets. Through mid-June, 70 people surrendered their cat or dog to the Boston Animal Care and Adoption Center for financial reasons, up from 21 during the same period last year, said Brian Adams, a spokesman for the Massachusetts Society for the Prevention of Cruelty to Animals.

Though no group tracks horse donations and adoptions, the situation is worse, at least anecdotally. "The market is flooded with unwanted horses," Nagle said. Caretakers fear that cash-strapped owners with nowhere to turn will stop feeding their horses and wonder whether putting them down, once an unthinkable act, is the only solution.

"Euthanasia possibly or maybe slaughter," Nagle said. "At least then the animals are being utilized. They're feeding somebody rather than starving to death."

Nagle said she works seven days a week to pay for her 15 foster horses, which cost $6,000 each month. They were originally someone else's responsibility, she said, but rather than see them shipped to auction or across the borders to be slaughtered, she gave them a home.

"I do it because I love to," Nagle said. "A lot of people don't pay for upkeep for horses, so when I get them they're in really poor condition. People don't realize we've spent thousands to rehabilitate a horse."

About 20 abandoned horses have been adopted by the Ranch Equine Rescue, based in East Longmeadow with a barn in Connecticut.

Board member Michele Hutchinson said the organization usually has space for two or three new horses, but this year, there is a waiting list. "The checkbook's empty and we're overloaded," she said.

Nearly two dozen advertisements for unwanted horses are posted on the organization's website, many citing tough financial times. One, written by Kristen Rossi of Hanson, reads: "Single mother of 2 just lost job, needs someone to take her horses."

Rossi rescued abandoned equines for more than a decade, paying their costs herself with no donations or nonprofit status. Now buried in bills for her 18 horses, Rossi barely keeps her family's finances afloat.

Like Nagle, Rossi grapples with the difficult prospect of death.

"I've never been for slaughter," she said. "But now these horses are suffering."

Beyond a place to sleep, hundreds of pounds of grain, and occasional veterinary visits, Wicked also gets new shoes every six weeks, spray for those buggy days, and daily vitamins.

Sweetra prefers to change her own lifestyle, even drastically, rather than mistreat her horse. But as the price of grain goes up, Wicked's big appetite becomes harder and harder to stomach.

"I have other bills, like rent and car insurance and utilities and my cellphone," said Sweetra, not to mention her other thirsty beast, a Jeep Cherokee. "I have a horse that keeps eating and a car that keeps burning gas. I never dreamed of this."

Christopher Baxter can be reached at cbaxter@globe.com.