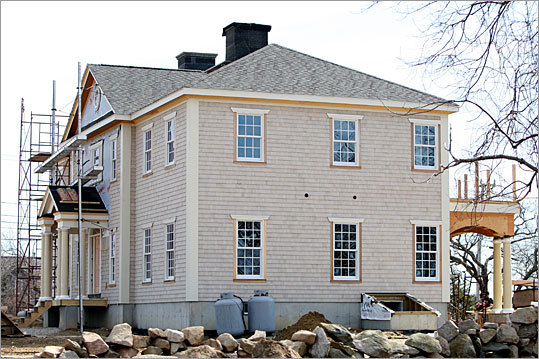 Phillip Burgess, who is building a home in Westport, is planning to have his electricity needs served by a wind turbine and geothermal well. (Jonathan Wiggs / Globe Staff)
Email|Print|Single Page| Text size – + By Michael Prager Globe Correspondent / April 6, 2008

WESTPORT - When Phillip Burgess gets an idea in his head, he's not likely to let go. Consider how he wound up in the kitchen of celebrity chef Todd English.

Though a commercial real estate broker by vocation, Burgess likes to cook, and decided that he wanted to work for English. "So I basically hounded him for a year, and after I caught up with him at the opening of Figs on Charles Street, he relented. I ended up as a line cook at Olives on Tuesday nights for two years. Pro bono, of course," Burgess said.

The same blend of patience and passion buttresses the robust foundation of Burgess's latest endeavor, a 3,700-square foot home in Westport that he intends will be entirely "off the grid;" that is, dependent on a wind turbine and geothermal wells for all its power, heating, and cooling needs.

"They're all ideas I've had floating around in my head for a while. Finally, I found the place to do it," he said recently at the home site, as a gang of tradesman trudged through the job site's ocean of mud. The 3-acre parcel has views of Buzzards Bay, Woods Hole, and the islands.

Burgess, who lives with his wife, Christine, and his daughter, Anna, 17, in Winchester, had bought a second place in Westport four years ago, but eventually wanted something bigger to accommodate friends and visitors. They bought this property last June.

From the start, Burgess chose the less traveled route. He had the home constructed in sections at a Vermont factory, and after the dozen segments were trucked to the Westport property, it was assembled in just one day. He also designed the house to take advantage of its views. The common areas are upstairs, while the bedrooms are on the ground level. The façade facing the water will have a 60-foot deck on the second floor.

It's a stretch to say the parcel is within spitting distance of the sea, but one of the area's outstanding characteristics is a constant wind that averages 14 miles per hour and in extreme weather has been known to reach 100 miles per hour. The land slopes upward from the shoreline until it is 83 feet above sea level at Burgess's property.

He is planning to install a 90-foot pole that will be topped with a Bergey 10-kilowatt wind turbine. The Bergey turbine's capacity, 22-foot rotor diameter, and record of durability make it the prime domestic-wind choice, said Newell Thomas, manager of the wind division at Lighthouse Electrical Contracting of Pembroke. He said the turbine can generate around 14,000 kilowatt-hours of electricity annually. Burgess figures that should be enough to provide his home with all its electrical power needs.

Thomas said Lighthouse has contracts to erect six turbines in the area this spring, including the one for Burgess.

Already windmills signal the approach to Burgess's property on Horseneck Road. A neighbor has one and across the road - and town line in Dartmouth - at the Sylvan Nursery are two more. Dartmouth has recently adopted new rules permitting windmill use, and recently granted Sylvan permission to add a third turbine. Westport also has clearly defined guidelines permitting windmills.

"I would say that Westport is particularly forward-thinking about wind," Thomas added.

Meanwhile, Burgess pointed the other spear of his attack on utility dependence straight downward: He had six, 300-foot deep geothermal boreholes dug that will underpin heating and air conditioning not only for the main three-bedroom, three-bath main house, but for a smaller guesthouse out back, too.

Each hole has a 600-foot loop of piping that circulates an antifreeze mixture through the earth, which has a constant temperature of roughly 50 degrees. The loops attach to heat pumps, which extract and condense the heat from the ground and circulate it through the house during cold months. In the summer, the pump extracts and condenses indoor heat and transfers it to the fluid, which dispels it under ground.

Geothermal heating and cooling is cost effective because, although it takes electricity to run the system, it produces five times the amount of warmth that electric heat would produce, according to Dan Everett, a co-founder of New England Geothermal, which installed the system. Burgess received a grant from the Renewable Energy Trust of the Massachusetts Technology Collaborative, the state development agency for renewable energy. Burgess said the turbine will cost about $80,000 installed, but after the state grant, and state and federal tax benefits, his net cost will be about $54,000.

Meanwhile, the geothermal system will cost about $57,000 - some $30,000 more than he would have paid for conventional heating and cooling.

Burgess is paying full freight for that, however, because the state agency does not offer any subsidies for geothermal. That's because the Renewable Fund was created in 1998 when the Legislature deregulated the utility industry, and restricted it to funding projects that generate electricity, said Warren Leon, the Trust's director. So far, he said most of the $3 million given out annually for residential renewable energy is for solar projects.

Burgess calculates the payback period for buying the wind turbine and spending the extra $30,000 for a geothermal system - some $84,000 total - will be about seven years, based on utility bills of around $1,000 a month if he was only drawing power from the grid.

Moreover, Burgess said he had huge savings from having the house pre-manufactured, instead of the traditional stick-built; on a square-foot basis, he estimates the construction costs were 60 percent of a stick-built home. The house was manufactured at Huntington Homes in East Montpelier, Vt.

His neighbor with the turbine also has solar panels. But Burgess said he has no plans now to follow suit. While ideal for wind power, the area can occasionally be socked in by coastal fog, which would undermine the effectiveness of solar panels.

The financial aspects of the wind and geothermal technologies do not nearly explain Burgess's fondness for renewable energy, any more than his experience as a line chef at Olives encompasses his interest in food. Burgess makes cheese, loves to grow vegetables, cans food, and sees all such pursuits as interconnected.

"To me, it's a long-term sustainability issue, the whole Michael Pollan continuum," he said, referring to the author of such books as "The Botany of Desire," which examines the interrelations between humans and nature, and "Omnivore's Dilemma," which illuminates the effects of industry on agriculture and questions whether it serves people well or healthfully.

"It's all connected," Burgess said. "The food thing, the farming thing, the technology thing, the sustainability thing. It may sound corny in the abstract, but it's all part of the same package. Everything's connected from one end to the other."