Many use period of penance to aid environment 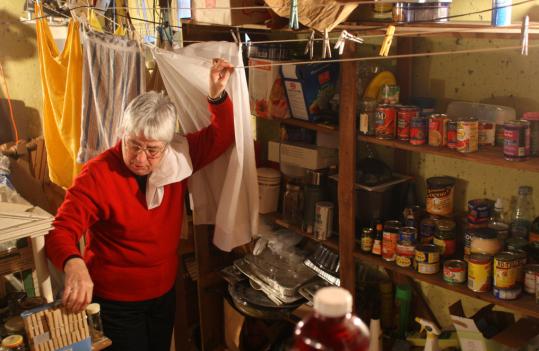 Many Christians sacrifice a personal pleasure such as chocolate, liquor, or cigarettes to mark Lent, the period of penance and prayer before Easter.

This year, Nina Scott is giving up carbon.

The retired University of Massachusetts at Amherst professor is hanging wet laundry on a clothesline in her basement to prevent emissions of heat-trapping carbon dioxide from using the dryer. She is carpooling as much as she can and turning off lights more often.

These actions will do little to slow global warming - at most, Scott will probably reduce her "carbon footprint" by 1 or 2 percent during Lent - but she says it's important to do nonetheless.

"For me, it's that connection between protecting nature and faith," said Scott, who is one of about a dozen parishioners at Amherst's Grace Episcopal Church who are following a Lenten carbon "diet" until Easter and, hopefully, beyond. Across New England, a small but growing number of Christians are pledging to reduce energy usage as part of the 40 days of sacrifice and charitable deeds leading up to Easter. These Lenten environmentalists say they have come to realize they are morally bound to help protect God's creation from the threat of human-made global warming, and Lent's season of reflection is an ideal time to start making changes.

Sue Butler of Cambridge stopped eating meat after learning how energy intensive its production can be. Lucy Robinson of Amherst installed a low-flow showerhead to cut her use of hot water. The First Church of Christ in Longmeadow will give out "eco-palms" - plants grown and harvested without harming the environment - on Palm Sunday, the Sunday before Easter. Leftover palms are burned and used for Ash Wednesday the following year, so in some churches, even the ashes that will be smeared on foreheads next year will be eco-friendly.

The Episcopal Diocese of Massachusetts is circulating green Lent ideas to its churches, suggesting, for example, that worshipers use candles instead of lights on Sundays and eat only locally grown foods to avoid the energy used to transport food long distances. "If we do our share, there is hope for the earth," said Massachusetts Episcopal Bishop Roy F. "Bud" Cederholm Jr.

Religious environmentalism - slowly growing since the 1990s - has exploded along with awareness of human-made climate change. Many faith communities now see the release of heat-trapping gases from power plants and vehicles as the destruction of a precious gift from God. Others see global warming intersecting with a fundamental calling: helping the poor. Because climate change will disproportionately hurt the most vulnerable - in places such as Bangladesh that are more prone to flooding as sea levels rise - religious leaders are embracing emissions reductions as their duty.

"Climate change is visible today . . . it is already affecting social justice," said Mary Evelyn Tucker, who, with her husband, John Grim, codirects the Forum on Religion and Ecology at Yale University. This weekend, the forum is sponsoring a conference examining the alliance between ecology and religion.

Individual behavior change, while collectively important, may not be enough to slow global warming, so faith-based groups also have become politically active on this issue. That's why the Massachusetts Interfaith Climate Action Network - made up of about 20 Christian, Islamic, Jewish, and other groups - was founded last year to lobby state legislators. The group held a day of prayer and advocacy at the State House in January.

Through much of history, scholars say, the environment was not a major cause for religious communities in part because the earth's bounty was seen as unlimited, if not always equally distributed. While indigenous faiths, such as those practiced by Native Americans, were protective of the earth, more mainstream religions often saw the world as God's gift, which could be controlled and used to foster prosperity, religion specialists said.

Even during the dawn of the environmental movement in the United States in the 1960s, organized religions were largely absent, specialists say. Early environmentalists evoked a spirituality about the earth, but some religious people interpreted this spirituality as pagan, one that viewed the earth itself as a deity. Government regulation and legal action against polluters were seen as the proper responses to the poisoning of air and water, not a collective change in overall behavior.

"It was about finding and punishing people who transgressed," said Grim. "There was a mindset it was scientific and antibusiness . . . religions were wary." Starting in the 1980s, some world religions began fighting pollution. By the 1990s, after the Exxon Valdez tanker spill in Alaska and as concerns mounted about the health effects of pollution, faith leaders began discussing more seriously their role in creating and solving an array of environmental problems, from hazardous waste disposal to air quality.

In the first part of this decade, as climate change science solidified, some evangelical Protestants began a "creation care" movement, though other evangelicals vigorously opposed it as shifting focus away from more important moral issues such as abortion and same-sex marriage. Last year, Pope Benedict XVI called on the Catholic Church to better protect the environment and stop wasting energy. Outside the spotlight, other faiths were also taking on global warming. "It's no longer seen as one among many advocacy issues, but one that goes to the core of what it means to be in relationship to God and creation," said Laura Everett, associate director of the Massachusetts Council of Churches, an organization of 17 Orthodox and Protestant denominations. "People are talking about it as how you walk in the world, how you use resources."

And Lent, some Christians say, is a perfect time to reexamine consumption issues as they prepare for the commemoration of the death and resurrection of Jesus. Some who are observing a green Lent say they came to the idea of reducing carbon after hearing about two Church of England bishops who urged followers this year to go on a "carbon fast." But others say their participation flows from a deliberate decision to start taking personal responsibility for the world's environmental woes.

Wendy Bell of Arlington, minister of the Harvard Unitarian Universalist Church, which does not traditionally observe Lent, began a blog last year called The Lenten Locavore to document her efforts to eat as many local foods as she could to avoid consuming the energy used in manufacturing and transporting food long distances.

"When I was growing up Methodist, I would give up chocolate or sugar and I still follow the tradition, but I wanted to do something that meant something to me," Bell said. "I wanted to challenge a whole system" that was harming the environment.

For Scott, and the rest of her "carbon diet" group, Lent is a time to not only look inward but outward. The group meets about once a week to discuss ways they can personally change, and how to encourage change among others in their church and the community. "I see this as a religious issue because I see the creation of the earth as a religious issue," Scott said. "This is God's work. If we are really messing it up, it is up to us to do something about it."