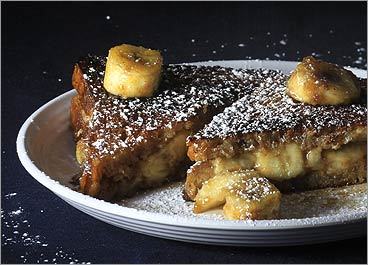 To shed some perspective: A typical batch of cinnamon toast uses a single teaspoon of the spice. Cinnamon cookies (about a tablespoon) and cinnamon rolls (roughly twice that) contain a good bit more. For the ludicrously amped-up cinnamon-honey spread that gets ladled across top, bottom and middle of this sandwich — a hybrid delight that fuses the dreamiest aspects of French toast, grilled cheese and bananas foster — Mike Fitzhenry dispenses a whopping half-cup (eight tablespoons!) of roasty Saigon prime per pound of butter. The resultant mess is chalky, pitch-black and fiery. Which, in this case, is a good thing.
ALSO TRY: Green Madame