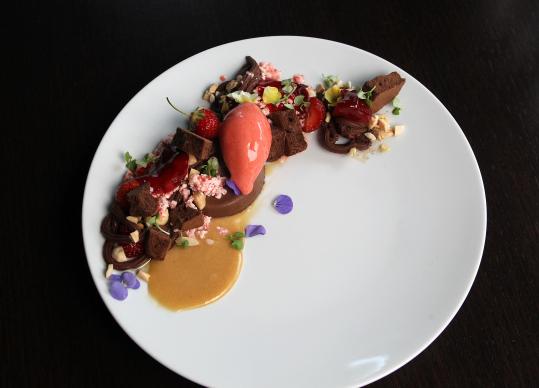 Noma has been named the best restaurant in the world three years in a row by Restaurant magazine. It also happens to be located in Copenhagen, and it is currently booked through September. In other words, you are probably not going to be eating there any time soon. But you can taste the influence of Noma — and many more of the world’s finest restaurants — here in Boston. This is thanks to the stage, a culinary apprenticeship that can last anywhere from a few days to a few months. (The French word is pronounced “staahj.”) Generally unpaid, these stints give young cooks an opportunity to practice their craft in the kitchens of masters.

Learning how many employees of local restaurants have spent time at prestigious establishments — Daniel and Per Se in New York, the French Laundry and Chez Panisse in California, Arzak in Spain, and the Fat Duck in England, to name just a few — gives one a sense of the depth of knowledge in Boston’s culinary community.

“It’s priceless. It cannot be measured,” says chef Tim Wiechmann of the value of the stage. Early in his career, Wiechmann — who operates T.W. Food in Cambridge and is planning a new restaurant, Bronwyn, in Somerville — completed stages at restaurants including Paris’s Taillevent, L’Atelier de Joel Robuchon, and L’Arpege. “Being the lowest man in a restaurant really opens your eyes to how everything works. Especially in difficult restaurants like those were, you gain a respect for how it all gets done and how the good places succeed.” Years later, his experiences continue to inform the way he runs his own restaurants — “except I don’t yell at anybody,” he says.

The work is rarely glamorous — as Wiechmann points out, stagiaires are the lowest people on the totem pole. But those who work the hardest at mundane tasks, who make themselves truly useful, are often rewarded with more-interesting opportunities.

When former L’Espalier sous chef Alex Crabb did a stage at L’Atelier de Joel Robuchon, “I spent a lot of time cleaning the basement walls, but it was, ‘Hey, I’m cleaning the basement walls in Paris. This is pretty cool!,’ ” he says. Crabb’s other stages have included Noma, wd-50 in New York, and, as a student at the Culinary Institute of America, the French Laundry. He will open his own restaurant, Asta, in Back Bay this fall.

Stages can help participants improve their culinary techniques. For instance, Crabb learned to make foie gras torchon directly from French Laundry chef Thomas Keller. He now thinks of Keller whenever he prepares the dish. “I still do it his way — tying the knot for the torchon, specifically. He said to hold the torchon like you’re shaking its hand. I use that line whenever I teach kids. You disseminate the information that way almost verbatim.”

And occasionally they offer direct inspiration for dishes. A mussels preparation at Noma led Crabb to come up with his own take, where saffron-tinged mussels are served in squid ink pasta “shells” to stunning effect.

But more than anything, stages expose young cooks to different ways of approaching food and running restaurants.

Giselle Miller, of the pastry department at Deuxave, has staged at local restaurants including No. 9 Park and Clio, where she learned from former pastry chef Ralph Perrazzo. “It was more about trying to see how he is as a chef,” she says. “It’s more about working hard and learning different ways of working, and pushing myself to the limit. I’m very respectful. I don’t go into someone’s kitchen and take their ideas. But I may say, oh, I can mix this ingredient with that ingredient . . .” For example, she has seen many chefs put strawberries together with chocolate, a classic and common combination. The challenge lies in making it her own. At Deuxave, she makes a dessert called “Variations of Chocolate & Strawberry,” which includes ganache with strawberry-Barolo syrup, strawberry glace, Marcona almond butter, and more.

Miller has lined up stages this summer at Corton and Per Se in New York. She also hopes to stage at wd-50 and Eleven Madison Park, as well as Blackbird and Alinea in Chicago. “It’s an opportunity for me to learn a lot,” says the 23-year-old. “I’m young and want to become more knowledgeable and better as a chef.”

Deuxave chef-owner Chris Coombs is a big believer in the stage — he spent time as a stagiaire at Daniel Boulud’s restaurants, among others. These apprenticeships aren’t just good for employees, he says. They benefit employers, too, bringing new skills and experience back to the workplace.

“She’s young and hungry,” Coombs says of Miller. “I don’t want to lose her, but I want to keep her enticed. It’s hard to retain good help, but it’s more difficult to find new help. Somebody is going to offer her a job, but in the interim, it’s great.”

Stages can also serve, officially or unofficially, as tryouts for employment. Brian Rae began staging at Rialto when chef Jody Adams took some time away to appear on “Top Chef Masters.” Now he is the restaurant’s chef de cuisine. “I never left,” he says.

Another thing cooks pick up doing stages: a lasting community. Geoff Lukas, who works at Oleana and Sofra in Cambridge, has staged at Galvin at Windows in London and the Restaurant at Meadowood in California’s Napa Valley. He also spent time at the Fat Duck, where he learned a technique for making tomato jam that he now applies to his strawberry harissa at home. “What was really remarkable was the caliber of people in the establishment,” he says. “Everyone was very serious. These were 16- to 18-hour days optimized to get the most out of the labor force. You’d come in and it was really intense right from the word go. It breeds a certain work ethic and a level of camaraderie. Everyone follows all the people they worked with during their time there.”

The Fat Duck is also on the list of 50 best restaurants (No. 13 in 2012), which Lukas says is “like its own sort of club.” When he went to celebrate his birthday at Noma, a guy he knew called a guy who worked there, and chef René Redzepi came out to shake hands and wish him happy birthday. “There’s a certain connection and mutual respect,” he says.

Not everyone is as enthusiastic about the stage system. “A lot of kitchens abroad rely on a quantity of free labor to get a bunch of free work done, and the level of work varies immensely,” says Craigie on Main chef Tony Maws, who acknowledges that stages can be valuable for the right person in the right place for the right amount of time. But if stagiaires spend two weeks somewhere picking herbs, their education and skill levels aren’t being substantially enhanced. “Staging often means that you’ve saved some money, or your parents are sporting you, to go abroad and peel carrots and pad your resume in lieu of real, hands-on experience. It’s to the point where we’ve stopped even caring” when a stage appears on a resume, Maws says.

If anyone is equipped to comment on the value of the stage, it is Jitti Chaithiraphant, 40, sous chef at West Bridge in Cambridge. In 2006, he left a secure job at Concord’s Colonial Inn to pursue cooking. He landed his first stage at Lumiere in Newton, and one thing led to another. The short list of places at which he has now been a stagiaire extends from Maine to New Orleans and includes 5 & 10, Aldea, Arrows, Le Bec Fin, Le Bernardin, Blackberry Farm, Bobo, the Butcher Shop, Citronelle, Cochon, Coppa, Five Fifty-Five, Gilt, Gramercy Tavern, Highlands Bar and Grill, Hugo’s, Local Roots, McCrady’s, Menton, No. 9 Park, Poole’s Diner, Restaurant August, Restaurant Eugene, Rouge Tomate, Toro, Town House, and the White Barn Inn. His blog, 52weeks52stages, documents a year of staging on every day off. Along the way, he sold his condo and cars, spent 16 years’ worth of savings, interned at a farm, ate his way through the barbecue belt, and explored Vermont’s cheese trail. It has been the best decision and experience, he says. Each place he visits is a potential prototype for the one he dreams of opening — focused on sustainable food, with a farm and perhaps an inn.

“It is absolutely worth it,” Chaithiraphant says. “If anybody has a passion of any kind, they should go for it. Follow your heart and go do something.”