Chinatown spot makes it all in house 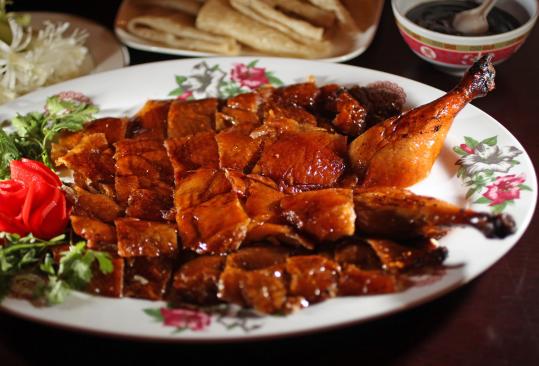 With its fire-engine red awning and “Grand Opening!” banner, China King beckons to diners. You may step inside because the place still looks brand new and shiny (it opened in April), but you will come back for homemade dumplings, scallion pie, and noodles. And if you plan ahead, for excellent Peking duck.

Owners Erwin and Doris Mei are not newcomers to the Boston restaurant scene. They own King Fung Garden 2 in Brookline, and they were behind the original (now closed) King Fung Garden. At China King, Doris Mei is at the front of the house, and Erwin Mei, and his brother, Ken, are in the kitchen, sending out all kinds of homemade specialties.

Their scallion pie ($3.95) is a thick oniony pancake that’s crisp and pleasantly chewy. It is filling, as you would expect, but does not fall into the usual trap of being too heavy or oil laden. When steamed Peking ravioli arrive ($6.95 for 8), we dive into the thick pillowy dough and juicy pork filling, and our greed is rewarded with scorched lips.

We are in the habit of rolling our eyes when fellow diners order chow mein, but we try the Shanghai chow mein ($6.95) and it bears no resemblance to the ubiquitous noodle dish on Americanized takeout menus. China King’s chow mein starts with handmade noodles, like udon but not so round or thick. The wheat-based strands, made in-house, are stir-fried with pork and cabbage for a dish that is homey and deeply satisfying.

A favorite dish is garlic peapod stems ($11.95), and in an effort to eat something else green, we go with Doris Mei’s suggestion of baby bok choy ($8.50). The halved greens are tender-crisp, stir-fried with ginger and garlic.

Our next visit is built around the Peking duck ($38), which requires ordering a full day in advance. It feeds more than three, with an order of house-made dumplings ($6.95). We couldn’t stop ourselves (this is not a place for those who are gluten-allergic or carbohydrate-averse).

On duck night, we get the whole duck to admire in its brilliant, lacquered glory, head and all. After we swoon a little, the duck goes back into the kitchen, and reemerges — just the skin this time, laid out beautifully on a platter with a pile of steaming pancakes, and decoratively fanned scallions. The crisp skin shatters in your mouth releasing a layer of rich, creamy duck fat. We fill the pancakes with duck meat and a smear of hoisin and sweet-hot chili sauce, and roll them up like thick cigars. Wash them down with a chilled Tsingtao beer.

One of our dining companions is half Cantonese, and blasphemous as this sounds, pronounces these pancakes at least as good as her mother’s.

The second duck course is a simple and delicious stir-fry of bean sprouts and meat. Finally, a flavorful, light soup, made with the meaty bones, Napa cabbage, soft tofu, and clear glass noodles, completes the trio.

We haven’t paced ourselves, and feel embarrassed by how much delicious soup is left in the pot. We’ll do better next time.

And then we remember the salt and pepper shrimp we ordered. Again. And again they never make it to the table — or into the bill.

Ah, a good excuse to return. Not that we need one.

Catherine Smart can be reached at cathj
smart@gmail.com.