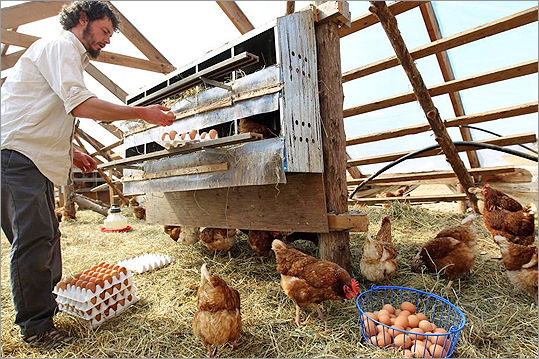 Everyone knows you can fill your vegetable bin with the bounty of Community Supported Agriculture, the program in which customers pay up front for a season of vegetables and fruits. CSA members often joke about the mountains of kale or other greens in their sacks and what to do with the abundance.

Now an increasing number of growers are selling shares for the protein portion of the plate. Options include grass-fed beef and pork from Austin Brothers Valley Farm in Belchertown, poultry from Apple Street Farm in Essex, eggs from Stony Brook Valley Farm in Granby, and fish straight from the Gulf of Maine via Gloucester-based Cape Ann Fresh Catch.

Each operates a little differently, but like produce CSAs, all enlist customers to pay when they sign up for a series of regular deliveries, helping producers to cover investments and ensuring they will have buyers when the goods come in. In return, customers get what many consider to be a different level of quality: Pork loin chops are sometimes big and thickly cut, chickens have the taste people rave about in European poultry, pristine fish never has an odor because it comes to you hours after it was pulled from the sea, and eggs have large, golden yolks.

Many customers also appreciate a range of intangible benefits: the satisfaction of supporting local businesses, having a personal connection with the people who harvest their food, and minimizing food production’s environmental costs.

“For a while, I had sworn off meat for the house. I was really bothered by large processors, how they kill the animals,” says Melissa Paciulli, 39, of Amherst. “When I found Austin Farms, that was a really important question: Is your meat killed humanely?” Paciulli also appreciates that the animals are grass-fed, for reasons of flavor as well as sustainability, and having the connection with her farmer.

A research project manager at the University of Massachusetts-Amherst, Paciulli was already buying Austin Brothers’ products at her farmers’ market when she heard about the CSA, and joined to benefit from the volume discount. Half-beef, half-pork shares range from $7.75 to $9 a pound, depending on the amount per month and duration. Farmer Mike Austin, 36, says CSA prices are lower than buying by the piece, but variations in shares make it difficult to quantify.

CSA protein prices are often higher than at supermarkets, but Paciulli considers her share a bargain. “When you switch to organic food, you’re going to pay a bit more, but in my mind, I’m paying for quality food and I’m prepaying for any health effects in the future. I can pay $1 more a pound now and a couple of thousand dollars less in medical costs later.” Austin Brothers is not an organic farm, though its animals are not fed the hormones and antibiotics that are staples of industrial agriculture.

Mary Small of Concord is of a similar mind about protein from CSA, though technically in her case it’s CSF (F stands for fish). She’s a customer of Cape Ann Fresh Catch, a nonprofit offshoot of the Gloucester Fishermen’s Wives Association, which itself is a nonprofit promoting fishermen’s interests. “It’s worth paying a little more to know what you’re getting, and that it’s really fresh. I also like supporting the local fishermen.”

Perhaps it isn’t coincidental that vegetables were the CSA gateway for both Paciulli, who gave up her vegetable share only when she decided to grow most of her family’s produce, and Small, who has been in a veggie CSA enthusiastically for a dozen years. A research aide at Brigham and Women’s Hospital, Small collects her filleted fish biweekly in the parking lot of the Morse School in Cambridge on her way home. Cape Ann Fresh Catch has been offering four 8- to 12-week shares per year since June 2009, delivering daily catch to about 20 pickup sites, most of which are open weekly. Initially, the program offered only whole fish, which members filleted themselves (a daunting task for some).

Heather Fraelick, Cape Ann Fresh Catch’s marketing specialist, says the program had more than 700 shareholders in 2011. Customers can purchase weekly or biweekly; in whole fish, fillets, or a combination; prices are in the low- to mid-$20s for two pounds (about the same as the top fish markets get). Customers also get access to irregular “Neptune’s Choice” offers of species that are not regularly offered, including scallops and other shellfish.

In addition to guaranteeing a market to the fishermen, they can also “fish the fish that are most abundant, and that they can catch on shorter trips,” says Fraelick, instead of taking longer, riskier voyages. Cape Ann Fresh Catch bought catch from 30 boats last year.

“We’re saying to them, ‘All those fish have value and we will buy them from you,’ ” she says, explaining that the fishermen’s haul of hake, haddock, pollock, whiting, and flat fish such as yellowtail flounder is less valued in the marketplace, if only because salmon, tuna, and others have been marketed more aggressively. “A lot of people don’t think they like what we provide, or wouldn’t consider them as good, but that’s because they oftentimes have never had it or had access to it as a day-boat catch,” says Fraelick, who was a shareholder before she was an employee.

The CSA protein produced by another North Shore purveyor is chicken, about 20 of them in a summer’s share from Apple Street Farm in Essex, owned by Frank McClelland of L’Espalier, two Sel de la Terre locations, and the caterer Au Soleil. The McClelland family lives there.

It is fitting that on a farm established in 1635 the chickens are from heritage stock, quite different from those raised in industrial agriculture, which favors rapid growth over flavor, according to Elizabeth Green, farm manager. The CSA’s chief mission is supplying the kitchens of McClelland’s dining empire.

A full share, from June to mid-October, costs $450; a 4½-pound bird averages $22.50. Lauren Palumbo, marketing director for the farm’s parent company, says there have been 30 takers this year, many of whom also participate in the farm’s produce CSA, which started in 2010, a year before the poultry version.

CSA protein and veggies are even more tightly linked at a pair of Western Mass. farms. Customers of Stony Brook Valley Farm in Granby can only purchase its eggs if they enroll in the vegetable CSA offered by Red Fire Farm. The symbiosis runs deep: Patrick Bensen, Stony Brook’s co-owner and farm manager, formerly managed Red Fire, and his chicks roam alternating portions of Red Fire’s pastures, recharging the soil for the next growing season.

The eggs cost more than $6 a dozen even in a 24-week share, and yet Bensen claims more than 500 customers. “People are starting to understand that there’s organic, and then there’s really top quality and what’s best for the animals. People look to us for that,” he says.

Austin Brothers, meanwhile, has been offering its CSA for three years and has about 35 customers who can pick up at a half-dozen sites, including farmers’ markets in Cambridge and Western Mass. Market sales, where customers buy meat one cut at a time, outpace the CSA, says Austin, the sixth generation working what has become a 150-acre spread.

The farm raised dairy cows until 2006, when the family decided it was prudent to sell off its 150 head rather than fight economics. They were replaced the next year by 15 cows raised for beef, a number that is up to 50 this year. Austin sells the equivalent of two cows a month. He would like to double that while growing the CSA, whose virtues include their farmers not being on demanding 15-hour selling days away from the farm.

On a sunny morning a couple of weeks ago, about 20 of Austin’s Herefords, Anguses, and Belgian Blues, including several weeks-old calves, lowed loudly as the farmer prepared a new paddock for their dining pleasure. Each half-acre patch of pasture contains a mix of canary, centenary, clover, orchardgrass, and other grasses, and even an unpracticed eye can follow the cows’ progression by the height of the grasses. The line is most pronounced, of course, between just-eaten and about-to-be-devoured, but even in eager anticipation, the cows will nuzzle up to visitors, licking an offered hand with a sandpapery tongue.

Rather than depend on feed purchased and delivered to the animals, Austin’s approach “swaps it around. You make the animals go get the feed and improve the land at the same time.

“It’s holistic management of the grass, and I really enjoy it. I’m not a grass guru; I’m just trying to do what makes sense.”

Shop here for a protein CSA from Massachusetts

A list of local farms that offer CSAs for meat, fish, poultry, and eggs.
Your comment is subject to the rules of our Posting Policy
This comment may appear on your public profile. Public Profile FAQ