Fans line up to learn the recipes, ingredients, time, and techniques these winning chefs use to make everything from brisket to pulled pork to smoked shrimp taste exceptionally good 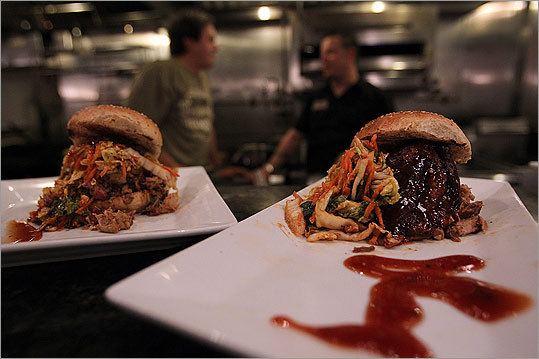 It took about 12 years, lots of hard work, and a healthy sense of youthful invincibility — seasoned with a dash of arrogance — for Andy Husbands and Chris Hart to win 30 Kansas City Barbecue Society championships, hundreds of barbecue ribbons, and the biggest prize of them all, the Jack Daniel’s World Championship Invitational Barbecue, held every October in Lynchburg, Tenn. And with the help of our IQUE barbecue teammates (our name is I que, as in “I barbecue”), we had more fun than we might even be able to remember. Now we’re ready to share the secrets that got us here. Well, most of them. Some things that happen in Kansas City stay in Kansas City.

Andy owns Tremont 647, which he opened in 1996 with Chris, who is now a software designer and professional barbecue competitor. The South End restaurant specializes in American food with global influences, or what Andy calls “food from here with flavors from there.”

When we started competing, we were part of a relatively small, devout bunch who loved nothing more than spending a few days hanging with friends, drinking bourbon and beer, playing late-night poker, cooking over live fire, and trying to prove that we did all of this better than everyone else. We still love all those things, but a lot has changed. That devout bunch is not so small anymore. Barbecue competitions have become one of the fastest growing sports in the country. The American Royal in Kansas City (Mo.) routinely draws more than 500 teams, and barbecue organizations are multiplying. We see this as a reflection not only of how many people appreciate great barbecue, but also of how many people appreciate great food.

They are now seeking out the best ingredients, whether it’s American Wagyu from Idaho or heirloom New Mexican chilies. Barbecue enthusiasts travel miles for that perfect rib or pulled pork sandwich or barbecued bologna they read about online, where they trade recipes and tips. And they spend hours, sometimes days, making that ultimate dish.

Some might call this extreme cooking. For us, it’s what we do. Our reward is that buzz you get when you push yourself to the edge. Sometimes that means standing in the middle of a NASCAR racetrack in Dover, Del., at midnight with a tornado barreling down, watching it blow by as you tend brisket and pork butts. Sometimes it means waking up every hour through a Saturday night to make sure your fire doesn’t go out because you’re having guests the next day. Always it leads to food that’s not just really, really tasty, but wicked good.

We don’t want to scare anybody off, but most of our recipes are not the kind that can be whipped up in an hour or so. We decided to assume our readers’ top priority isn’t that the food be easy, but that they want to be challenged, to do whatever it takes to make championship-level barbecue, even if they aren’t necessarily planning to compete.

For enthusiasts, food geeks, tailgaters, and anybody else who is willing to put in a little effort and then really impress friends and family, our book offers the mechanics. You might have to search for some ingredients you don’t encounter every day (oxtail, ghost chilies) and you’ll have to tend the fire diligently, but you’ll get the best ribs you will ever experience. Or you might tackle 25 steps to get to barbecued chicken; make your own sauces and rubs; smoke very large shrimp with a crabmeat stuffing or butt for pulled pork.

But trust us, it’s worth it.