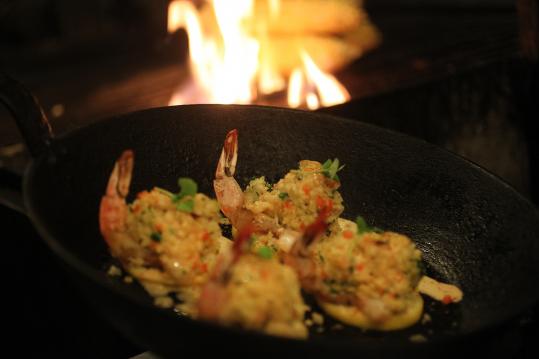 Andy Husbands and Chris Hart write that people eat with their eyes first, so when they’re in competitions, they use really big shrimp. In industry talk, standard cocktail-size shrimp are called 16/20, which means 16 to 20 per pound, each weighing an ounce or less. Here they call for U4s, meaning there are under 4 per pound. You can also use jumbo shrimp. They brine the shrimp, serve them with hollandaise sauce, and make their own rub. This version is shrimp and stuffing, without brine and sauce.

1. Shell the shrimp, leaving the tails on. Devein them from the belly side.

2. In a skillet over medium-low heat, melt the butter and add the carrot, celery, onion, and garlic. Cook, stirring often, for 10 minutes. Remove from the heat and transfer to a bowl; cool.

5. Meanwhile, place about cup of stuffing in your hands and shape into an oval. Set it inside the curve of a shrimp, wrapping the tail up and over it. Repeat with remaining shrimp. Place the shrimp on the baking sheet and set it on the grate.

6. Smoke for 8 to 10 minutes, or until the shrimp is pink and no longer translucent, or until an instant-read thermometer inserted in the thickest part of the shrimp registers 145 degrees. Adapted from “Wicked Good Barbecue”