How a tiny brewer's beers became ubiquitous in Boston 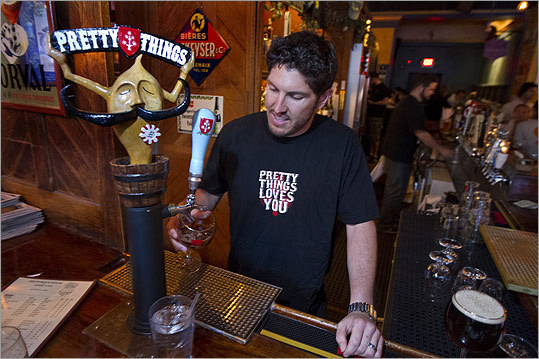 If you go out for a beer in a Boston-area bar or restaurant, chances are the beer list offers something made by Pretty Things Beer and Ale Project. The Somerville-based outfit is behind brews such as the cloudy, golden Jack D’Or, the dark ale Saint Botolph’s Town, and the hoppy Fluffy White Rabbits. In the store, the bottles are easily spotted, adorned with fanciful, hand-drawn labels.

Just a few years ago, Pretty Things was nothing more than a dream. Husband-wife team Dann Paquette and Martha Holley-Paquette brewed the first batch of Jack D’Or in 2008. They did not have great expectations for success.

“Usually, you would call yourselves a company,” Paquette says. “We called ourselves a project. We thought that way, when we went out of business, we wouldn’t look like a failure.” When Paquette sat down to make a list of who might buy their beer, he came up with 21 possibilities. Now they have about 750 accounts in Massachusetts and are making inroads in Rhode Island, New York, and Pennsylvania. They won a Best of Boston award from Boston magazine last year, and Oprah’s magazine named Jack D’Or one of the 10 best microbrews.

How did Pretty Things go from pie in the sky to a beloved local institution in such a short time? In the crowded brewing industry, where it’s a challenge to distinguish one’s products, the recipe is both simple and nearly impossible to carry off: creativity, passion, timing, a bit of clever marketing, and hard work, hard work, hard work.

“Dann Paquette has seen what it takes to make it as far as brewing great beer, obviously, but also marketing — making it something completely unique,” says Jason Alstrom, cofounder of website and magazine Beer Advocate. “The labels are fun to look at. There’s a story behind each one. And he went in a completely different direction with the beers. Most don’t fit in a style perfectly, which is a trend I see a lot of brewers going for. There are over 2,000 breweries in the US now, and for a brewery to open up and just brew a pale ale, an IPA, what’s going to set that brewery apart from the others?”

Then there’s Pretty Things, which isn’t a brewery at all.

Paquette got his first brewing job in the early ’90s and spent much of the decade working for various Massachusetts breweries, places like Ipswich Brewing Company, Mill City Brewing Company, and North East Brewing Company. “Most of them don’t exist anymore,” he says. “They went out of business. There was a bubble that burst around 2000. I got to see a lot of how to do things or not to do things. I learned the industry on other people’s penny.”

Holley-Paquette was a scientist, originally from England, where the couple moved for a few years after that bubble burst. Four years ago, they returned to America on a boat, old-school immigrants sailing into Brooklyn. They had about $8,000 between them. She landed a job at MIT, but breweries weren’t hiring. Without a few more zeroes at the end of their savings, the couple couldn’t build their own. So they became tenant brewers, as they call themselves. They rent brewery space but do their own labor, concocting and brewing all of the beer.

“This was supposed to be an in-between-jobs thing, to keep me busy,” Paquette says. “We were buying the kegs, renting the brewery, making one batch, printing labels, and then we were broke. That was all our money. It’s crazy that it kept on going. We knew if we sold that one batch we would make a profit.”

Pretty Things is brewed at Buzzards Bay Brewing in Westport. Brewing sessions are marathons that take place about once a week, to minimize trips between the Somerville office and the brewery. Last week, for instance, Paquette says he brewed more than 3,100 gallons of beer in one 16-hour day. This leaves the rest of the week for the team — which also includes Anya Kanevsky and Jim “Bocky” Barnes — to manage and promote the business.

“I couldn’t be more proud of what they’re doing,” says Bill Russell of Buzzards Bay Brewing and Westport Rivers Vineyard and Winery. (Asked what his title is, he replies, “People call me Houston. As in, ‘Houston, we have a problem.’ ”) Why have they succeeded? “It’s hard work. That’s it. It’s just hard work. I can’t think of two people who work more diligently and passionately toward building their brand and their beers in the marketplace than the two of them. And I’ve seen a lot of people over the last 25 years doing beer and wine.”

Their passion is what makes Pretty Things a creative project, not just a business venture.

Together, Paquette and Holley-Paquette draw the labels, inspired by history, folklore, and whimsy. These might feature a cartoon barley grain with an impressive mustache standing in a mash tun (this character is the eponymous Jack D’Or), a tree that appears to be growing babies (Baby Tree), a decapitated yet smiling nun holding her own head and a glass of beer (Lovely Saint Winefride), or a crooked house on stilts with a cauldron hanging off the side (Babayaga). They make videos and post them to YouTube, pastiches of images and music that have a message or create a mood. “Pretty Things are crumbs, dust, and magic,” Holley-Paquette intones in one that serves as a sort of mission statement. “Pretty Things are stinky and bitter,” Paquette says.

They have also created a community, with parties, tastings, beer launches, and other events. For consumers, it all serves to connect the beer with the people who make it. Pretty Things isn’t just another faceless company.

“We’re not marketing people,” says Holley-Paquette. “We’re not trained in any of that. We’re just very honest. We’re expressing the way we feel about the whole thing.”

And timing was in their favor. In 2007, the New Oxford American Dictionary chose “locavore” as word of the year. Interest in eating local, seasonal food was exploding. Chefs were touting their use of ingredients from area farmers and markets. Beer-centric bars such as the Publick House and Deep Ellum embraced Pretty Things. So did restaurants that emphasize local food, wanting to feature local beer that would complement their ethos.

These days the market is much more crowded. “The local brewing scene is really blowing up right now,” says Kate Baker, cofounder with Suzanne Schalow of Belmont’s Craft Beer Cellar, where Jack D’Or has been the No. 1 seller since the store opened a year and a half ago. “With Pretty Things, Night Shift, Backlash, Mystic, Idle Hands, Trillium, Slumbrew, it’s amazing to be living here right now. Everybody talks about the West Coast and New York City and the Northwest, but we’re holding our own thanks to these amazing breweries.”

Perhaps the thing that most makes Pretty Things stand out is the obvious one: They make beer that tastes good.

“Right now, the way the market is growing, you cannot come into the market with crappy beer,” Baker says. “The consuming public won’t have it. It will get squashed automatically and quietly.”

In that climate, Pretty Things just keeps growing. Soon fans will have a new beer and a new label to look forward to: This week, the project brews its first-ever IPA, to be called Meadowlark.