She has enough on her plate: The pressure to please everyone, day in and day out, has turned the family table into a battleground. 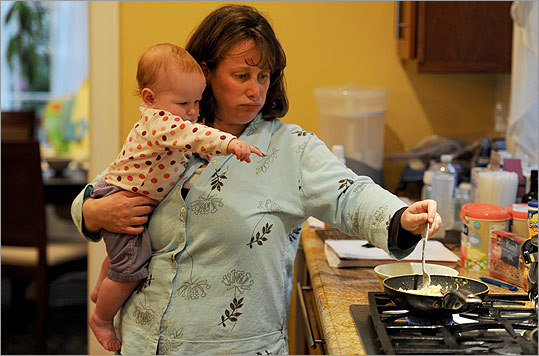 When Debbie Siegel hears her husband and their 5-year-old daughter pull into their Newton driveway at the end of the day, her stress starts to build. “I feel the tension in my shoulders,” she says.

Marital strife? No. It’s the prospect of the inevitable battle over dinner options with little Hannah. “I hope there’s not a major temper tantrum and we can just get to the table,” says Siegel, a woman confident enough to head her own company, Westchester Mortgage, who nonetheless fears a meal with her own child. “She doesn’t even allow me to get the whole menu out. She immediately stops me mid-sentence and tells me she doesn’t like what I’m making.”

What’s for dinner, mom? It sounds like the most benign question, doesn’t it? But figuring out what the heck to make, day in and day out, that will satisfy all those at the table — the carnivores, the vegetarians, the pasta-tarians — is an enormous stressor for many mothers. If you want to really make mom happy this Sunday, forget the flowers and agree to eat something other than chicken fingers — without complaining.

Here’s how dire the situation has become: An author who interviewed hundreds of moms says dinner angst ranks among the big three worries for mothers, up there with not wanting to have sex with one’s husband and generalized “bad mom” guilt.

“Dinner throws me over the edge almost every day,” says Amy Nobile, co-author of “I was a Really Good Mom Before I Had Kids.” Nobile, of Hingham, says she takes solace in advice a pediatrician gave her years ago to judge vegetable consumption on a weekly, not nightly, basis. “I’m on a five-year-plan,” she adds.

Why is making a simple meal for one’s family so tough? Let’s start by blaming Michelle Obama for raising awareness of the importance of fresh, healthy foods, and, in the process, unleashing fast-food shame; and also the French, or at least the authors who’ve recently written books rubbing our faces in French children’s varied diets. The rise of the child vegetarian has also complicated matters by ruling out roast chicken night.

Research showing that family dinners have positive effects on child development has ramped up the pressure to have lovely group dinners, as have our own mothers, who set an example by cooking regularly (somehow the frozen TV dinners have been collectively forgotten).

An online card recently posted on Facebook sums up the situation. It shows a woman slumped over in a chair, with a caption that reads: “Why do they want dinner every single night?”

Making each family member his or her own customized meal might solve the problem, but no self-respecting mother will let herself do it — or will she?

“This is not a restaurant, you will eat what I put on the table,” Silvana Morrill, a dental assistant, tells her children — right before she makes each daughter what she wants to eat, that is. “Tonight one wanted edamame and the other wanted pasta,” she says as she shops at Target in Watertown on a recent evening. Like a lot of mothers, Morrill isn’t willing to take things to the brink and send her children to bed hungry. “I’m trying to make everyone happy,” she says.

What’s a mom to do? Many report that they’re actually relieved when forces outside their control remove their beloved offspring from the home at dinnertime, for a sports game, perhaps, or a play rehearsal. Even if the child eats junk, because mom doesn’t see it, it doesn’t count against her.

On a recent morning, Anne Irza-Leggat of Concord, the mother of two grade-school boys, confesses she was glad her 9-year-old had baseball that started at 6 that night and would simply need to eat pizza to get to the field on time.

Alas, there was a cloud on the horizon: actual clouds. “I’m worried about the drizzle,” says Irza-Leggat, an educational marketing supervisor at Candlewick Press. “It’s going to force me to call on resources which I do not have.”

Irza-Leggat says she knows she should take the long view and serve her children vegetables beyond carrot sticks and snap peas, but that would take stamina she doesn’t have. “My sister, who does not have kids, and went to [Columbia’s Mailman] School of Public Health, constantly tells me that I should make [more vegetables]. I guess it would be good if I put Swiss chard out for a week, but I don’t want to make Swiss chard for a week.”

The strain makes moms do strange things. “I’ll buy things that I know nobody will eat,” confesses Jill Smokler, author of the new book, “Scary Mommy.” “I feel better in the store when I’m putting eggplant and squash in my cart. It looks so well-balanced as I head out of Whole Foods.” Never mind that the veggies will rot in her refrigerator; at least she can tell herself she tried.

And with dinner rolling around every night, you can’t blame a woman for trying to do whatever it takes to help her get by. “People underestimate how big the dinner strain is,” says Nobile, the author. “Every time I talk to a mom about it, and she hears others are also suffering, it’s a huge relief.”