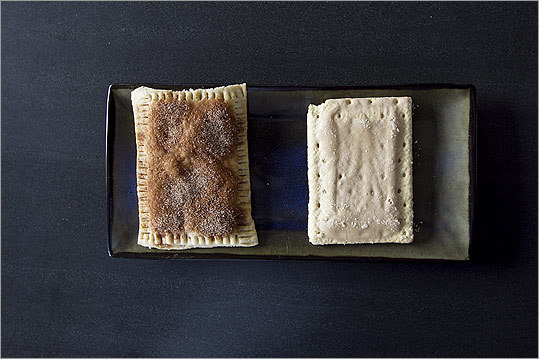 It was so easy.

“Can I take your order?” said the voice at the drive-through.

Three minutes later, for about $5, I drove off with them in a paper bag already dotted with a grease stain.

It was convenient enough, but the McDonald’s nuggets didn’t taste nearly as good as the ones I made from “The Homemade Pantry: 101 Foods You Can Stop Buying & Start Making.”

Two years in the making, the cookbook is the vision of Alana Chernila, a food blogger and busy parent based in Western Massachusetts. It’s an ode to the joy of making everyday foods at home, from condiments (mustard, hot sauce) and dairy products (butter, ricotta) to snack foods (potato chips, granola bars) and baked goods (pancakes, corn bread).

“It came about in a roundabout way. I started cooking because I needed to feed my family,” says Chernila, 33, from her home in Great Barrington, where she lives with her husband and two young daughters. “We had children when we were young, and we didn’t have a lot of money, but we wanted to have good food.”

Dovetailing with her budding interest in food, including a Saturday stint selling vegetables at the local farmers’ market, Chernila started a food blog in 2008. “Eating From the Ground Up” (www.eatingfromthegroundup.com) chronicles the virtues of home-cooking and how it affects her family.

One particular experiment inspired “The Homemade Pantry.” She saw that her older daughter, Rosie, really liked yogurt and Chernila decided she could make it herself — “with better milk and in more flavors,” she adds. The feedback from readers was so positive that Chernila knew she was on to something.

She admits the kid-friendly cookbook is not necessarily about time and cost savings; she’s OK with that. “I’ve run into this question a lot because there’s such a focus on easy and quick food,” Chernila says. “If you’re coming home from work at 6, dinner needs to be easy and quick. But at the same time, work improves the quality of what we eat. And I think we need that. The food tastes better, and it makes our lives better, too.”

To put that credo to the test, I spent some time cooking from “The Homemade Pantry.” I picked three recipes, ranging from a staple of my childhood (chicken nuggets) to my favorite breakfast guilty pleasures (toaster pastries) to a condiment I never imagined I would make (ketchup).

I felt annoyed, maybe even a little haughty, as I pulled up to the drive-through window. I was sure no McDonald’s employee had spent the past 15 minutes making homemade mayonnaise as a binding agent for the chicken nuggets.

That’s what I had just done back home. After that, I set up an assembly line: a pan of raw chicken breast cut into 2-inch chunks, a bowl of atomic-yellow mayonnaise (thanks to the olive oil and egg yolk), a plate of panko, and then my parchment-lined baking sheet. After 30 minutes of prep, the nuggets went into the oven for another 25, emerging in neat little rows like high-class cousins to the ones I ate growing up in the Midwest.

The panko gave them a nice crunch, but my designated taster and I noted that Chernila’s nuggets did not have the peppery breading you get from the McDonald’s version. The crucial difference? They tasted like chicken — and something I wouldn’t be ashamed to make for guests, especially the wee ones who don’t know how hearty chicken nuggets are supposed to be.

If you haven’t had Pop Tarts in a while, try them again. They’re kind of gross. At least that was my about-face conclusion after recently buying my old favorites, a box of the brown sugar-cinnamon variety. The filling was sickly sweet, and with an expiration date of nearly a year out, freshness clearly was not a priority.

It was a treat, then, to realize Chernila’s toaster pastries are delicious, with a dense, buttery crust. I opted to make the basic pie crust; the recipe is in the book. For the fillings, I took Chernila’s suggestions and made a cinnamon-sugar mixture and also spooned some Nutella into the dough. For 90 minutes of work, I got six would-be Pop Tarts that looked and tasted nothing like the ones I remembered.

They were a hit right out of the oven — misshapen little tarts with crimped edges courtesy of a fork — and even better the next day toasted with a cup of coffee. If you’re hellbent on uniformity in your baking, get over it. Rolling out the dough and cutting it into rectangles, you’re bound to get different sizes for each side of the pastry.

“I think perfection is so overrated,” Chernila says when I tell her about my oddly shaped confections. “Not only that, but it keeps people from cooking. That’s a tragedy. If you mess it up, throw it away and start over again.”

Full disclosure: I have never liked homemade ketchup. And yet there it is, inevitably trotted out at restaurants that pride themselves on making it in house. Why bother? For less than $2, a small bottle of Heinz does the trick.

I eyed Chernila’s recipe with suspicion — 17 ingredients, including spices I had forgotten I even owned (we meet again, celery salt) — but was pleasantly surprised by how much I liked the final product. Unlike most home-­
made varieties, Chernila’s was not overwhelmed by the cinnamon, and the two types of vinegar gave it a bite.

A side-by-side teaspoon comparison of Chernila’s recipe and the classic Heinz yielded some similarities.
Both had a slight tang, but Chernila’s ketchup had a smoky undertone, sort of like
a simple barbecue sauce. It also made the syrupy sweetness of Heinz much more apparent.

Here’s the catch: As much as I liked Chernila’s, I can’t imagine making it again. For starters, I slaved over it for two hours, and I didn’t have the heart — or extra cash — to buy 6 pounds of fresh tomatoes and instead used canned ones. Then again, I can’t remember the last time
I put a Mason jar of ketchup on my patio table and looked at it with such pride as the burgers were being passed around. I felt compelled to
tell my dinner guests a little secret: Hey, I made that.