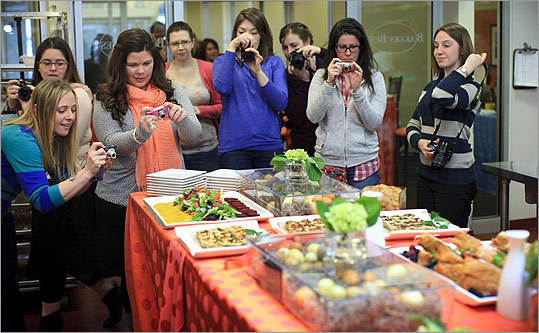 Members of Boston Brunchers photographed a recent feast prepared for them by Bakers' Best Catering in Needham. The group has about 150 members who are given free meals and blog and tweet their reviews. (Globe Staff Photo / Dina Rudick)
By Kathleen Pierce Globe Correspondent / March 7, 2012
Text size – +

NEEDHAM - They slip into the poshest kitchens for gorgeous buffets laid out in their honor. Public relations pros court them. Chefs line up to serve them.

They are not scouts for the next Food Network star or critics from Zagat. They’re not even particularly well dressed. They are bloggers who brunch, smartphones in hand and cameras around their necks. And they are in demand.

Since 2010, Boston Brunchers has grown from an informal group of scribes meeting monthly over the leisurely meal of the week, to a 150-member powerhouse that’s become one of the most influential groups in town. So much so, that restaurants comp their meals, hoping for a positive blog or tweet. In a rapidly changing media landscape, where restaurateurs and others in the food industry are struggling to compete, inviting citizen reviewers in for a gratis feed is an instant way to fuel one’s social media cred. Many of these bloggers are recent college grads who can convince the elusive 18-to-34-year-old demographic to patronize these businesses.

On a recent Sunday, Michael Baker, owner of Bakers’ Best Catering, opened his Needham commissary to a dozen fresh-faced bloggers. As complimentary Bloody Mary shooters, garnished with shrimp, are chased with sweet-potato corned-beef hash nestled in bacon cups, the feedback is im- mediate. “Delicious,’’ and “Wow,’’ they shout, whipping out their phones to dash off a Twitpic.

That the Bakers’ Best kitchen staff is madly preparing for a large Oscars party that night matters little. The bloggers are a crafty PR move for the company, which shuttered its Newton Highlands cafe in December after 28 years to focus on catering. “Bakers’ Best had one of the best brunches in the city for a long time. I wanted them to get the sense that we have the capabilities to do anything,’’ says Baker, showing off his chilled meat slicing room to the eager group. “We took care of a generation of families, of bar mitzvahs and christenings. Now they have grown up and married so we need to reach out to the next generation.’’

To that end, his chefs have created an elaborate spread of mini quiches, beet ravioli, and challah French toast. As if on cue the twitterverse lights up. “I have died and gone to foodie heaven!’’ Beth Quitadamo tweets to her 480 followers.

Across the room Taryn Collins chimes in: “Tiny bites, all incredible. #BakersBrunch.’’

These active food bloggers, tweeters, and Yelpers are gaining more clout with each passing brunch, from the Bristol Lounge at the Four Seasons Hotel to Lord Hobo in Cambridge. Here’s how welcome they are in area restaurants: “Right now we are booked all the way into May,’’ says founder Renee Hirschberg, of Waltham.

Like a smartly crafted tweet, Boston Brunchers, a food club straddling cyberspace and real life, gained steam quickly. “When 25 people showed up one Sunday at the East Coast Grill, I thought, I could have something here,’’ says Hirschberg, a Tampa transplant who wanted to meet and eat over brunch because it’s her favorite meal.

Hirschberg, who ran her own marketing company until 2009, and is now senior program coordinator at Boston University’s executive MBA program, maintains that Bostonbrunchers.com is an aggregate of mostly amateur bloggers looking for their “Julie & Julia’’ moment - or just a tasty Sunday out. For Emily Olson, a gastronomy student at Boston University and aspiring chef who blogs at whatemilycooks.com, Boston Brunchers is a chance to “interact with other bloggers and visit places that we might not have access to.’’ Those visits include America’s Test Kitchen, pizza with cookbook author Crescent Dragonwagon and an upcoming session with The Farm School in Athol to learn about spring CSAs.

Quitadamo, who works in the shipping industry and blogs at thesailingfoodie.com, joined because “I can’t talk about food at work,’’ she says, gleefully spreading a layer of lavender butter on a mini doughnut.

Although arrangements vary from business to business, Boston Brunchers do not pay for their meals, but they do leave gratuities and that second Bloody Mary is not on the house. They blog for their supper and tweet for their sweets. While bona fide reviewers, who taste anonymously and pay for everything, see this as a conflict of interest (what bad things are you likely to say when the meal is free?) Hirschberg defends the practice. “The expectation is that the brunchers will write an honest interpretation of their experience in their blogs and through other social media,’’ she says. “We’ve had a few flop dishes and we didn’t hide that. I think it’s unacceptable for bloggers not to disclose when something was given to them free.’’

“The biggest disappointment was related to my English muffin. Mine was really burnt. It would have been nice to have been able to have eaten it after it soaked up some of that amazing hollandaise sauce. (I didn’t ask for a new English muffin only because the service was so spotty.) Aside from the burned English muffin, the meal was really good. Unfortunately, our service was awful. It took a long time, about 30 minutes, to be initially seated. Taking our order took a long time as well, plus each course took time to bring out.’’

No word if her review had anything to do with the restaurant’s upcoming closing, announced last week.

Biased or not, the bloggers are considered social media gold by public relations personnel in Boston such as Adam Klein of Callanan & Klein Communications. “While each of these blogs reach a relatively small audience, it’s a very targeted audience of food enthusiasts,’’ says Klein, who handles PR for Bakers’ Best, and convinced Baker to host the group. “We would consider this to be a solid media hit.’’

This brunch generated around 165 tweets and 12 blog posts, a sizable coup for the 63-year-old owner, who doesn’t tweet himself. Chef Phyllis Kaplowitz thinks so too. “You have to get the buzz out there,’’ she says, taking a break from the kitchen to schmooze with the group.

When she tells them that she competed on the Food Network’s “Chopped’’ and will be cooking at the James Beard House this spring, the group is atwitter. “Our chef this morning was a finalist on Chopped! #IDie!’’ tweeted Quitadamo.

As the bloggers exit with tiny cartons of mini whoopie pies, the buzz echoes long after the last mimosa is drained. Quitadamo tweets on the way out: “PB and fluff mini whoopie pies? You have stolen my heart @BakersBestCater Thank you for a great day!’’

Kathleen Pierce can be reached at kmdpierce@gmail.com.

Here’s a sampling of what Boston Brunchers had to say about Bakers’ Best Catering: