A portable meal as old as fire 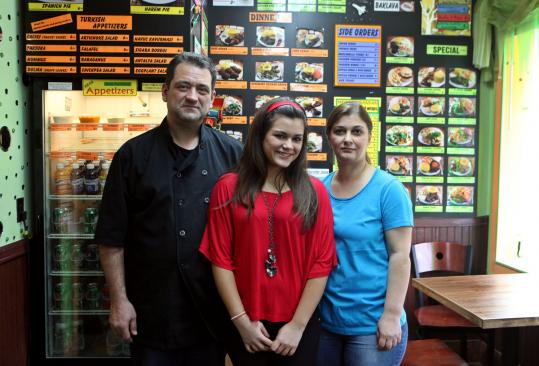 From left, Ender, Miray, and Funda Gokay at Mediterranean Turkish Food in Framingham. Above, their chicken kebab with rice, salad, and hummus. Below, lamb kebab with tomatoes, peppers, and onions at Brookline Family Restaurant; bottom, lamb kebab at Shiraz Persian Cuisine in Watertown. (PHOTOS BY MICHELE MCDONALD FOR THE BOSTON GLOBE)
By Stephen Meuse Globe Correspondent / March 7, 2012
Text size – +

Our world is one hopping place, and for all the talk about slowing down to savor meals together, the snack food, street food, food trucks, and take-away joints are proof that we’re not really listening. We’re on the move. Our food will just have to keep up.

There’s nothing modern about food with legs. The moment early pastoralists learned to string bits of lamb on a spit, grill it over live coals, and hastily hit the trail again, a culinary technique for the ages was born. Today the kebab remains one of the most popular and versatile foods the world has ever known. It makes a cameo appearance in many cuisines, but for a sizable chunk of the world’s population, it’s a marker of cultural identity.

With a resume like this, it’s not surprising that kebabs come in a variety of forms. Pick up the menu at Somerville’s hole-in-the-wall Istanbul’lu, for example, and you will see that for Turks, kebab can be a meaty stew as well as grilled meat on a spit. Almost every culture in which the kebab is esteemed makes a distinction between solid chunks of marinated meat and preparations that involve minced, spiced meat.

In Turkey, grilled meats are likely to be identified as sis (pronounced sheesh), and minced as kofte. Beyond this, you will notice some subtle and not-so-subtle differences, depending on whether your kebab is made according to Persian, Middle Eastern, Balkan, or North African tradition, all lands subject to first Arab and later Ottoman rule, or strongly influenced by these cultures.

It’s a bonus that in the Boston area, the empire of the kebab has never been conquered by national chains and remains overwhelmingly the domain of small, family restaurants.

At Shiraz Persian Cuisine in Watertown, chunky meat kebabs are called barg, the minced version kubideh. The Persian approach to rice is distinctively refined (there is a staggering number of recipes for preparing it); the process can involve both boiling and steaming, and, often, adding a saffron-hued drizzle on top. The grains, usually basmati, are dry, separate, and tender.

Salad is a more common accompaniment to Greek kebabs (sometimes called souvlaki) and North African versions; you are also less likely to encounter minced, spiced skewers, except in the form of the vertical-spit-roasted gyro (pronounced YEAR-o), a.k.a. shawarma and doner kebab, tucked with vegetables and a sauce into a folded circle of flatbread.

Your kebab may come on its skewer or deconstructed on a bed of rice or salad. Vegetables like tomatoes and moderately hot green peppers are commonly grilled separately, although onion and pepper slices frequently alternate with meat on Greek kebabs. Lamb may be the most orthodox basis of a kebab, but beef and chicken are common here, too.

Think of the kebab as a kind of nomad. It picked up influences wherever it went and it’s still on the move - with no intention of slowing down.

Simplest, cheapest Greek kebab we know. At either location, a chicken kebab sandwich means a sizzling hot skewer dropped on an iceberg salad with a bit of tomato and spoonful of feta, all covered with a pita round for $5.95. A small gratuity is included in the price. Just don’t expect a welcome. After many years of visiting the Watertown spot, no one there knows my name, or cares to, but those kebabs are just so darned good. 64 Mt. Auburn St., Watertown, 617-924-9660 and 146 Lexington St., Waltham, 781-893-8359, www.demosgreekcuisine.com

An East Cambridge neighborhood stalwart, full of regulars. The night we drop in, a dozen diners are having a good time; then the Greek dancing starts. All kebab plates are of the chunky meat variety, and there’s a shrimp option. If you don’t want your meat well done you need to say so. Salads are especially good; another 75 cents gets you a sprinkle of goat cheese. 202 Third St., Cambridge, 617-868-9098, www.desfina.com

This bright, roomy spot in Brighton Center bustles with diners. The Athanasiatis family converted it from a pizza shop years ago and now serves a menu of Greek specialties made in-house by mom Georgia, one of the best cooks we know. Kebab on salad has no peer. Linger over her authentic pastries. 344 Washington St., Brighton, 617-254-8337, www.esperiagrill.com

The gyro spits keep turning, and students keep coming. You get a lot for your money, all (except bread) made under the supervision of Beirut-born Mama Rosie, whose interpretation of the classics has a homey spin. Spicy chicken kebab sports a lightly hot twist. There’s even a burger kebab that tastes a lot like, well, a burger. Tables are seldom unoccupied; no mystery why. 133 Harvard Ave., Allston, 617-783-8100

Huseyin Akgun brings a fan club of followers to each new Turkish restaurant he opens. Two-year-old Istanbul’lu in Teele Square, Somerville, is his best effort yet. Adona kebab is an intriguing melange of minced lamb, onion, red pepper, garlic, and spices, the best we encounter, and his housemade, seeded bread served with a red pepper dipping sauce is a perfect accompaniment. The cliche hidden gem fits Istanbul’lu to a tee. 237 Holland St., Somerville, 617-440-7387, www.istanbul-lu.com

A diminutive hut once known as Subs and More stands between the road and a wrinkle in the Sudbury River, and couldn’t be more welcoming. The Gokay family has pinned photos and descriptions of menu items all over the wall as decor. Expect heaps of charm and fine execution of Turkish home cooking. 1609 Concord St., Framingham, 508-202-4688, www.mediterraneanturkishfood.com

The ambience is dignified and calm, the dishes artfully composed, the rice alone worth the trip. Housemade naan-like bread (taftoon) comes from a tandoor oven. Chicken soltani, our fave, is a skewer of barg (chunks), and kubideh (ground), with basmati rice and grilled tomato. For a pittance more, get a specialty rice. This appealing spot off the main road is not as busy as it should be. 72 Bigelow Ave., Watertown. 617-923-2222, www.shirazcuisine.com

Chain restaurants line the road connecting Interstate 495 to Tewksbury Center, which suggests nothing here is worth a stop. Locals know different. A wood-fired grill puts out Greek-style kebabs that are hot, juicy, and delicious with a smoky flair. Avgolemono, the classic egg-lemon soup, is thick with rice and satisfying. 1060 Main St., Tewksbury, 978-863-0111, www.skewerswoodgrill.com

Ozcan Ozan is the dean of Turkish chefs (he’s been cooking here since 1981) and has a popular cookbook to prove it. His Financial District restaurant is a fave of the suits who populate the area. The menu is extensive, the execution authentic. Try the spicy, succulent tavuk (chicken) adona kebab with its deeply grainy-flavored pilaf. Red beans in tomato sauce (barbunya fasulye pilakisi) is a favorite side and the hot soups are dreamy good. Parking is another matter. You may need one person to pick up the order, another to circle the block. 116 State St. Boston, 617-570-9009, www.sultans-kitchen.com