THIS STORY HAS BEEN FORMATTED FOR EASY PRINTING
Drinks Special

How about a cocktail?

The craft of mixing has made a unique Boston bar culture 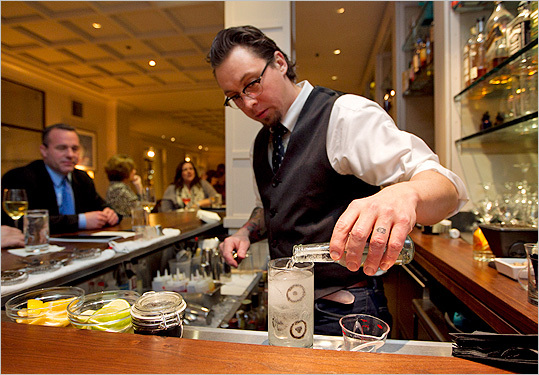 This winter, four new establishments showcasing cocktails opened in the Boston area, all within the course of a few weeks: the Hawthorne, Brick & Mortar, Saloon, and backbar. They join the likes of Clio, Drink, Eastern Standard, the Franklin Cafe, Green Street, Rendezvous, and many other local businesses serious about cocktails. In Davis Square, you’ll find the Boston Shaker, a shop that sells nothing but cocktail paraphernalia; walk into a liquor store and you’re likely to find a dizzying array of specialty spirits.

Boston has become a hub for craft cocktails - those made with fresh, quality ingredients, often reviving recipes from decades and centuries past. It’s easy to forget that until fairly recently drinks were made with neon “sour mix’’ and a bottle of bitters was nearly impossible to come by - never mind versions made in small batches by a dozen companies, in flavors from celery to sriracha.

How did Boston become a cocktail town? The transformation can be traced back to one musician’s epiphany, in 1985, in a diner in Cleveland.

Keyboardist Brother Cleve was on tour with his band the Del Fuegos (recently reunited, they play the Paradise Feb. 22). “We were having a little lunch at one of these old-school diners,’’ he recalls. “The back page of the menu said something like, ‘Try a refreshing cocktail!’ There were probably 75 or 80 drinks on it. I never even knew there were that many cocktails. . . . I remember looking at the other guys and saying, ‘What the hell is a sidecar?’ I went out and bought a bartending book right after.’’

Cleve experimented with making drinks, collecting stacks of books on the subject from used bookshops and Salvation Army stores. He eventually began bartending around town, joined up with the cocktail-centric lounge act Combustible Edison, and started DJing a night called Saturnalia at the Lizard Lounge. There he met Jackson Cannon, who booked acts for the club, and bartender-Harvard Divinity School student Misty Kalkofen, who became his protégée. Around that time, he also encountered a bartender named Patrick Sullivan at Flat Top Johnny’s. Cleve was celebrating his birthday, and he wanted a Negroni. He taught Sullivan how to make several drinks that night. “For him, it was like being in that diner in Cleveland was to me,’’ says Brother Cleve.

In 1998, Sullivan opened Cambridge’s B-Side Lounge, collaborating with Cleve on the cocktail list. Kalkofen joined them, behind the bar. Cannon went on to run the bar at Eastern Standard. Both establishments made it a mission to get locals interested in classic drinks such as the sidecar and the Jack Rose.

Restaurants were also getting ambitious with their cocktail programs, notably chef Barbara Lynch’s No. 9 Park. “For many years, the bar was just for getting a drink before you went to the table,’’ says bartender John Gertsen, who worked there at the time. Bars were becoming a draw in and of themselves, the alternative to more-formal dining we see them as today.

Gertsen is now the general manager of Drink, another Lynch project, where cocktail choice is not dictated by a list but rather arrived at through conversation with a bartender. Kalkofen, who also worked at Drink, is bar manager at Brick & Mortar, which is operated by Sullivan and partner Gary Strack. Another Drink and Eastern Standard alum, Sam Treadway, manages backbar. Cannon is co-owner of the Hawthorne. At Saloon, you’ll find Tom Mastricola, who was opening bar manager of No. 9 Park. In creating the city’s cocktail culture, these bartenders banded together, learning from one another.

For instance, there was the Jack Rose Society, a group that included the likes of Cleve, Kalkofen, Cannon, Gertsen, and Scott Holliday of Rendezvous. Their intoxicating mission: to rigorously test the many existing recipes for classic cocktails, then create the best possible version. More recently, another generation formed the Boston Bartenders Collaborative, focused on sharing knowledge and furthering the community.

“The more information we all had, the stronger the scene was going to be,’’ Kalkofen says. “We could either grow slower on our own as individuals, or faster as a group. That’s still the case.’’

The classic cocktail movement is now widespread, to the point where online videos and television skits mock some of its more precious trappings: handlebar mustaches, a predilection for the term “mixologist,’’ an occasional air of superiority. Other cities may have more cocktail bars or a more developed scene. But Boston distinguishes itself.

“Boston is a small city, and it has a small amount of places as compared to New York or San Francisco,’’ says Brother Cleve. “But the quality is extraordinarily high. I don’t just say that because I’m from here and all my friends are running these places. Both Drink and Eastern Standard have been winners at Tales of the Cocktail,’’ the industry’s major event, which takes place each year in New Orleans.

“That camaraderie in Boston, coupled with the smallness, makes it a place where bartenders share information easily,’’ says Lauren Clark, who operated the blog drinkboston.com until she moved to Los Angeles last year. “They all know each other, they know each other’s bars, and it’s just a tighter-knit community in comparison to a place like New York, which is more ultracompetitive.’’

With four cocktail-focused businesses opening at once, the people behind them might have felt threatened. Instead, says backbar’s Treadway, he sees it working to everyone’s advantage. “All of us are benefiting,’’ he says. “It’s getting people out, getting people trying things. You have people who have become cocktail aficionados and want to try new spots. Other people will say, ‘Oh, I had this drink at Brick & Mortar. Do you think you could make it?’ All these bars are elevating things. The consumer is getting smarter and more intrigued by fresh drinks. The era of sour mix margaritas is thankfully coming to an end.’’

Another signature of Boston cocktail bars is an extreme commitment to hospitality. Cannon cites a recent example: A young couple at the Hawthorne mentioned they wanted to visit Drink. Cannon called Gertsen to tell him the two were on their way. He described them and what they had been drinking. When they arrived at Drink, the staff spotted them and ushered them in. The bartenders picked up where the Hawthorne had left off, serving cocktails that segued appropriately. “That has become a Boston move, and you don’t see it in other cities. I hope it remains a hallmark of what people think of us,’’ Cannon says.

This kind of treatment is an antidote to the cooler-than-thou attitude some may have encountered at other bars, where the order of a “safe’’ drink like vodka and soda might be looked down upon. “There is a really explicit push among the Boston crowd toward hospitality,’’ Clark says. “They’re making that their thing. There’s been a lot of blowback toward the speakeasy concept, the attitude that ‘No, I’m not going to make you that stupid drink you want.’ Boston wants to more gently persuade people to drink better, through intellect and witty conversation.’’

And so the craft cocktail movement continues to evolve. What’s next for the Boston scene? Perhaps something revolutionary: a focus on the friendly neighborhood bar.

“It was nice to have that focus on the drinks and the precision and all the fancy little tools,’’ says Brick & Mortar’s Sullivan. “But somewhere along the way, it felt to me some of these places didn’t feel as hospitable. I love a great drink, don’t get me wrong, but I was always more interested in the place than the drink. We just want to have a cool bar. We are way more interested in making friends than making drinks.’’