Where you can buy your cake and eat it, too 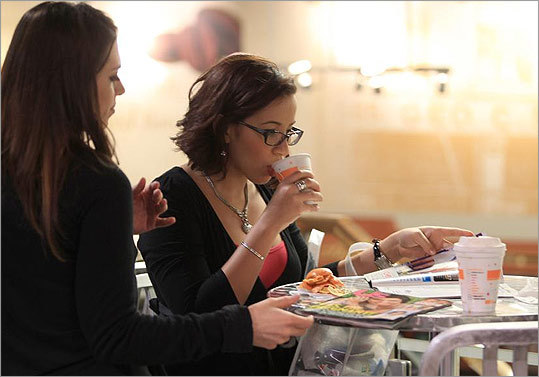 Welcome to the age of the mash-up. Your phone has swallowed the digital camera and GPS. Your home is an office. Airplanes are Internet providers. And now, you can dine at the supermarket. It’s a competitive world of blurring lines, where the most useful combo wins.

Ten years ago, Whole Foods Market, Wegmans, and the Texas chain Central Market began to experiment with bringing a high-quality dining experience into their stores. At the time, the idea of eating at a supermarket was unseemly, and it often meant a smattering of tables where you might wolf down the contents of a Styrofoam clamshell. Prepared food was intended - if you had any manners - to transport home. Now in-store dining is a new market segment, no longer something you do on the sly, but a destination for families, couples in a hurry before the movies, tired shoppers who want some- thing to eat before they hit the aisles, even the fussiest foodies. And in these waiterless situations, there are no gratuities, which contributes to attractive pricing.

As new supermarkets spring up, plans invariably include kitchens run by chefs, dining facilities, and more - in-store classes (Whole Foods in Dedham has a glassed-in Wellness Club), live music, poetry slams, wine tastings (nightly at Shaw’s at the Prudential Center), and full-fledged pubs (as at some Wegmans locations). Add fancy bakery cafes (like the excellent Tous Les Jours at H Mart in Burlington), throw in a bank and a post office for good measure, and there may be no reason to ever go anywhere else.

When the recession hit in 2008, sales of food from the aisles decreased, items per trip (known as “basket size’’) stagnated, and profits fell. Supermarkets sprinted toward the on-premise dining model that other pioneers were working to perfect. “In the past 24 to 36 months, in-store dining has become heightened, as retailers realized they couldn’t increase the basket size by simply lowering prices,’’ explains Thom Blischok, president of SymphonyIRI Group, a retail research and consulting firm. “They began these innovations to drive in-store traffic, and change the dining experience - in quality, in atmosphere, and in variety. The ambience of a chef standing back there with the hat in a grocery store said: ‘Ah! I can eat good quality food here at a good price.’ ’’

As supermarkets evolve into these strange multi-entities, restaurants are struggling to keep up. Norm Vernadakis, a director at Big Y Markets, says the 40-seat dining area at the Walpole location has become a revenue center by winning over diners. “They’re finding that our food is restaurant quality, wholesome, and you don’t need to tip our people.’’ His strategy is to beat the competition on both price and quality. “I don’t think anybody does fish and chips better than we do,’’ he says, adding wryly, “I know that will probably irritate a couple people in Boston.’’ The Walpole Big Y’s revenue from in-store dining rose 50 percent in 2010, he said, and another 15 percent in 2011. Crispy, tender, and served with authentic malt vinegar, the fish and chips are $7.99.

Across the board, supermarket companies argue (in a way that seems almost scripted) that they can create better dishes than fast-food or fast-casual restaurants, in part because they have many aisles of fresh ingredients. And in-house chefs usually have surprising autonomy to cook what they want, catering to local tastes and leveraging talents (and ethnicities) on staff.

At the Whole Foods Market in Medford, chef Amy Smith Elliott often makes food influenced by the West African and Moroccan dishes she mastered working for star-chef Ana Sortun at Casablanca, then at Oleana. Whole Foods weighs in with sales data mined from the food aisles to help predict popularity. A surge in scallops sales in the seafood department may call for more scallops in prepared dishes. Regional management also offers non-binding advice to its chefs, like the current and catchy “more plants, less meat.’’

Elliott doesn’t believe that becoming a supermarket chef is a compromise. Working with high-profile chefs “was super-fun when I was younger,’’ she recounts, “and then I hit 30 and thought, I don’t know if I can keep up with this crazy night life.’’ Her background, according to the company, is typical of many of the managing chefs it recruits. Elliott says her Medford domain is “like its own little business.’’ She is supported and supplied by Whole Foods, and above all accountable to it, but day-to-day operations and decisions, from cooking to inventory, are in her hands.

For the supermarkets, these little businesses are becoming an increasingly important revenue stream. Margins on groceries are relatively slim, but prepared foods can be sold at up to a 50 percent premium. According to Whole Foods’ annual report, nearly 20 percent of its revenue comes from prepared foods, a growing percentage of which are eaten in house.

Industry-watcher Blischok says that restaurateurs may fight back with even odder - and larger - conflations, like Mario Batali’s Eataly in New York, a multi-restaurant agglomeration mixed with a stylish, all-Italian culinary mall.

While the struggle to attract customers continues, supermarket dining remains a relatively inexpensive night out. Restaurants are the competition, and supermarkets are out to win.