Coffee drinkers unwilling to starve the habit that gets them going 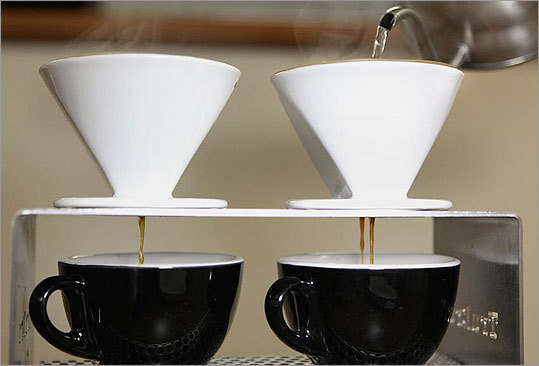 CAMBRIDGE - Most weekday mornings, you can find Steve Smriga, 34, of Somerville, at Area Four in Technology Square buying coffee, though occasionally he springs for a cappuccino. He loves the foam-topped coffee, but says, “These get expensive over time.’’

If you have ever wondered what Bostonians drink in the morning, here is the answer: We wake up to coffee, we are willing to splurge on foamy lattes, and we continue to sip iced coffee despite wintry temperatures. That so many folks are willing to spend as much as $6 a day on a morning beverage is curious in a weak economy. Some people say they like to reward themselves, particularly on workdays. These are the results of an informal survey, polling commuters in the Financial District, and at a few locations in Cambridge, Newton, and Wellesley.

We are doing what everyone else in the nation is. According to NPD Group of Rosemont, Ill., coffee is the most frequently consumed morning beverage and more people are drinking it outside the home. “Coffee has become fast food,’’ says Harry Balzer, NPD Group’s chief food and beverage industry analyst. Even McDonald’s serves hot and cold premium roast coffee, lattes, and cappuccinos.

Balzer says the trend is toward cold drinks. “Hot takes effort.’’ While soda was the fastest growing category of cold caffeine in the 1990s, in the last 10 years that has been predominantly cold coffee drinks and iced tea. Balzer also sees a trend in more lattes.

Most cold coffee beverages are milky-creamy; many are flavored French vanilla or hazelnut. One sipper says an iced drink doesn’t burn her lips; others say they can drink it faster. Brooks Chamberlin, 25, of Newton, gets a Dunkin’ Donuts iced coffee near work. “Iced is watered down and not as strong,’’ he says.

If they are headed to work or not, people have established morning routines, choosing the same brew at roughly the same time. Most stick with what they know. These morning folks readily admit to caffeine addiction. Southborough resident Jennifer Stephens, 26, returns from walking the dog and coffee’s ready in a coffeemaker programmed to brew at 6:15 a.m. “If I don’t have it I’m sluggish,’’ she says. At Au Bon Pain cafe in South Station, Sonia Pierre, 47, of Hyde Park, fills her thermos with coffee, light cream, and sugar. “It’s what keeps me awake,’’ she says. She needs a caffeine boost, but recently switched from Starbucks because that was “too much of a jolt.’’

At three coffee shops - Karma Coffee in Sudbury, Thinking Cup across from Boston Common, and Dorset Cafe in Wellesley - lattes (one-third espresso to two-thirds steamed and foamed milk) and other espresso drinks account for more than half of morning coffee sales. With the greater proportion of milk in a latte, says Karma owner David Conboy, “most people choose skim.’’ Brewed coffee drinkers, on the other hand, tend to reach for whole milk or half-and-half to lighten their cups.

Sue Khudairi, co-owner of Dorset Cafe, thinks convenience is one reason for the popularity of lattes. “The milk is already in there and it’s hot,’’ she says. Perhaps the diluted beverage - often sweetened with a drizzle of caramel - appeals to people who don’t like coffee all that much, but crave the caffeine. Tea drinkers are not left out: Khudairi says most morning tea orders are chai lattes.

The fact that espresso drinks run a few dollars more than a cup of joe does not seem a deterrent. “People think, It’s part of my day, and they’re willing to spend money on it,’’ says Conboy. John Bigay, 46, of Concord, agrees: “Sometimes I’ll go small stretches and get a regular coffee or make it at home, but I break down because I really like lattes.’’

Some resist. Tas Shakir, 26, of Waltham, says, “There’s a strong coffee culture at work, but I’m trying not to succumb.’’ She fixes herself a cup of Indian black tea every morning.

For those who need not rush to work, savoring a cup of java is a pleasing ritual. Most weekdays, Marlo Winthrop, 42, of Wellesley, drops her children off at school and heads to Dorset Cafe for coffee and a scone. “It starts the morning, then I’m off on my day,’’ she says. One 70-year-old woman says her husband makes a pot of coffee every morning and they drink it in bed.