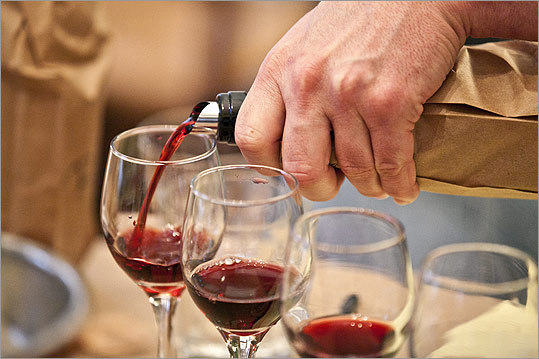 THE MARKET IN wine opinion may be a busy one, but traffic in information about the kind of wine most people drink from night to night - red and white bottles at or under $12 - is far less brisk. To fill that gap, we created an event we call Plonkapalooza, in which three of Boston’s sharpest professional palates help us identify our market’s biggest values in little wines.

Over the course of a long afternoon, with ham sandwich chasers, panelists sip 25 whites, followed by 25 reds, exchanging observations, and taking notes before settling down to select five wines in each category that most closely approach their ideal of quality and value. The highest score any wine can earn is four votes (one from each judge). Joining me on the panel for this year’s event, our seventh, were Liz Vilardi, partner in Central Bottle Wine + Provisions and a partner and wine director at the Blue Room restaurant, both in Cambridge; Betsy Ross, sommelier at Meritage restaurant and wine director of the Boston Harbor Hotel; and Chris Graeff, beverage director at restaurants Lumiere in West Newton and Area Four in Cambridge.

Our goal is to highlight generally small-producer, lesser-known wines at a price most consumers will consider appropriate for informal occasions and simple weeknight suppers of soup, pasta, or roast chicken. Inevitably, an upper limit of $12 eliminates many worthy wines whose price may be just a dollar or two higher, including those from regions such as California, where production costs are endemically high. While we provide the undiscounted, single bottle price for each wine, discounts of 10 percent and even 20 percent are typical when purchasing by the case, mixed or uniform.

The outstanding performance by two wines from the Abruzzo went some way in redeeming the red category from a weak performance last year, when opinion was more divided, and panelists expressed concern that a large number of reds seemed unconscionably sweet and flabby. At this year’s tasting, sommelier Graeff had a different view. “Not all of [the reds] were paragons of the craft, to be sure, but many were in a more traditional style, as opposed to being riddled with hopelessly oaked fruit and sticky sweet textures,’’ he said.

On the downside, at least two wines were frankly corked and so were thrown out of contention, and several others - in both categories - proved so eccentric that panelists wondered aloud whether they too were faulty in some way. Among them were the 2009 Fontezoppa Verdicchio di Matelica, the 2010 La Murola Ribona “Andrea Baccius Q’’ IGT Marche Bianco, the 2009 Domaine Philemon “Croix d’Azal’’ Gaillac, and the 2007 Le Roc “Le Classique’’ Fronton.

The panel fussed about many of the whites seeming timid, with little beyond “citrus notes, acidity, and some hint of minerality’’ as taster Vilardi noted. For sommelier Ross, this was not necessarily a drawback, since, in her view, “a common theme of bright acidity throughout made for good food wines.’’

The biggest surprise came in the white’s fourth flight, where two Austrian gruner veltliners and three German rieslings were bunched. The group’s racy acidity, pristine fruit, and overall composure visibly perked up the panel. In the end, the tasters distributed nine of their 20 votes among this flight alone. The darling: Linden’s delicious, delicate Mosel riesling.

To assemble the 50 wines, we asked five retailers to nominate bottles selling at or under $12 (at standard retail markup) that combine outstanding value with good availability. After eliminating duplicates, we purchased five reds and five whites from each shop, sorted them from lighter to heavier, then bagged them up to conceal their identities. Starting with the whites, the panel worked through all 50, five at a time. Wines are not identified until all scores are recorded.

Even for experienced tasters, evaluating and commenting on 50 wines in an afternoon makes for a bit of a slog. Maintaining concentration so that every wine gets a fair shake is one challenge; another is finding the few words that give each wine its due, but no more. Making a final decision on which deserve to be singled out as best in show is often conflicting. Tasters are not expected to identify the wines, though lots of guessing goes on. Conversation is limited to the conclusion of each flight and is often very lively indeed.

Panelists employ their own standards in judging which wines go to the top of the list. Ross said she based her final impressions “on value and how the general consumer would think of them.’’ Graeff wants to “highlight wines that are strong in character, confident in composition, and good for a myriad of situations.’’ For Vilardi, value means “balance, uniqueness, small production, and an even hand in the vineyard - all tall orders at this price point.’’

Tall maybe, but not impossible.