Time to get messy

If there is an element of Boston that questions how or where a Texas-style barbecue joint could fit into this region of lobster, shrimp, and chowder, you won’t find Tiffani Faison included among the skeptics. And that’s not just because the chef, at 35 a veteran on the Boston food scene who was a runner-up on the first season of “Top Chef,’’ happens to be opening a Texas-style barbecue joint here.

“It’s because I know what it’s like to feel out of place but know deep down inside that when people got to know me they’d get me,’’ she says.

Such is Faison’s hope for Sweet Cheeks, set to make its debut next month near Fenway Park close to the intersection of Boylston and Brookline streets. It will join a smattering of other barbecue spots, including Blue Ribbon BBQ and Redbones, in a region not exactly known for asking diners to strap on a bib, get good and messy, and then lick their fingers clean.

She wants people to get it, to get that barbecue will fit in Boston because it’s good and because Bostonians appreciate simplicity and unusual (for New England) things.

The restaurant, which will feature pork, beef, and chicken in the form of brisket, ribs, steaks, sandwiches, wings, and more, as well as mounds of slaw and sides including Faison’s mom’s homemade mac ’n’ cheese, has been fashioned after legendary places she visited as a child.

“There was the brisket in Franklin, Texas, the beef ribs at Black’s, the pork ribs at Salt Lick, the chicken at Meshack’s in Dallas,’’ she says, her eyes lighting up and voice sharpening with the fervor of Benjamin Buford “Bubba’’ Blue, the affable soldier in the film “Forrest Gump,’’ whose entire civilian life revolved around the many ways to prepare shrimp.

Her father was a career soldier. She was born on a US military base in Germany. And Texas, with all those barbecue joints? It was just a joyful, if brief, stop on a long, growing-up tour that took her from Germany to Lawton, Okla.; Monterey, Calif.; Crete, Greece; back to Lawton; Wichita Falls, Texas; Santa Rosa and Berkeley, Calif.; Boston; Las Vegas; Nantucket; New Orleans; Los Angeles; San Francisco; and finally back to Boston.

“We were all over the place,’’ Faison says. “And when you move around so much it can be difficult to find out who you are.’’

It wasn’t until she turned 18 and left home that she learned more about herself. On a personal level she had known she was lesbian for years, and though the idea of coming out to her family, her family with the strong military history, initially spooked her, when she did come out in her late teens, they were gracious and accepting, she says.

“I just wanted to figure out life on my own. That’s pretty typical, right?’’ she says.

The one constant throughout her journeys was food. She loved eating it, and cooking it.

When she moved to Boston, she took a job tending bar. Afterward there were stints at taverns in San Francisco, but Faison always came back to Boston. “Leaving Boston was always like a breakup for me,’’ she says. Ironic, considering it was a breakup from a long-term relationship that finally brought her back to Boston for the long haul.

“Nothing’s tough like parting ways with someone you thought was perfect for you, but I was also still trying to settle myself down, because I was at the point that all my moving started feeling like I was running from something - maybe from stability,’’ Faison says.

She landed behind the bar at Lucky’s Lounge in May 2001, before scoring the food and beverage director job a few months later at the Back Lot restaurant inside the brand new Ritz-Carlton Boston Common.

As restaurant gigs go, the Back Lot position was fine for someone wanting to climb the ranks of corporate restaurant management.

But Faison wanted to cook. And so she asked who else but Todd English for a kitchen job. English says he doubted Faison would last more than a few days before she quit.

“Learning a station is tough enough with formal training,’’ English says. “Tiffani was giving it a try with no real education in food preparation. I give her credit.’’ She stuck it out, English says, and she learned one station after another - fish, grill, meats, desserts, and so on - until she gained confidence and skills.

Three months in, Faison says it dawned on her that she was done running. “I realized, I think, that I had it in me to get better at this and make a career of it.’’

She left the Back Lot to work for English’s Bonfire restaurant for two years, before jumping ship to Perdix on Tremont Street in 2003.

And then a burgeoning relationship and that itch to not be in one place too long led her to Las Vegas, where Faison landed a job as chef de partie, under chef Daniel Boulud at Michelin Star at the Wynn Las Vegas resort and casino, and later at Tao at the Venetian.

The big difference in her move to Vegas and past moves was that she didn’t go there to escape stability. She wanted to flex her newfound cooking muscle.

It was while in Vegas that one of Faison’s bosses told her about a new reality show called “Top Chef,’’ and she reluctantly applied. Looking back, it’s likely that Faison’s no-nonsense attitude in the kitchen helped get her on the show, where she stood up to and sometimes butted heads with male contestants. From the beginning, fans of the show had a love-hate relationship with Faison, alternating between calling her too pushy and praising her for not taking guff from other contestants.

On one “Top Chef’’ blog, fans were asked to have fun making up a caption for a photo of Faison lugging dirty dishes through the show’s kitchen. Most of the joking captions involved her griping. But on another, bloggingtopchef.blogspot.com, the author wrote, “She did it! Way to go Tiffani,’’ when Faison later won a “Top Chef’’ reunion special, a feat, by the way, that made Faison the first woman to win a “Top Chef’’ competition.

“I thought it was a neat concept, but it was so new as reality TV goes, none of us knew if it would ever make it to air,’’ she says.

It did air, in 2006, and for a time became Bravo’s highest rated show.

One by one, through “quick-fire challenges,’’ the cooking equivalent of pop quizzes and dinner service challenges, the contestants were whittled away that first season till only three remained. Faison was one of those finalists. She didn’t win, but second place was enough to send her away from the show confident that she was just about ready to run the show somewhere.

She immediately returned to New England, where she spent the summer cooking at the Straight Wharf restaurant in Nantucket.

That would make a nice end to Faison’s story, except she hit the road again, this time to New Orleans to serve as executive chef in English’s restaurant Riche, then it was back to the Greek Isles, where she joined a travel company to cohost a lesbian lifestyle cruise, and then back to Sin City for a fall 2007 Vegas-worthy winner-takes-all “Top Chef’’ reunion special called “4 Star All Stars.’’ This time Faison won and collected a $20,000 prize.

But when the whirlwind ended, Faison was determined to go back to the place where she got her start, Boston. It’s where she finally matured and stabilized, Faison says. It’s where she met her partner to whom she’s engaged and frantically planning a spring wedding. It’s where, in March 2010, she landed the plum job of executive chef at the hot South End spot Rocca. But Rocca closed just nine months later. And Boston became the place where Faison conceived of Sweet Cheeks.

“Boston is an accepting city. It’s smart. And if you’re trying to sort your life out, I couldn’t recommend a better place,’’ Faison says. “Someone in Boston will tell you, ‘This is how we’ve always done it,’ and you can say back to them, ‘So try something a little different.’ And you know what? People will do it. That’s why Sweet Cheeks will work here. Being different is normal in this city.’’

James H. Burnett III can be reached at james.burnett@globe.com. Follow him at www.twitter.com/jamesburnett. 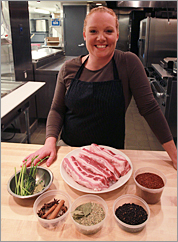 (Barry Chin/Globe staff) Tiffani Faison with various spices and rubs she used to demonstrate the brining and curing of a pork belly before smoking it.
Your comment is subject to the rules of our Posting Policy
This comment may appear on your public profile. Public Profile FAQ