With leafy greens here and French Gruyere there. Here a mousse, there a maze. Everywhere a hayride. 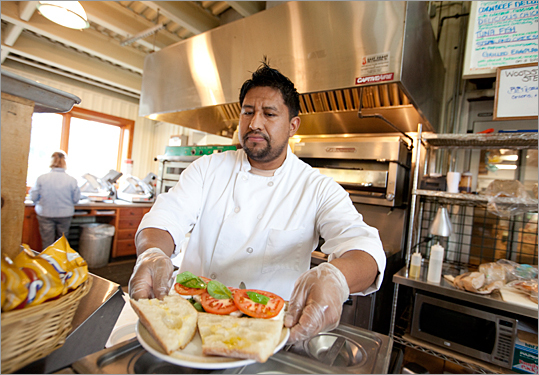 CONCORD - “We’re a farm stand, not a supermarket,’’ says Stephen Verrill, walking through the gleaming kitchen facility at Verrill Farm, where a staff of 15 turns out a variety of home-cooked foods and baked goods. Verrill Farm began as a dairy operation, started by Verrill’s parents, and Verrill works hard to maintain the farm’s agricultural identity. Still, in the interests of diversifying, he’s had to do things he’d never imagined. “My wife said, when we built our first farm stand, ‘We’re not going to take credit cards, and we’re not going to sell bananas,’ ’’ says Verrill. Now, of course, he does both.

Other farms do more. Among the simple joys of a New England farm at harvest time are homegrown tomatoes, corn, eggplant, peppers, and leafy greens. Now you also can find French Gruyere, local goat cheeses, imported butters, eggplant Parm, gazpacho, pad Thai, eclairs, napoleons, and chocolate mousse cakes. There are hayrides, corn mazes, and mini golf. And don’t forget the cider doughnuts. We’ve been waiting all year for them.

Massachusetts’s farm stands have reinvented themselves. Once modest shed-like affairs that sold fresh produce only in season, many have become year-round purveyors of food and entertainment, while the farmers behind them struggle to maintain their identities as farms. Agritourism - or, as it’s sometimes termed, agritainment - is an increasingly important factor in Massachusetts farming, and many local farms have had to diversify to stay alive.

The good news is, it’s working. Scott J. Soares, commissioner of the Massachusetts Department of Agricultural Resources, cites USDA figures that found an 800 percent increase in the estimated value of agritourism in the state between 2002 and 2007. In the same time period, he says, “We had a 27 percent increase in the number of farms.’’ The buy-local movement has helped, too, but there’s no question that farms and farm stands with value-added goods and attractions have been a boon to the state’s agriculture.

Farmers - many of whom are working land that has been in their families for generations - recognize the need to walk the line between farm, gourmet shop, and amusement park.

One of the first local farm stands to expand its offerings was Wilson Farm, in Lexington, which built its current stand - designed to look like an 18th-century barn - in 1996. Today, the farm offers cheeses, meats, prepared foods, and baked goods along with its own produce. But please don’t call it a supermarket, says Wilson’s marketing and promotions manager Christopher Previte. Yes, this farm has a marketing person.

“Some of our online reviews say we’re a big, fancy supermarket that happens to have a farm next to it. That’s hilarious, because the farm came first,’’ he says. Wilson’s history dates to 1884, and the farm stand tries to stay true to those roots. “We have some of the tropes of a supermarket, like carriages and scanners,’’ says Previte. “But everything that goes into the stand, we say to ourselves, ‘Is this true to an 1884 farm stand?’ We try to keep it as farm-ish as possible.’’

In Needham, a new farm stand is rising on the site of a former seasonal building at Volante Farms. It will follow the model that’s worked so well elsewhere: post-and-beam architecture, year-round hours, foods such as sandwiches, salads, and ice cream, and the farm’s own produce. Teri Boardman, a third-generation Volante, says she and her brothers were responding to customer demand when they decided to put up the new stand. “People have been asking us why we aren’t open year round, and we’ve been listening,’’ she says.

For many, the biggest change is deciding to stay open all year. “It was a big decision, and we sometimes wonder how smart it was,’’ says Jim Ward, of Ward’s Berry Farm in Sharon, which enclosed its farm stand in 2000. “Beets don’t draw people quite like corn does.’’ What does bring in customers, he says, is prepared foods. “It’s a sign of the times. They’re popular summer and winter.’’

Matthew Napoli, a member of the fourth generation of the Napoli family of Idylwilde Farms, in Acton, says that prepared foods are crucial to business. He says that the farm “provides a complete alternative to the supermarket. Customers can come here and not have to go to a supermarket at all.’’ On a brilliant late-summer day recently, one Idylwilde shopper was excited to discover French lentils on the shelves, while nearby, a worker explained to another shopper that a particular heirloom tomato wasn’t actually supposed to be red.

Customers have changed over the years and the farm has had to change with them, says Ward. “Our pick-your-own has drifted from serious pickers to families who want to have a farm experience and not necessarily go home with a lot of strawberries.’’ So he’s added entertainment such as hayrides and a climbing pile of hay bales. “It’s taken me a while to accept it,’’ he says, even as he notes that “giving hayrides is easier than farming.’’

He recently drew the line, though, at the pumpkin slingshot a friend suggested. “I’m not sure that’s the kind of respect for produce I’m trying to cultivate,’’ he says. “Nothing against amusement parks, but my background is farming.’’

Fresh from the farm, made on the premises