From chocolate milk to juice to soda, the number of sweetened beverages aimed at children is a growing challenge for parents 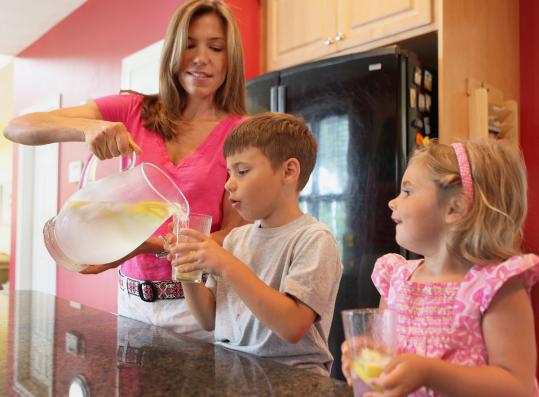 Colleen Lawton of Newburyport pours water with lemon for Steven, 6, and Brooke, 3. “They would drink juice if it were up to them,’’ Lawton says. (Wendy Maeda/Globe Staff)
By Jane Dornbusch Globe Correspondent / September 7, 2011

Refresh the world. Open happiness. The best stuff on earth. Nothing to hide. Is it in you?

Unless you’ve been living in a cave, you’ve heard them: Slogans selling drinks - all kinds of drinks - are virtually everywhere. (The examples above promote, respectively, , Coke, Snapple, Naked Juice, and Gatorade.) The marketing of beverages, particularly to children, has become so pervasive that it’s sometimes hard to remember how relatively new a phenomenon it is.

• “When I was a kid,’’ says Ann Cooper, the chef, activist, and Boulder, Colo., school food-service director who’s sometimes known as the “renegade lunch lady,’’ “there was water, milk, maybe Tang, Hi-C. Soda was rare, served in tiny bottles as a treat once in a while.’’ • Today, of course, soda, juice, juice drinks, flavored milks, sports drinks, energy drinks, and bottled iced teas are ubiquitous. There have never been so many choices in the beverage aisle - and, say the experts, so many bad choices aimed at children. •

“Those marketers have created an environment where it seems appropriate to drink these all day long,’’ says Marion Nestle, professor of nutrition, food studies, and public health at New York University. “None of this was a problem till obesity became a problem. Then it became a very big problem.’’

The association between the consumption of soda (and other high-calorie beverages) and obesity is not clear-cut. Chris Gindlesperger, director of communications for the American Beverage Association, says it isn’t fair to blame soda and other sugar-sweetened drinks for the obesity epidemic, because only 7 percent of the average American’s diet is made up of such drinks. But, says Nestle, “The reason soda is targeted is that it’s calories and nothing else, no nutritional value. . . . Research shows that people who habitually drink sodas are heavier than those who don’t.’’

Gindlesperger points to industry efforts to lower the number of sweetened beverages sold in schools: “Since 2004, we have slashed the calories available in schools from beverages by 88 percent.’’ But few would argue that the zero-calorie sodas that have in many cases replaced more sugary drinks are healthful alternatives.

Juice once seemed like a good choice for nutrition-conscious parents. But even a juice labeled “100 percent juice’’ may have added sugar. How is that possible? Look closely at a bottle of “100 percent juice’’ and you often see such ingredients as apple, white grape, and pear juice concentrate on the label, even when the juice flavor isn’t apple, grape, or pear. Those concentrates may be “stripped juices,’’ stripped of flavor, color, vitamins, minerals - everything except the sugar and water. It’s effectively sugar water, but using it allows manufacturers to label their products “100 percent juice.’’ However, though high in sugar, most juice still has some redeeming nutritional value, and Nestle says it’s “fine’’ in quantities of no more than 6 ounces a day.

Chocolate milk has come under fire lately, too (most experts agree that unflavored milk is still a good beverage choice for children who are not bothered by lactose). The dairy industry insists that kids’ milk consumption drops when flavored milk is taken out of the lunch line, but the sugar content of such milks can be comparable to that of soda (Hood’s low-fat chocolate milk contains 26 grams of sugar per 8-ounce serving; Coke has 27 grams of sugar per 8-ounce bottle). “We don’t have a calcium crisis, we have an obesity crisis,’’ says Cooper. “Let’s not lie to ourselves and say every kid needs milk so let’s give it to them with sugar. It’s like saying kids need apples so let’s give them apple pies.’’ New rules recently approved for Massachusetts schools will ban, among other things, sugary drinks and highly sweetened flavored milks as of August 2013.

Sports drinks such as Gatorade might be fine - for youngsters who are actually engaged in strenuous athletic activities. “A teenager at a soccer game or practice, that’s OK,’’ says Heidi McIndoo, a registered dietician (and mother). “But if a little kid is just riding a bike around the block, he doesn’t need a sports drink.’’

Parents can find the beverage landscape frustrating. Colleen Lawton, a Newburyport mother of two, says her children are enthusiastic consumers of the one beverage that earns a unanimous seal of approval: “My kids do like water and drink a lot of it.’’ That said, she adds, “They would drink juice if it were up to them. All kids like juice, just like they like candy.’’

And that, says Nestle, is how parents ought to view sugary drinks. An occasional soda or chocolate milk is OK; juice is fine in small quantities, and parents can always cut it with seltzer to stretch it out, dress it up, and dilute the sugar. But, says Nestle, “It helps to start thinking about these things as candy. If you think of them that way, it’s not something you want to give your kids all day.’’