Grabbing the spotlight with two hands 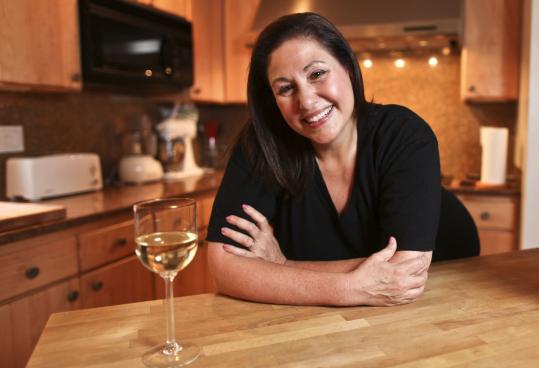 Candy Gold hosts her own show in Newton and will appear on national TV. (Aram Boghosian for The Boston Globe)
By Andrea Pyenson Globe Correspondent / September 7, 2011

NEWTON - Unlike many people who enter contests on national television with dreams of fame and fortune, Candy Gold had no such hopes when she sent her favorite sandwich recipe to the Cooking Channel.

But her star is rising. This weekend Gold will appear on the channel’s new interactive series, “The Perfect 3,’’ as a recipe contest winner for her Beef Brisket Bonanza sandwich. Gold, 54, is the producer and host of “Neighborhood Cooking With Candy Gold,’’ which was first broadcast on NewTV in August 2010 and now airs in nine Greater Boston communities. The show highlights local cooks. “Everybody is the star of their own kitchen, and everybody has food stories,’’ Gold says.

But when it comes to national prominence, she says, “I’m a Newton girl. This is where my friends are, my family. I’m very happy doing my show. I’m happy growing my show.’’

The self-described “food nut,’’ an accomplished home cook who makes up her own dishes and relies on favorite cookbooks, couldn’t resist entering the contest. Last spring her teenage son was home from school and Gold had made a brisket, one of his favorite meals. When he was assembling what his mother considered a boring sandwich, on white bread with ketchup, she happened to turn on the Cooking Channel (a Food Network spinoff) and saw a commercial for a contest. Gold immediately started working on what is now her award-winning sandwich, a concoction that includes lots of Swiss cheese, homemade pickles and coleslaw, and a caramelized onion spread with shallots, leeks, and scallions, which she calls “a schmear.’’ After two elimination rounds, one of which involved sending a video, she and her sandwich were selected.

Before launching “Neighborhood Cooking,’’ Gold worked for nearly 30 years as a journalist in radio news and freelance arts writing for community newspapers. For many of those years she was a single mother, and freelancing allowed her to be at home with her children (David, 18, and daughter Carly, 22). But in the summer of 2008, all her work dried up “in a minute,’’ she says. Gold had been on vacation, and when she returned her editors told her that due to cutbacks, they were no longer taking freelance writing. “I was devastatingly saddened by that,’’ she says.

The inspiration for her new career came about one New Year’s Eve. After cleaning up from an annual party she hosts, she turned on the television, “looking for my buddy Dick Clark.’’ Instead she found her local cable channel, and an on-screen message asking anybody with an idea for a television show to contact the station. Gold had an idea and, as it happened, several years of experience directing and producing theater.

She showed up at the station the following Monday with a proposal for a neighborhood cooking show. The station approved it, with the stipulation that she learn to run all the equipment and edit and process the tape. “They’re an amazing resource,’’ she says. “If you’re serious, they will help you do everything. They just won’t do it for you.’’

Gold was serious. She and her husband, Martin Waters, took television production classes at the station for four months. On the first day they met Jen DeCicco, theater manager at Berklee College of Music. DeCicco, who lives in Newton, is now the production assistant for “Neighborhood Cooking.’’ They also met Larry Sarner, another Newton resident, who had been working on a documentary at the station. He is now a cameraman for the show, along with Waters and Dave Polstein and Laura Johnston, two other NewTV volunteers.

The first episode they shot in April 2010 aired last August. Gold says her show is unique because “you come to my kitchen and you are the subject. You are the star.’’

The format of each half-hour show, which is shown four times a week and is shot in Gold’s kitchen, is the same. For the first 20 to 25 minutes, the guest cooks as Gold interviews him or her. During the last five minutes the two sit at a work island and chat.

Gold’s gregarious personality, which is sometimes over-the-top, gives the show much of its character and puts even reluctant guests at ease. (Full disclosure: I was on the show last winter with my son, Luke, who also writes for this section.)

So far the show does not generate income. “At some point, putting this in a situation where I get paid for it would be really nice,’’ says Gold. For now she is very happy on NewTV, and dreaming up recipes to feed family and friends.

When the camera stops rolling, Candy Gold is the star of her own kitchen.

Candy Gold will appear on the Cooking Channel’s “The Perfect 3’’ on Saturday at 4 p.m.