Pioneering from blogosphere to under the hot lights 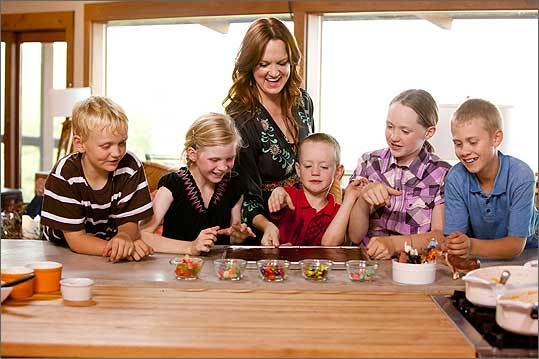 The Food Network’s new on-location series featuring Oklahoma rancher-blogger Ree Drummond, a.k.a. “The Pioneer Woman,’’ might be mistaken for a presidential campaign ad. The posed ranch work. The cowboy hats. The drawling g-less verbs. But unlike some candidates, Drummond is hard to dislike. And she is, in fact, the real thing: plainspoken, funny, and eloquent. An unexpected Erma Bombeck of the Great Plains ranch, she goes about her day, reminding us why such imagery is so powerful, and so quintessentially American.

Drummond, 42, is easygoing, confident, and unaffected, with long auburn hair, and the broad-faced good looks of a Golden Age film actress. She was raised, as she says, “on a golf course’’ north of Tulsa. She went to the University of Southern California and stayed in Los Angeles to work in marketing and public relations. In her mid-20s, in the midst of a move to Chicago, she stopped in Oklahoma, where she met her “very hunky’’ husband, Ladd, whom she calls “Marlboro Man,’’ a fourth-generation cattle rancher. “At that point,’’ she says, “it was all over for me.’’ She took up the life that she now presents so idyllically.

In 2006, Drummond started blogging daily about the large and remote ranch, raising four photogenic home-schooled children, a cast of ranch hands, friends, and family, and of course Marlboro Man. The blog ostensibly focuses on recipes. But each post also becomes a narrative of the day’s most quotidian moments and her inner life. Such blogging would be tedious - the act and adjective can have an unfortunate affinity - were the author not such an engaging writer. Drummond’s self-taught photography has become excellent, and occasionally breathtaking. Each image is treated with enough Photoshop to invite readers into a warmly saturated Technicolor romance with her food and lifestyle.

And millions of women have fallen in love. Readership on Drummond’s blog has increased steadily over the past five years. Now there are more than 4 million readers per month - with site traffic comparable to The Times of London or MSNBC.com. Her first traditionally published work, “The Pioneer Woman Cooks,’’ shot to No. 1 on Amazon’s pre-order list in 2009. This year’s follow-up, titled “From High Heels to Tractor Wheels’’ (really), is more personal, chronicling her trajectory from big-city sophisticate to lady of the ranch and kitchen. The whirlwind romance with Marlboro Man brought her to the country. (The book is scheduled to become a movie, with Reese Witherspoon channeling Drummond.)

Saturday’s premiere of the “The Pioneer Woman’’ series introduces her to an even wider audience. She cooks, she quips, she ranches. She wrangles a calf to the ground. Drummond seems utterly unfazed by either hype or her growing fame. “We live so far out in the country, in the middle of the country,’’ she explained last week in a Skype interview. “We don’t go out. I travel a bit in conjunction with the book, and then I go right back home. We don’t have fame hitting us in the face the way other people might.’’

TV stardom will test that isolation strategy. Food Network lets her tell the story and, for the most part, the network stays out of the way. She starts the season with some fun and on-message “cowboy food’’: chicken-fried steak and mashed potatoes made with enough butter, cream cheese, and heavy cream to shock Paula Deen.

But Drummond is an inventive, skillful cook, and she has a self-deprecating way of introducing rarefied ingredients and techniques to the chicken-fried steak crowd. For the tomato salad on the side, she casually mentions that the fine slicing of herbs she uses is called a chiffonade. “It just makes me feel fancy to say ‘chiffonade,’ ’’ she says with a laugh. From West Texas to Brooklyn, cooks will now be making those chiffonades.

The dream of self-sufficiency and the rough, idealized honesty of the wide-open spaces is part of what makes Drummond’s blog so appealing (and demoralizing) to read from your cubicle at work. It’s the same on television. Even from your living room, this much freedom still seems enchantingly faraway.

On: the Food Network