What used to be a leftover is now a delicious specialty

Until a couple of years ago, iced coffee usually meant a big, sweaty aluminum cylinder of the stuff, weakening as the ice melted, spigot at-the-ready. Or worse: in the fridge, bitter and over-concentrated, chilled from a breakfast pot. It was, for so long, the Rodney Dangerfield of coffee.

North Carolina roaster Counter Culture is widely credited with its renovation. In a series of posts on influential coffee blogs a couple years ago, Counter Culture evangelized a gourmet version, using a recipe the company decided to call the “Japanese iced method.’’ The conversation spread as temperatures rose in summer 2010 (Boston’s hottest on record). By 2011, another summer of record heat, baristas and their marketers had perfected their game - and their iced coffee.

Consumers are lapping it up. “Coffee sales always drop in the summer,’’ explained Nathaniel Howell, sales manager of Terroir Coffee in Acton, a supplier of high-end beans to area cafes. “This summer there’s no drop in sales. It’s because of iced coffee.’’ Managers at several locations say that about 80 percent of coffee sales this summer are iced. Though many consumers want their icy drink with plenty of milk and sugar, purists around the city drink it black.

Despite the name, the Japanese cold brew is no more common in Japan than Italy’s “Americano’’ (a mix of espresso and water) is in the United States. But it tastes much better. The Japanese method uses drip-brewed coffee with hot water (about 190 degrees), at double strength, which its adherents say allows the best development of the so-called “fruity’’ and “floral’’ high notes of the beans’ taste spectrum. The hot coffee drips directly onto ice cubes for just a few minutes and the glass is served immediately. The delicate flavors have been described as like bubbles in champagne, charming and fleeting.

A competing method has come into vogue called “cold brewing.’’ Here coarse-ground dark roast beans are mixed with cool water and allowed to steep for up to 20 hours. The mixture is then filtered to remove the grounds and sediment. Fans claim that the result is much smoother, and lower in bitter acids, with deep molasses and nut tones. It also packs a wallop; the extra time in the water can raise the caffeine level five-fold. Cold brew keeps in the fridge for hours, and is served over ice. For cafes serving in volume, that is an obvious advantage.

Cold brewing has sparked heated argument. Jaime van Schyndel, general manager at Barismo in Arlington, one of the Hub’s most exacting and perhaps nerdiest roasteries, says that cold brewing “brings out a deep base of caramel and chocolate flavors you can’t get from the bean any other way, with softer citrus and acidic notes.’’

“That’s nonsense,’’ says Terroir founder George Howell, who is widely regarded as one of the originators of the American craft coffee movement. “All you get is the caramels that come from the roast. There’s very little of the bean left. Cold brewing ruins the coffee.’’ Howell says that the characteristics that tie a bean to where it was grown - say, the brightness of an Ethiopian bean, or the pleasant blackberry of a Kenyan one - are covered over by cold brewing. But they are preserved, even heightened, by what he prefers to call “flash-brewing’’ (the Japanese method).

Consumers may not know what they’re missing. By-the-cup iced drip is rare and expensive. Dunkin’ Donuts and Starbucks (for regular iced coffee) both use large scale processes that involve elements of both cold and flash brewing. These mass retailers are striving for smooth, refreshing drinks with a nice caffeine jolt and no hint of bitterness. By using good quality beans, and careful process, they achieve it. The longevity of their concentrated coffee is also an advantage.

Of course, with your own small cone filter and tumbler of ice, your kitchen is the best place to try flash-brewing a fine Costa Rican coffee (see instructions above). Or cold-brew a dark Indonesian bean in your fridge.

Figure out for yourself which notes you like and enjoy the drink year round. On this, all roasters agree.

These guys spend all day, and night perhaps, figuring out better ways to roast and prepare coffee, using the metric system (it’s an exact science here). Aside from the occasional sourcing visit to remote coffee farms in South America, it doesn’t look like they get out much. If anyone can master cold brewing, they can. The summary: Use good-quality medium-roast beans (80 grams or 2.8 ounces), grind a bit finer than for French press, refrigerate in cold (40 degrees) filtered water for 18 to 24 hours using a flannel sock-shaped cloth. The results are like an SUV rolling through downtown San Juan: tropical blasting bass, delicious sweet citrus, so much fun. You’ll get to try Barismo’s variously exact preparations at a new Inman Square location, opening in October. Don’t ask for milk or sugar.

All the coffees here, both hot and cold, use the single-cup flash-brew method. I taste two from the excellent guest roaster du jour, Speedwell Coffee of Plymouth: the Costa Rica Helsar and a Kenya Gethumbwini Estate AB. For each, I sip one cup hot, and one iced, both black. The Costa Rica is fine hot, a bit bitter, a bit papery. Cold Costa Rica is spectacular refreshment: cool lemon notes, bright sparkly flavor. Don’t milk or sugar this one. The hot Kenya AB is smooth and comforting. But cold, it comes alive: caramel, rum, and a wild ride of a finish. Even more decadent with a bit of sugar.

“Jamaica Blue Mountain, iced.’’ As the barista announces my order and hands it to me, he adds in a low tone, “There is no other.’’ The coffee chain we love to mock has the staff on voluntary sotto voce with this one. Often called the best coffee in the world, Jamaica Blue Mountain is perhaps even more so iced, and is only available served by the cup using the single-serving Clover-extracting coffee brewer. Around $6 a cup, or $30 per half-pound for beans, it’s a bargain. Last year, the beans were $40 for a half-pound.

Starbucks will serve any Clover coffee iced (Kenya Tana River is also quite good), and offers a smooth, bright “Iced Coffee Blend’’ of beans for sale for the summer. Oddly, these are not the beans the company uses for its regular iced coffee, which is all smooth caramel - uncomplex, but quite refreshing. Just in case you need more encouragement, rivers of giant appliqué ice cubes now splash across the store windows.

Several independent coffeehouse owners say privately that they appreciate big Dunkin’s relentless iced coffee ad campaigns, which have raised demand generally for the drink. The cups are always pictured with ample milk and sugar usually added by Dunkin’s zealous employees. But the coffee is quite tasty all on its own. The company uses a large-scale process it calls “double brewing,’’ involving both hot and cold stages. Full of the simple toffee flavors that come from the roast, it is scrupulously consistent refreshment that may not exalt, but never disappoints. 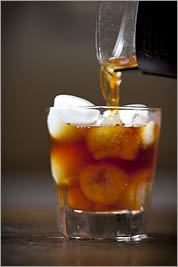