As more wineries produce kegs, more restaurants will get retrofitted for them, to save money and to offer wine drinkers quality pours 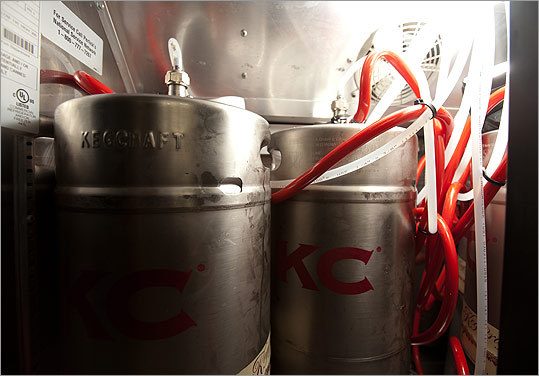 To keep pace with an industry seemingly intent on moving its goal posts, wine drinkers have repeatedly adjusted their perceptions of what serious wine is supposed to look like. Long convinced that quality wine came in bottles sealed with a real cork, we were persuaded otherwise as upscale labels adopted screw caps and synthetic stoppers. Even bag-in-box, which could be relied on to dispense ordinary (or worse) wine, turned its image around once better vineyards caught on to its virtues. Apparently, no packaging is so disreputable it can’t be rehabilitated by better quality inside.

Now the industry is poised to make us change our minds again: high quality wine is being served from a tap. That’s right, sauvignon blanc and pinot noir from kegs, not bottles, dispensed from a tap like beer and ale. The approach promises to remake restaurant by-the-glass programs by lowering costs, dramatically reducing waste (wine in open bottles deteriorates rapidly), and making the whole process considerably greener. Nearly a dozen Boston area restaurants are serving keg wine, in some cases hooking up with smaller, quality-oriented wineries to have custom blends kegged for them. But a switch won’t happen overnight.

Although draft wine has undeniable advantages for both restaurateurs and the folks who crowd their bars, implementing the system is not as simple as it might seem. Installation costs are generally high and, at this point, few wines are available by keg.

Early adopters are mostly spots that have either just been constructed or recently remodeled. At the new Area Four in Kendall Square, for example, the all-keg wine program was an important design consideration. Beverage manager Chris Graeff says it resulted from a search for value. “Costs associated with bottling and shipping go way down,’’ says Graeff, “and the wine stays fresh.’’

Keg wines here live behind the bar in a refrigerated cabinet with taps above (the fridge-tap combination is often called a “kegerator’’). Recently, nine wines were on offer, including a riesling, chardonnay, and pinot noir, each by the glass or in half-liter and full-liter carafes. At $6, $17, and $32, respectively, the prices reflect the cost savings. Few go higher.

It’s not native conservatism that’s holding them back. Restaurateurs are looking at $7,000 to $8,000 for a six-tap system. Another obstacle: special hardware fittings and tubes that make retrofitting difficult (running wine through beer lines doesn’t work). Then there are supplier issues. Though the number is growing, to date only a tiny number of wineries have made the investment in kegs and in filling and cleaning equipment. Finally, since each full-size keg provides just shy of 400 5-ounce pours, sales need to be brisk to keep the inventory turning (once tapped, wines stay fresh in kegs for two to three months). “The logistics,’’ says Dennis Gilligan of Massachusetts beverage distributor United Liquors, “are more difficult than people think.’’

In fact, a comparison with other parts of the country casts Boston in a somewhat favorable light. Dan Donahoe, co-owner of Free-Flow Wines, a Sonoma-based keg-only producer, is on track to sell close to 7,000 units in 2011. His Silvertap brand is served at a number of outlets here, including The Daily Catch at Fan Pier and Legal Harborside. Donahoe estimates that there may be no more than 200 sites in the country where wine is served from kegs, perhaps 80 of those in California, 10 in Chicago, 30 in New York. “Boston may be somewhere in the middle of the pack - but it’s definitely not behind,’’ he says.

Charles Bieler and Bruce Schneider founded their all-keg-wine New York State-based company, The Gotham Project, over a year ago. These wine business veterans saw an opportunity. Bieler says the keg phenomenon could not have happened even five years ago. He has his own ideas about what will drive it. Millennials have brought “a whole new energy, confidence, and attitude to wine that’s a fertile ground for offbeat things,’’ Bieler says. “Nothing is too strange for this crowd.’’

Wineries used to bottling their entire production have no incentive to divert wine to kegs unless they know they have a customer, Donahoe explains. But when restaurants ask, wineries listen. One such keg supplicant is the portly, voluble Dave DuBois, founding partner of The Franklin Cafe, Franklin Southie, and The Citizen Public House & Oyster Bar. Before building out The Citizen, he knew he wanted to implement a keg system. DuBois thinks it’s more than just a way to lower costs. He sees it as a vehicle for forging relationships with individual winemakers to bring in fancier wines and custom blends. “What we’re really trying to do is get top wineries to put their best wines in keg,’’ he says.

At Russell House Tavern in Harvard Square, co-owner Patrick Lee has been serving Massachusetts’ own Westport Rivers pinot blanc and rose of pinot noir from tap since opening over a year ago; wine costs $5 per 5-ounce pour. Customers are “genuinely interested and curious’’ about draft wine once it’s explained to them, he says. Lee also cites the high cost of retrofitting as a reason his group’s other restaurants, Grafton Street Pub Grill and Temple Bar American Bistro, don’t offer wine on tap.

In this region, Westport co-owner and winemaker Bill Russell may have a claim to longest continuous kegster. He began providing the system to Sel de la Terre as early as 2000 at the request of wine director Erik Johnson. If anything, the program was too successful. Russell was doing his own distribution and couldn’t keep up with the demand. Now, Westport has developed custom blends for Ten Tables and Island Creek Oyster Bar. Russell’s family also owns a brewing company, a situation that probably made him more comfortable with kegging.

The winemaker wonders how long it will be before consumers can bring their own growler to a farmers’ market to have it filled by a licensed farm winery.

On the waterfront, Sandy Block, who oversees beverage operations for Legal Sea Foods, serves two keg wines at the Harborside venue: a Chilean sauvignon blanc from the Gotham Project and a Silvertap zinfandel. Block says that establishments positioned to offer a casual, fast-paced experience have the most to gain from keg service. He sees no resistance from guests.

DuBois is sure the trend will take hold, but only as new establishments install systems and more quality wines become available in the format.

“We’ve been open one year and have five wines on tap,’’ he says. “We’ll know it’s been a success when customers start to ask, ‘What’s on tap today?’ - and mean wine, not beer.’’