Five ethnic ways to use their noodle 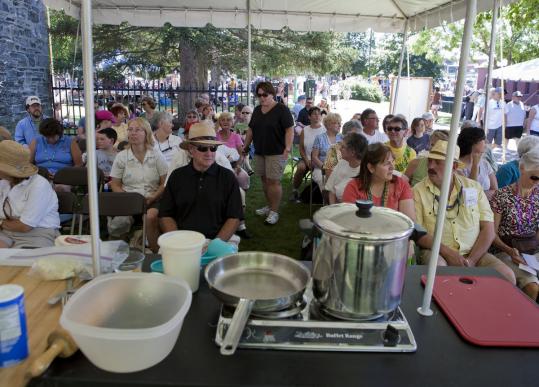 The audience for the food demonstrations Saturday at the Lowell Folk Festival were shown how to make various ethnic noodle dishes. (Kayana Szymczak for The Boston Globe)
By Jane Dornbusch Globe Staff / August 3, 2011

The foodways demonstrations that were part of the festival in its early days were brought back last year after a 15-year hiatus. Participants were given the theme of pasta, which appeared in dishes that are Italian, traditional Jewish, Polish, Cambodian, and Pennsylvania Dutch. Millie Rahn, a folklorist who helped organize the foodways demos, says the theme was chosen to “acknowledge Lowell’s connection to Prince pasta, which moved here from the North End in the early 20th century.’’

Last weekend, over the course of several hours, five local home cooks, each from a different ethnic background, took the stage in a tent set up in Lucy Larcom Park. Using a makeshift kitchen, each prepared a noodle dish while being interviewed by David Blackburn, the chief of cultural resources for Lowell National Historical Park.

The mother-and-daughter team of Lynn Hammond and Hannah Hammond-Hagman made their family’s traditional Jewish noodle kugel. The recipe has been handed down, on a torn and stained index card, for at least four generations. Mom Lynn says the recipe evolves as each cook prepares it. “What’s special about it is that everyone puts their own fingerprints on it.’’

Known as the local “pierogi queen,’’ Dorothy Naruszewicz Flanagan deftly prepared a batch of her famous specialty. “Is this a dish you’d make only for special occasions,’’ asked Blackburn. Flanagan laughed. “I know I have a weight problem now, but I’d have a real weight problem if I ate them every day,’’ she said.

The audience - highly engaged and full of questions - seemed delighted with the opportunity to watch these traditional cooks prepare authentic specialties.

Rahn says there’s more to foodways than the food itself. There’s also “the culture from which the recipes came - and the techniques and the utensils and the vessels and the traditions and stories and tablecloths.’’