In the field, a harvest showcase

Fresh and local, farm dinners are a growing trend 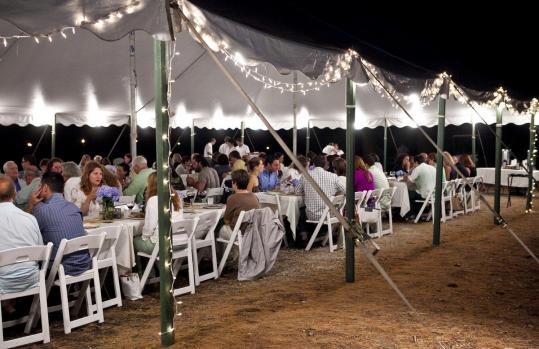 Guests dine under a tent at a recent “Whim Dinner’’ at Smolak Farms in North Andover. (Aram Boghosian for The Boston Globe)
By Bridget Samburg Globe Correspondent / July 27, 2011

NORTH ANDOVER - With a quintessential white farmhouse and pond reflecting the rows of fruit trees and hilly landscape, Smolak Farms is an idyllic setting. Here, under a tent nestled among high pine trees and pitched on ground covered in soft needles, dinner is served.

Farm dinners are a growing trend of open-air dining. Meals are served in the fields, or in some other rustic spot, close to the produce and vegetables that go into the menu. These dinners have become a way for farmers to showcase what they grow and for chefs to experiment with cooking so close to the source. And for the guests, it’s a locavore’s dream. This may be the freshest food they have ever eaten.

On this clear, cool night, farm owner Michael Smolak is hosting Anthony Bettencourt, chef at 62 Restaurant in Salem. This “Whim Dinner,’’ as the weekly events are called, features a different chef each time.

“Gone are the days when people just come to the farm and you make a living that way,’’ says Smolak, 59, who grew up on the farm. “This is a way to have value added. And we like to showcase our products.’’ In addition to a variety of vegetables, Smolak sells peaches, plums, strawberries, blueberries, gooseberries, and raspberries, which are featured in Bettencourt’s dessert.

Smolak’s grandparents bought the then-dairy farm in the 1920s. “Would my parents or grandparents envision this?’’ asks Smolak. “No, but I think they would have liked it.’’

Torches light a path past apple trees and down a small slope to where a tent is set up for 100. These farm dinners, which cost $60 (that does not include wine), are held every Wednesday night through August.

“I like to think about it as the whim of Mother Nature, not just the chef’s whim,’’ says Bettencourt.

The chef is using butter lettuce from Smolak for the base of a radish, beet, and green bean salad tossed with hazelnut vinaigrette. The beets are from a farm in Danvers. Bettencourt’s dessert, a light and tart panna cotta, is made with yogurt and cream, accompanied by macerated Smolak Farm raspberries.

Eating on the land means the chefs have to cook there, too. As Bettencourt says after the dinner, “It wasn’t without its issues.’’ For him that included a grill that was not working and learning to use a La Caja China, a wooden box used for roasting meats, something the chef had not encountered before.

Given the available equipment and no trial runs, the three-course meal is impressively orchestrated. Still, some things aren’t quite perfect. The outside rim of flavorful fat around the porchetta isn’t caramelized. But sauteed mustard greens and fresh peaches are refreshing and peppery, seasoned with rosemary from Bettencourt’s own garden. The greens were cooked in a pan over the grill. The chef improvised all night, something he is used to, even within the familiarity of his own kitchen.

At Wilson Farm in Lexington, open-air tables are set up where the farmhands can find the space. At their July dinner, planted scallions are on one side of the tables and alternating rows of green and red lettuce on the other.

“This is a great way to show off what we do in our fields,’’ say Christopher Previte, promotions manager. Dinners are prepared by the farm’s chef, Todd Heberlein, and cost $100 for five courses with wine.

Because there’s a different chef at Smolak each week, the chef can’t learn from experience. “It’s one shot and you’re done,’’ says Bettencourt.

But for Frank McClelland, chef and owner of L’Espalier, who lives on a farm in Essex, there are plenty of opportunities for refinement at the dinners he hosts on his property, Apple Street Farm. He supplies his restaurants with produce and eggs.

The chef relies on a large number of servers at his dinners, which offer the attentive service that is McClelland’s trademark. The cost is $175 with wine; dinners run into the fall. The theme for August is tomatoes, and McClelland will be tapping the 15 varieties he has planted in 1,200 individual plants (he is expecting more than 12,000 pounds this year).

“Nature is the dining room,’’ says McClelland. “It’s an extra sensation. You can see the pastures and the crops and the food. You can smell the fire burning. It’s the ultimate approach to nourishing someone.’’

Farm dinners are planned throughout the area, including at the following locations. Call for reservations and to confirm dates and times, as some may change depending on weather.