Hot on the trail of climate change 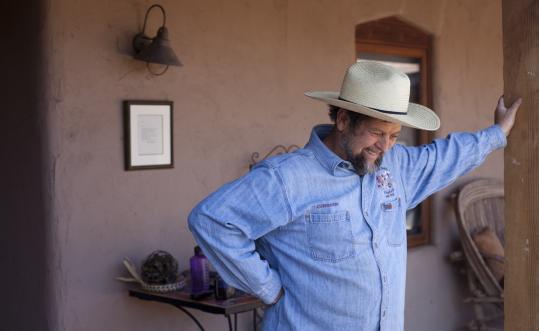 PATAGONIA, Ariz. — Some of the best known symbols of climate change are belching smokestacks and polar bears adrift on ice floes. A lesser known symbol is the chili pepper. Gary Paul Nabhan set out to change that.

In the new book “Chasing Chiles: Hot Spots Along the Pepper Trail,’’ Nabhan teams up with agroecologist Kurt Michael Friese and chef Kraig Kraft to examine the relationship between food production and global warming through the chili pepper. The authors pile into a van they call the Spice Ship, and eat their way through chili-producing regions in the United States and Mexico. They encounter mouthwatering dishes such as poblanos rellenos with grilled shrimp, ceviche, and xnipek, a Yucatan condiment made from bitter oranges and habañeros. Between culinary pleasures, Nabhan and company get an earful about meager harvests linked to extreme weather.

This town, about an hour from Tucson, is a mecca for bird-watchers. Nabhan, 59, lives on six acres with his wife, Laurie Monti, an anthropologist and nurse practitioner. He has frosty blue eyes that gaze from beneath a tumble of dark curls not unlike those of the Navajo-Churro sheep he raises. Trained in ethnobotany, the study of traditional plant uses, he identifies himself as a conservation biologist, sustainable agriculture activist, wild forager, and Ecumenical Franciscan brother. He is also the recipient of a MacArthur Foundation “genius grant.’’ He works as a research scientist at the Southwest Center at the University of Arizona, where he teaches courses and helps run Sabores Sin Fronteras (Flavors Without Borders), a program that celebrates food traditions of the United States and Mexican borderlands.

Nabhan is perhaps best known among environmentalists for his books on preserving agricultural traditions. “Coming Home to Eat’’ is a seminal text of the local foods movement, and in “Songbirds, Truffles, and Wolves,’’ he describes the experience of walking from Florence to Assisi.

The land Nabhan and Monti live on honors an ancient Middle Eastern tradition brought to this continent by Spanish missionaries. “There’s this old Arabic term that was also used by Sephardic Jews and Moriscos in Andalusia, Spain, for private experimental stations that were called almunya,’’ he says. “The original meaning was, if you were educated it was your responsibility to try out plants and different water conservation techniques and share them with your neighbors.’’ On his modern almunya, a system of terraces, called trincheras, trap the flow of water as it runs down hills. Beds are dug into the earth and the soil removed is shaped into retaining walls that further stay runoff. Water that escapes the orchard and garden flows down to agave plants, which Nabhan plans to use for distilling mezcal, the smoky spirit related to tequila.

Red Mountain looms in the distance, and Monti’s medicinal plant garden perfumes the air. A fence made from live ocotillo plants is sprouting spikes and leaves, and the flower stem of an agave points skyward like the world’s largest asparagus spear. There are few neighbors besides Native Seeds/SEARCH, a farm that Nabhan founded, and local wildlife, including black bears and mountain lions. Nabhan swings his truck by a shed and an enormous owl flies out from the rafters. “That’s why I stopped there,’’ he says.

Among the heirloom crops here are Mission-era varieties of olives, figs, grapes, almonds, pomegranates, and quince. The fruit trees provide shade for vegetables like artichokes, onions, amaranth, asparagus, and chilies. Much of his harvest ends up on the dinner table. “I do a lot of pickling and serving fresh pickles with half a dozen different kinds of vegetables for appetizers, what are called mezze in Arabic,’’ he says. “I do a lot of Middle Eastern cooking, wrapping grains in grape leaves and cabbage leaves and things like that.’’ Nabhan was raised in the Indiana Dunes on Lake Michigan and has family in Syria and Lebanon.

Traveling to research his book, Nabhan and his entourage ate raw chiltepines in the Mexican state of Sonora; these are thought to be the original chilies from which all others descend. The authors spoke with vendors who sell dried chilies from the previous year’s crop; because of drought and poor yields, they don’t have fresh ones. In Avery Island, La., Nabhan met Harold Osborn, vice president of the McIlhenny Co., producer of Tabasco sauce. Osborn recounts his bouts with hurricanes Ike, Katrina, and Rita and the storm surges that flooded his pepper fields and came within inches of infiltrating the sauce factory.

At the Patagonia farm, Nabhan is trying to find solutions to water conservation. Lucky for him, his vision for resilient farming includes elaborate mezze made with foods picked from his backyard — and lots of chili peppers.