When Dad’s in the kitchen, it’s a good day 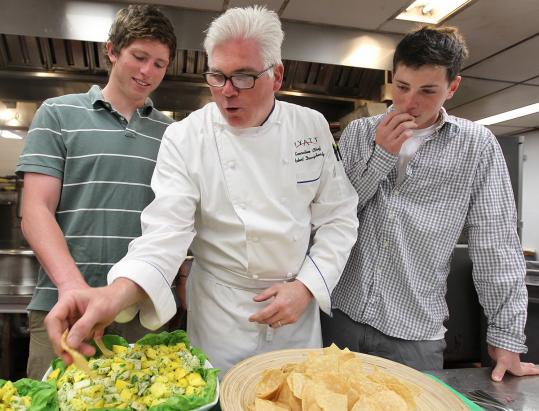 Robert Daugherty, executive chef at the Hyatt Regency Cambridge, at work in the hotel’s kitchen during a visit from his sons, Matthew, 19, (left) and Benjamin, 18. (Pat Greenhouse/Globe Staff)
By Clara Silverstein Globe Correspondent / June 15, 2011

At age 6, Maya Hanley can make enchiladas by laying out tortillas, grating cheese, shredding chicken, and shaping the filling like a hot dog, so the rounds will roll easier. Behind her with oven mitts and encouragement is her father. Jim Hanley enlists kitchen help from Maya and her sister, Fiona, 4, as often as possible.

“I’ve never been a believer in cooking meals just for children,’’ says Hanley, who earned a certificate in Culinary Arts from Boston University (and is cofounder of netBlazr, a high-tech start-up). He’s been in the kitchen with his girls since they were eating baby food. “Kids can do a lot more than you think they can at a young age,’’ he says. “As long as it’s not dangerous, they can do almost anything.’’ One accomplishment is gnocchi. “It’s basically mashed potatoes and flour, and they put their hands in it to roll it,’’ says Hanley.

This father represents a new generation who are cooking for their families. Many fathers like to go grocery shopping, prepare meals, and clean up the kitchen. On Father’s Day, they are just as likely to be planning their own feast as sitting back and letting someone else serve.

Even dads who are restaurateurs enjoy the role at home. Steve DiFillippo, owner of the Davio’s restaurants, could easily rely on his team of chefs to prepare takeout meals for his wife and four children. Yet DiFillippo, who trained at the Cambridge School of Culinary Arts before opening the first restaurant in 1985, rushes to the stove at home. “The one thing I do in the house is cook. My wife does everything else. The kids all come to me to ask me what’s for breakfast, lunch, and dinner,’’ he says.

Raised in Lynnfield and now a homeowner in Wenham and Gloucester, DiFillippo plans meals as he grocery shops. With children ranging in age from 11 to 23, he needs to cater to different appetites. “The kids come and go, or they have friends over. I like to fill up the table so they can have choices — at least one or two vegetables, a protein, and a starch,’’ he says.

Though his Portuguese mother did all the cooking when he was growing up, DiFillippo also learned Italian food from his father’s side of the family. His classical training informs his family meals, too. “Sometimes I make Hollandaise sauce and my wife says, ‘What are you doing?’ ’’ He is keeping up his skills. “I don’t want to forget how,’’ he says.

DiFillippo’s sons, Michael, 21, and Max, 11, are following their father’s interest in cooking. Michael works at Davio’s while studying at Boston University.

Spend enough time in your father’s restaurant and you may emerge a restaurateur. When Robert Daugherty, executive chef at the Hyatt Regency Cambridge, was 12, he loved visiting his father’s restaurant so much, he would hide in the back seat of his car so his father had to take him to work. Dick Daugherty, who played for the Los Angeles Rams in the 1950s, needed a job after he retired (football salaries were far from current levels). He opened David Copperfield’s in Arcadia, Calif., in an indoor mall, a new concept at the time.

The restaurant had an old English theme and served Yankee pot roast, grilled sea bass, and short ribs. Richard Daugherty focused on the business side, leaving the food prep to others. Son Robert soon changed that. “I was a little klutzy and broke dishes, so I was not too popular in the front of the house,’’ says the chef. “I went into the kitchen, and that worked out better.’’

Daugherty lied about his age to get his first job at an International House of Pancakes and eventually went on to study at the Culinary Institute of America. He credits his father’s restaurant for inspiring his career. His own two sons, ages 18 and 19, so far have not shown great interest in the business. They seem to have inherited their grandfather’s athletic ability.

“I guess that skipped a generation,’’ says their dad.

Clara Silverstein can be reached at clrsilver@gmail.com.