How did you come to head the nonprofit Farm Sanctuary?

I’ve always had an instinct to protect the smallest voices. Even as a kid, when another boy would knock over an anthill, I’d try to stop it. Animals are complicated, feeling creatures. I do this for a living, but I feel it in my bones. Someday we’ll look back at factory farming and say, “How could we do this?”

The Prevention of Farm Animal Cruelty Act, which would give confined farm animals more room, has passed in seven states and is coming before our Joint Committee on the Judiciary. Does Massachusetts have a problem?

We don’t have the problems of California or New York, but as other states adopt the bill, we don’t want their factory farms to come here.

What are the farmers’ objections to the legislation?

That it costs more. Another is that the animals really do prefer small quarters. Massachusetts has farms where each hen lives in about half the space of a piece of 8-by-11 paper. It’s hard for any caring person to believe the hens prefer that.

You’re not just campaigning for better conditions; you want us to stop eating them?

I’ve been a vegetarian for 20 years and vegan for 10. My cholesterol dropped from 200 to 144, but that’s not why I do it. In this country 98 percent of farm animals are factory-raised, and sadly, their best day is when they’re slaughtered and their suffering ends.

I can put on my doctor hat and say no. We simply don’t. All the protein we need is available from plant sources.

Yet only about 4 percent of us are vegans and vegetarians. Why?

Our whole culture is centered on meat, like brisket at grandma’s. I think lack of knowledge is a big part of it. If slaughterhouses had glass walls, we’d all be vegetarians.

One of your supporters, Twitter cofounder Biz Stone, recently made seitan bourguignon with Martha Stewart. What do you cook?

A lot of packaged vegan dinners, pasta with tomatoes, and tofu or tempeh stir-fry. I really enjoy True Bistro and The Pulse Cafe in Somerville, and my son and I get vegan pizzas at Peace o’ Pie in Allston. On a bad day I might eat french fries and chips, but don’t tell anyone. 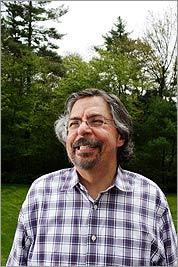