THIS STORY HAS BEEN FORMATTED FOR EASY PRINTING
99 BOTTLES 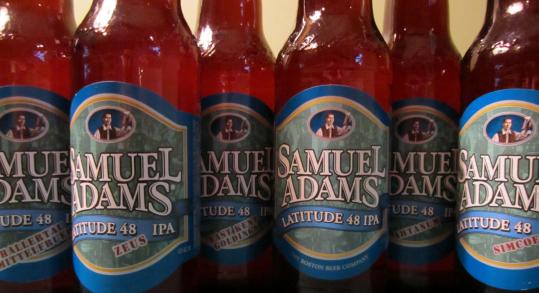 Sam Adams has blown up its IPA.

This is a very cool — and educational — development for people who love India pale ales. The has released a 12-pack called Samuel Adams Latitude 48 IPA Deconstructed. It’s basically a single-hop series in a box.

In other words, Sam Adams has taken apart the Latitude 48 hops formula to show us exactly what it’s made of. Latitude 48 contains five varieties of hops — Hallertau Mittelfrueh from Germany; East Kent Goldings from England; and Ahtanum, Simcoe, and Zeus, all from Washington state’s Yakima Valley. (The beer’s name refers to the 48th parallel north, where all these hops are grown.)

Now, this is not a new idea. There are lots of single-hop beers on the shelves, such as Founders Centennial and Weyerbacher Double Simcoe. The Danish brewer Mikkeller has an extensive line of single-hop beers, but they’re not cheap; one 11.2-ounce bottle costs about $6. With the Latitude 48 IPA Deconstructed 12-pack retailing for $13.99, Sam Adams has made it affordable to have a single-hop tasting.

Different strains of hops carry different characteristics — pine, citrus, and floral notes, for example, along with varying degrees of bittering power. With Latitude 48 IPA Deconstructed we can assess each individually. The 12-pack contains two bottles of Latitude 48 and two bottles each of beers made with a single variety of the five hops. That means you can have a tasting with friends, pour a little of each beer into a bunch of glasses, and attempt to distinguish among the various hops.

This is exactly what I did — invited some friends over and had a little tasting/experiment/seminar in which we learned a little bit about hops while drinking good beer. (If you’re going to do this, it’s a good idea to have water and crackers on hand, so you can cleanse your palate between drinks. Also, don’t drink more than an ounce or two of each beer, or else the hops and alcohol will begin to numb your tongue.)

We started with the regular Latitude, which we all consider to be a beginner’s IPA. For an India pale ale, the hops here are subdued, nothing like the in-your-face character we’ve seen from brewers like Stone and Dogfish Head. It’s a Sam Adams beer, to be sure — not too risky, with a hearty malt backbone.

Things got interesting when we poured small — maybe 2-ounce — samples of each of the other five beers. The distinctive qualities of the individual hop varieties came through.

We started with the two European hops. The Hallertau Mittelfrueh had very little aroma, a restrained bitterness, just a hint of citrus, and a clean finish, with zero aftertaste. The East Kent Goldings had fuller, earthier undertones, and a dry bitterness.

At the risk of sounding parochial, the American hops had more impact. The Ahtanum was at once piney and floral, but it was not as powerful as West Coast IPAs often present. The Zeus was very, very bitter, with strong notes of pine resin. The Simcoe was by far the most dominant hop, with intense suggestions of grapefruit and orange peel in both the aroma and the taste.

Oddly enough, we each preferred a different variety — not a bad outcome when you have a mixed 12-pack on your hands.

Double Simcoe, made by Weyerbacher Brewing Co. in Easton, Pa., is a robust imperial IPA brewed with only one variety of hops — Simcoe, of course. A bona fide hop bomb, this beer supposedly clocks in at 153 IBUs (International Bitterness Units), which is way off the charts, considering that the human tongue can detect only about 80 or 85.

Double Simcoe is a cloudy, copper-colored ale, with two fingers of foam and thick lacing sticking to the glass. I believe it when they say it’s got 153 IBUs. This is a mouthpuckering beer, bitter from start to finish, as though there were an entire grapefruit in each bottle. It’s also quite piney and has enough of a malt structure to stop anyone from calling it one-dimensional.