Burrata requires a master to make it in Vermont 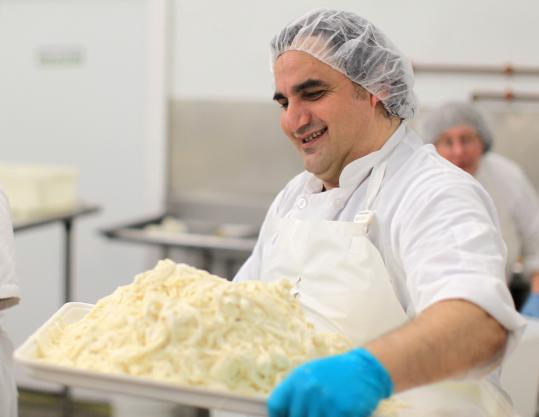 BENNINGTON, Vt. — Burrata is a cheese within a cheese, a rich combination of whole mozzarella wrapped around shredded mozzarella that has been steeped in cream. It has long been made in the Puglia region of Italy, and now a cheese maker from there is producing it in this corner of the Green Mountain State. Slice into a fresh ball of Domenico Marchitelli’s burrata at Maplebrook Farm and a creamy mixture spills from the semiliquid center. You need a slice of bread to mop up every last drop — but first sit down, because you may go weak in the knees.

“We imported the maker, not the product,’’ says Michael Scheps, co-owner of Maplebrook with Johann Englert, both of whom have Italian roots. Scheps is the third generation in his family to make mozzarella. His grandfather had a large plant in New Jersey, and his father, Al, makes mozzarella for Al Ducci’s Italian Pantry, a gourmet shop in neighboring Manchester. Maplebrook mozzarella is in many Boston stores and used by restaurateurs. Burrata is handmade for a small number of shops around Boston and is just gaining traction on menus.

Maplebrook Farm is not a farm with cows, but a plant. And the air inside is warm and heavy with the sweet smell of dairy. Orbs of mozzarella bob in vats of water and plastic buckets spurt whey from drainage holes in their sides like so many watering cans. In a few hours, the curd will remain behind as ricotta. Cheese maker Marchitelli, known as Mimmo, has expressive eyes, rounded features, and except for blue industrial gloves, a white ensemble from hairnet to boots. He bears some resemblance to the attractively plump balls of cheese he so deftly creates.

Burrata, says Marchitelli, was first made by resourceful cooks using up old cheese. In Puglia, mozzarella is made shortly before being eaten. “They make a little bit every day, fresh,’’ he says. (Scheps or Englert translate for Marchitelli, who speaks only Italian.) Those “that were extra, the next day they couldn’t sell them. So instead they would make them into little pieces.’’ That shredded mozzarella, called stratchiatella, is moistened with cream and rolled inside fresher cheese to become burrata. “But now you don’t do that any more,’’ he says. “You use fresh ingredients.’’ Both wrapper and filling begin with newly made mozzarella.

Workers are shredding mozzarella for stratchiatella, creating what looks like a lily white pile of pulled pork. Someone stands at the ready with a scooper. Marchitelli lifts a handful of curd from its warm bath, which keeps the cheese pliant, and he shapes it into what looks like a small, stark-white pizza. He stretches this floppy canvas using two fingers from each hand as his assistant plops a dollop of stratchiatella in the center. With a series of motions worthy of a card shark, Marchitelli seals the cheese and pinches off the excess.

“It’s a product that doesn’t precisely go with another product,’’ says Marchitelli. “It’s universal. You can match it with whatever you want.’’ In Puglia, he says, burrata is eaten as part of antipasto or for dessert along with melon or strawberries. Much of the cheese’s appeal is its texture. The slight snap of the firm outer layer juxtaposed with the velvety, moist interior creates a surprising combination. The flavor is not complex; you have to wonder how something so mild can be so delicious.

Maplebrook has been making mozzarella since 2003. Just when customers began to request burrata, Marchitelli’s wife, Ida, contacted the company about a possible job for her husband. Scheps and Englert decided that an Italian burrata master falling into their laps was fortuitous.

Marchitelli, in turn, was pleased with the company’s low-tech approach. “I like to use my hands,’’ he says. “When you have a machine, it’s not my product, it’s the machine’s.’’

He did make a few demands of his new employer. Says Scheps: “He insisted on the white boots and an espresso machine.’’