These cooks put their own spin on extra helping

There is nothing quite like the comfort of a home-cooked meal, especially for those who, for various reasons, can’t cook for themselves.

A gift of food — for new neighbors overcome by stacks of boxes, new parents coping with little sleep, an ill friend, a family in mourning — can be as simple as a basket of muffins or cookies, or as elaborate as a complete meal. The gesture of providing for others is rewarding. “It’s an expression of my caring,’’ says Amanda Celentano. For a friend whose daughter had surgery recently, the Marblehead resident brought grilled flank steak, vegetables, cookies, and wine. For another friend who was at a funeral all day, Celentano had a crock-pot filled with chili and a plate of corn muffins waiting when they returned home.

This sort of cooking needs to be widely appealing. If you know the family well enough to know their tastes, all the better. Celentano prefers easy dishes that “people seem to like,’’ she says. That might be roast chicken with potatoes or pork tenderloin with Dijon mustard and rosemary. She doesn’t make casseroles, she says, “because everybody else makes those.’’ She also alerts her recipients and asks when they want their drop-off. “I’m making you dinner,’’ she will say. “What night would you like it?’’ When she cooks for another family, she makes the same meal for her own family too.

People who are under stress usually prefer simple fare. Phyllis Kaplowitz, executive chef at Bakers’ Best Catering, suggests chicken soup, mac and cheese, roast chicken, baked goods, and casseroles. She often makes one-pan dishes, such as lasagna, shepherd’s pie, chicken pot pie, and chicken or eggplant Parmesan. “They might not eat [the food] that day, so it can be refrigerated or frozen,’’ she says. The same goes for her spinach, leek, and mushroom quiche, which makes a convenient dish for any meal. About a month ago, Kaplowitz brought new neighbors a dinner of lasagna, salad, and carrot cake whoopie pies. She gave the dish the lasagna was baked in as a housewarming gift.

Deliveries do not need to be homemade. “Not everyone has the time to cook,’’ says Kaplowitz, who helped create the Gift of Food program at Bakers’ Best, which offers seven meals that can be delivered.

Giving food is only half the equation for Gail Flynn. The Newton resident doesn’t just drop off a meal; she stays, cooks, and dines. “To me, it’s a portal to connect,’’ she says. For a friend who recently broke her arm, Flynn marinated chicken and cooked the dish at her home. She served it with twice-baked potatoes, sauteed snow peas, and a salad. For dessert, she brought mandelbrot, the twice-baked cookies that resemble biscotti, a recipe from her grandmother. She always prepares an entire menu. “I don’t want them to have to fill in the blanks.’’

A few years ago Flynn visited friends outside Massachusetts who were undergoing cancer treatments. She stayed, shopped, and prepared meals for a few days. “There’s something about putting energy and time into it,’’ says Flynn, an artist. “It’s like painting a picture rather than buying one.’’

For these women and others, bringing food to friends is how they lend a hand. “I may not be able to help out in other ways, says Celentano, “but I can always cook.’’ 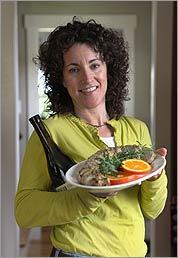 (Wendy Maeda/Globe Staff) Amanda Celentano shares easy dishes that "people seem to like."
Your comment is subject to the rules of our Posting Policy
This comment may appear on your public profile. Public Profile FAQ