A passionate believer in the grandeur of grains 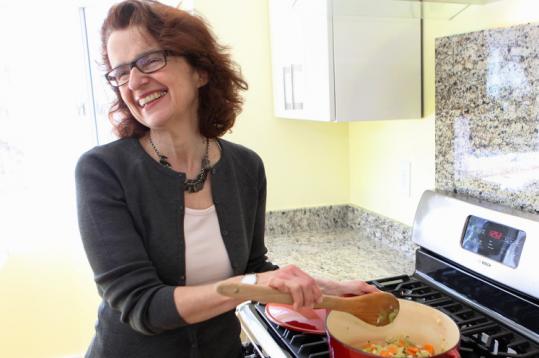 “Whole grains have really been on my table since I was born,’’ says Maria Speck, cooking in her Cambridge kitchen. (Wendy Maeda/Globe Staff)
By Aaron Kagan Globe Correspondent / May 4, 2011

CAMBRIDGE — Maria Speck considers millet comfort food. “Millet is truly an amazing grain, which is so underappreciated — and laughed at as bird food,’’ she says. “I’ve cooked it many times for people who would never eat millet if you told them, and they all loved it.’’ She might use the grain in saganaki, a one-pot Greek dish with shrimp, feta, and tomatoes, or add it to a sweet ricotta pudding.

The author of “Ancient Grains for Modern Meals’’ insists that whole grains are scrumptious and simple to prepare, rather than laborious, long their reputation. A grain is whole when it is minimally processed so only the inedible outer husk is removed; all remaining components are intact, including the germ and bran. Think of brown rice (whole) vs. white rice (processed). “Whole grains have really been on my table since I was born,’’ says Speck, who lives in Central Square with her husband, Alnoor Ebrahim. He teaches nonprofit leadership at the Harvard Business School. They have been here five years.

In her colorful, sunlit kitchen, she is cooking mussels with farro and white wine. “It’s a very lush meal and there’s a plumpness that both the grain and the mussels have,’’ says Speck, who was raised by a Greek mother and German father. She recalls her Greek grandmother hanging phyllo dough to dry on the back of the living room furniture. Her culinary style reflects a Greek enthusiasm for fresh herbs and a German precision, especially when it comes to baking bread.

Speck sometimes prepares large batches of farro ahead of time, storing individual portions in the fridge or freezer. She likes to make whole-wheat waffles with saffron; buttermilk cornmeal pancakes with cherry sauce; or fig muffins with a core of sweetened goat cheese. Other recipes include spelt-crust pizza with fennel, prosciutto, and apples, and lamb stew with wheat berries. One surprise is whole grains in desserts. She adds wheat berries to a fool, the classic creamy dessert, for a pleasant chewy texture. It is topped with figs soaked in orange liqueur.

“One grain that is so stunningly beautiful is Chinese black rice, which turns purple when you cook it,’’ she says. She uses it in a black rice pudding flavored with rose-water infused dates, combining ingredients from Asia and North Africa. The dessert was inspired by childhood summers in Turkey with her father, a Byzantine historian. “We’d be going from mosque to mosque and excavation to excavation, and food was the only distraction for us kids,’’ she says.

Some of Speck’s dishes call for precooking the grain, others for overnight soaking. There’s a list of grains, such as bulgur, that are best for quick meals. “Bulgur is the ancient fast food,’’ says Speck. Before it is dried, the wheat specks are steamed, shortening the cooking time to as little as 10 minutes.

The author offers a recipe for a whole grain bread that floats in a large pot when it has risen sufficiently, hence the name “floating sesame loaf.’’ She describes the technique with a German adjective: kinderleicht, meaning easy enough for a child. “They love it. They sit next to the pot to watch it come up.’’

Speck, who is a self-taught cook, teaches at the Cambridge School of Culinary Arts. She was a reporter and editor at the German news agency Deutsche Presse-Agentur for 10 years and came to the United States in 1993 as a Knight Fellow at Stanford University, where she met her husband. She still freelances for German publications, including Stern, writing on technology, society, health, and now food.

When she was working in Germany, she says, “I was a young typical journalist, eating frozen pizza, smoking cigarettes.’’ A friend brought over a dish she had made and said, “Try this.’’ It had wheat berries, the same grain she remembered eating as a little girl at a memorial service for her Greek grandfather. “This dish had bell peppers, spring onions, fresh cheese, a very simple marinade of olive oil, lemon juice, and fresh parsley.’’ It was a pivotal moment, says Speck. “It brought me into the kitchen.

“I feel very lucky because no one ever told me to eat [whole grains] because they’re good for us,’’ she says. “That’s important to me and a key message of the book. I want them to be appreciated for the amazing flavor, rich textures, and stunning colors they bring to our meals.’’