Ham for the holiday 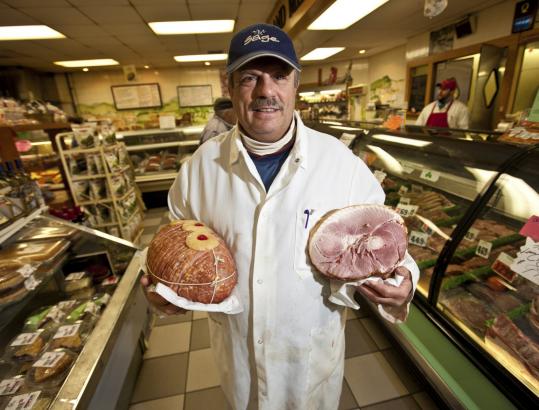 (Aram Boghosian for The Boston Globe)
By Glenn Yoder April 20, 2011

Q. How busy are you this time of year?

A. Easter is our biggest holiday. It’s lambs and hams. Everybody wants them. My boys will still stay until 2 or 3 in the morning cutting them and getting them ready. We don’t buy frozen hams ahead of time so we can defrost them. It’s all fresh. I don’t want to worry about someone having something questionable for their holiday.

Q. What exactly is a fresh ham?

A. When it’s slaughtered, within 10 days it comes to the store. It’s never been frozen. It’s fresh, it’s raw, it’s not cured, it’s not smoked, it hasn’t been processed. It’s just nature’s nature. Some people will say, “I want a fresh ham,’’ and we have to ask them because a lot of people don’t understand that’s a raw piece of meat. They think they’ll just warm it up. Cured ham has already been cooked. With fresh ham, you’re going to fully cook it.

Q. If I want a fully cooked ham, how is it labeled?

A. It’ll always tell you it’s fully cooked. You just put it in [the oven] for maybe 35 minutes and make a sauce with maple syrup, brown sugar, pineapple slices, whatever. With ham, what you want to look for is the percent of your water and salt. Stay away from a high percentage of water added because it just makes ham saltier.

Q. How are hams cured?

A. We make our ham, boneless budaball, and it’s not overly smoked. When you smoke it, it tends to dry it out. The more you smoke the meat, the more water you have to add to keep it moist. Our budaball is tender, juicy. It’s one of the favorites. It has a nice ham flavor and you just warm it up. It’s basically just a cured honey ham; it doesn’t have that hickory flavor. At supermarkets, you’ll see hams, but you have to be careful because you’re buying something for 99 cents, but it’s more bone than meat. Ours is a honey-cured ham and doesn’t have all the additives either.

Q. Is there a special machine that slices spiral-cut hams?

A. There is a machine that they do it with. We had one, but people were complaining that a lot of the meat was sticking to the bone, so we just decided to do it on the slicer, re-tie it back together, and then they put the sauce right on top of the meat.

Q. Do you get any strange special requests?

A. A lot of people want the ham bones out then retied because it makes it easier to carve. We usually discourage it because it’s a lot of work. We’ll do it, but we like them to pick it up three to four days before the holiday, so they can leave it in the refrigerator and not worry about it. We can do anything they want, except make it walk again. That’s just the way we are. But since the Food Channel came on, I can’t tell you how many people want to do weird, weird stuff. We can do it, but some of the things from the cooking station are a little off the wall.

Q. Do people complain about the price of going to a meat market over a chain grocery store?

A. It might cost a little more, but always go with the better product because it’s a special occasion. We’re feeding family and friends. Why nickel and dime it? Get something that’s good. It’s a holiday and you should be eating good. People always remember how good it is long after they complain about the price.

Interview was condensed and edited. Glenn Yoder can be reached at gyoder@boston.com.