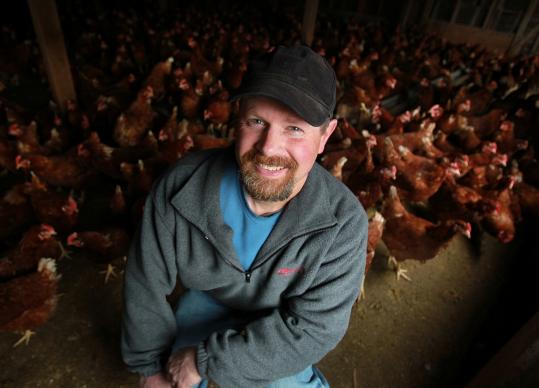 Q. Do you notice an increase in egg demand this time of year because of Passover and Easter?

Q. Is this the busiest time of the year for eggs?

A. For egg sales, yeah. Christmas is second probably. A lot of people buy eggs in the summer and the farm stands keep sales strong for the next six months.

A. In New England, we wouldn’t be able to sell a white egg. We used to buy them from a wholesaler but people complained and we found the eggs were inferior. We didn’t want to be blamed for the quality. We pull light eggs, which are a lighter shade of brown. Usually an older bird lays a little lighter colored egg, and we sell those for people to dye.

Q. How fresh are the eggs when they get to market?

A. They’re there within 24 hours; it’s usually yesterday’s egg. We pull the eggs twice a day and sometimes the wholesale people call later and order eggs and they’ll say, “Can I get something this afternoon?’’ We have to remind them that the egg is still in the chicken.

Q. Do you notice a difference in the taste of eggs when the weather turns warm?

A. Not taste, but they become a little runnier because the chickens drink more water. But as far as taste, no. We don’t switch feeds. Some farms will switch and that will affect taste, but we use the same one all along.

Q. How would you describe the color of the yolks?

A. Vibrant yellow to orange. It depends — the older the chicken, the less vibrant it’ll be. Jumbo are less vibrant, but the best yolks are pullets. It’s the best-tasting egg, but very small. The flavor is superb, because the chicken is young and everything is working right. The shell is hard, the yolk is firm and very yellow, but they’re tiny so nobody wants the egg. We do specials because we get 900 birds all laying pullets at the same time. Some people look for them, though.

Q. Does the name Chip-in come from everyone pitching in to help out?

A. It’s originally more from everyone in the family chipping in to buy the farm. My grandmother worked at the time making hand-grenade parts, my father had money from after-school jobs that he pitched in, and my grandfather had a milk route. So they pooled their money together.

A. As long as you can walk, you can work, so we were always working. I don’t know how much work we were doing, but we were always out there. You grow up seeing your father work seven days a week and you don’t question it. Now you get a day off sometimes and you say, “Gee, that’s different.’’ But you don’t really get days off.

Q. What words of wisdom did your father pass along?

A. You had to get along. He said it’s not good to argue. My father and grandfather ran it for generations and got along, and my brother and I get along and don’t argue.

Q. Will you be passing the farm on to your children?

A. If they want to do it. I have two boys and my brother has a daughter. My oldest boy is a real hard worker, he’ll be 9, but it depends on if he wants to do it. It can be a miserable job if you don’t like it, so you pretty much have to like it.

Interview was condensed and edited. Glenn Yoder can be reached at gyoder@boston.com.