THIS STORY HAS BEEN FORMATTED FOR EASY PRINTING
Food Issue

A narrow patch of green near Blue Hill Avenue was hailed a few years back as a model of reclamation, a new rural escape in a part of Dorchester dense with multifamilies. Volunteers cleaned, tilled, and dug their fingers in, transforming a sketchy dumping ground into an Eden of vegetables and fruit. They called it the Generations of Hope Community Garden. The hope waned, though, as some gardeners stopped coming. Drug dealers and other bad actors filled the vacuum. But vestiges of more verdant days lingered – a red wheelbarrow, for example, leaned against a chain-link fence when I visited recently. And this spring, if an urban apple evangelist named Lisa Gross can put her vision into practice, the garden will be in the first ranks of a quiet revolution. A revolution of civic fruit.

Gross is a 28-year-old artist and graduate student at the School of the Museum of Fine Arts/Tufts. Her medium, for the moment, is apples as she launches an ambitious attempt to redefine the relationships people have with their food, with open space, and with others who live and work on their streets. She’s calling it the Boston Tree Party. Her aim is to enlist an army of growers to plant 200 apple trees in civic spaces in Greater Boston over the coming months and to nurture them for years. Not bad apples – you won’t see those waxy orbs of tastelessness we call Red Delicious. She wants heirloom varieties like Boston’s own Roxbury Russet, which dates from the first half of the 17th century.

The experiment starts next weekend with a ceremonial planting of two trees on the Rose Fitzgerald Kennedy Greenway, steps from where the dunked British tea in 1773. “The Boston Tea Party started a movement for our country’s independence,” Gross says. “Let’s start a movement for civic fruit.’’ She says this playfully but earnestly, careful not to really liken the project to Lexington and Concord while still believing strongly in her cause.

Part Johnny Appleseed and part Jane Jacobs, the 1960s activist and champion of New York neighborhoods, Gross conceived the project after reading Robert D. Putnam’s groundbreaking 2000 book Bowling Alone, which chronicles Americans’ social isolation. “People are hungry to connect across differences, but they don’t know how,” she says. So Gross is offering them apples as catalysts. Why apples? They connote health, American-ness, history. Plus, she believes, they evoke a certain populism. Not like arugula, she says, “or pears.”

Churches, synagogues, schools, assisted living centers, community organizations, garden clubs, and other such groups – many of which rarely, if ever, have occasion to interact – are pairing up and preparing to plant, care for, and ultimately harvest from two trees of different varieties, to be planted in close proximity. (Nearly all apple trees require cross-pollination to seed.) Sign-up is taking place through April 15; each delegation pays $300, if it can afford the full fare, and gets in return two one-year-old semidwarf trees that will grow from 10 to 15 feet tall, a helping of compost and mulch, and technical guidance. Together, the thinking goes, the trees will form a new decentralized urban orchard, with the first decent harvest expected in four years.

For Gross, herself a Korean-Jewish hybrid, the metaphor of cross-pollination is a powerful one. She calls her nonprofit organization Hybrid Vigor Projects, after the genetic principle that crossbreeding can produce stronger offspring. The Boston Tree Party is the first initiative of the group, which aims to create “socially engaged participatory public projects in service of positive social change.” At the Generations of Hope Garden, grandparents who live in the affordable housing development across Nightingale Street are joining forces with teens and young adults in a Roxbury skills program about 2 miles away called YouthBuild Boston. David Price, executive director of Nuestra Comunidad, the nonprofit that owns the garden and housing complex, believes that the apple tree project, along with a larger effort to rebuild and sustain the garden, will help knit the neighborhood together, put more eyes on the street to discourage criminals, and provide teens a chance to connect with seniors. “We’re going to make sure we have an apple pie contest,” he says.

In spreading her apple gospel, Gross inherits a rich Boston tradition of urban gardening and civic fruit. In the 1970s, with the city riven by racial strife, gardening and farming enthusiasts, including activist and state lawmaker Melvin H. King, saw green space as salve, and set out to spread it. One offshoot was the Massachusetts Fruition Program, an initiative for which King won approval from the Legislature to provide state funds to plant fruit and nut trees and berry vines on public land. King, now 82, remembers that one of his inspirations was a gift from his neighbor of some blackberry bushes. “I had planted them in my yard in the South End. I said, ‘We should try to do this for a much broader thing,’ ” he recalls. In the 1990s, the organization EarthWorks picked up the mantle, planting apples, plums, gooseberries, and much more on public land across the city; the group dissolved last year, and two nonprofits, Boston Natural Areas Network and Boston Cares, will work with volunteers to care for the orchards.

Today, urban agriculture, owing to both its symbolic power and its harvests, is more important than ever. A childhood obesity epidemic underscores the disconnect between our dinner tables and the soil. The fuel required to transport blueberries and lettuce from South America and California contributes to global warming. Backyards, parks, community gardens, riverbanks, and rooftops have shown the bounty they are capable of, blurring the line between city and country.

The Boston Tree Party, as Gross makes clear, is not designed to flood poor families’ tables with apples. It won’t, on its own, make a dent in obesity rates or radically alter city dwellers’ access to fresh food. She hopes, rather, it will get disparate communities of people interested in these concerns, in one another, and in bringing more green to the grid. She has studied her predecessors’ work – and their missteps – and believes the Boston Tree Party will succeed if each delegation truly takes responsibility for its trees.

The thing about public space is that nearly everyone believes in it – I’d argue the vast majority of Bostonians want to live in a city where tables and chairs can be safely left out on the Greenway. But it’s not that simple. If you’re like me, you marvel every time a duckling statue is stolen from the Public Garden. I mean, who does that? I asked Gross whether she was worried her apple project could be damaged or destroyed by just one jerk, only I used another word for jerk. “But should we not do it because of the one [expletive]?” she said. “I think not.”

Gross, who lives in Inman Square in Cambridge, belongs to a class of young urban homesteaders who value making and growing their own stuff, with one hand in the dirt and the other cradling an iPhone. But she is not dogmatic about it. “Everything has its time and place,” she says, “even a bag of Cheetos.” For Gross, the Boston Tree Party is more than an experiment in civics; it is her thesis project at Tufts. I asked her whether people could too easily write it off as the hobby du jour of a yuppie artist. She said that hasn’t been a big issue, saying that people of many different backgrounds have embraced the vision. “The truth is,” she adds, “you enter where you enter.” Gross, who is on track to receive her MFA this spring, says she is committed to keeping the project going for at least five years. If she can attract enough funding, she hopes to run her nonprofit as a job after graduating.

At this point, it’s easy for participants in the Boston Tree Party to be excited about all this – the kickoff next weekend, the many tree plantings this spring, a Boston Tree Party Convention this fall. Gross’s biggest challenge is to keep everyone interested and engaged over the next several years, as they wait for the trees to bear fruit. “Cultivating fruit trees takes patience, and it takes time,” says Valerie Burns, president of the Boston Natural Areas Network. “We’ll all see what the initial excitement actually leads to.”

That long-term commitment is what appeals to Kenya Pavon, a director of the Gately Youth Center in North Cambridge, which is pairing with the organization City Sprouts and the Cambridge Garden Club to plant two trees at the Peabody School, a public grade school on Rindge Avenue. “I like that it’s not a one-year project – it’s not just going to be instant gratification,” Pavon says, showing off the small courtyard where children and older green thumbs will work together. And, she says, it will teach the young growers a deceptively simple lesson about apples. “They don’t,” she says, “just come from nowhere.”

Scott Helman is a Globe Magazine staff writer. E-mail him at shelman@globe.com. 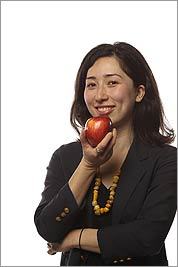