THIS STORY HAS BEEN FORMATTED FOR EASY PRINTING
Cooking

Ideas for delicious meals made with ground beef.

For many cooks, a package of ground beef usually winds up either as hamburgers or sloppy Joes. There’s nothing wrong with those dishes, of course, but there are many other possibilities. For instance, how about a quick version of the classic French dish hachis Parmentier? Think shepherd’s pie, but better: a casserole of savory beef (traditionally chopped up from a leftover roast or stew) topped with mashed potatoes and toasted gruyere. Popular in several Latin American and Caribbean countries, picadillo is another great option for ground beef (or pork). Simmered with tomatoes and spices, highlighted with sweet raisins and briny olives, picadillo can be served as an entree – with beans and warm tortillas or rice on the side – or used as a filling for tacos, chiles rellenos, or empanadas.

6 to 8 medium-large russet potatoes (about 3 pounds), peeled and cut into 1-inch chunks, rinsed in 2 changes of water

In a very large skillet over medium-high heat, heat the oil until shimmering. Add the onion, bay leaf, and 1/2 teaspoon salt, and cook, stirring frequently, until onion softens, about 4 minutes. Add the meat and cook until no longer pink, about 10 minutes; spoon off fat, if desired. Add the garlic, thyme, and tomato paste, and cook, stirring constantly, until fragrant, about 1 minute. Adjust the heat to medium, add the flour, and cook, stirring constantly, for 1½ minutes. Add the broth and 3/4 teaspoon salt, adjust the heat to high, and bring to a simmer, using a wooden spoon to scrape bottom of skillet to loosen and dissolve the fond, about 1 minute. Adjust the heat to medium-low and cook, stirring and scraping occasionally, until thickened but still saucy, about 15 minutes. Set skillet aside off heat to cool slightly; remove bay leaf, add most of the parsley, and stir to mix. Taste and adjust seasoning with salt, if necessary, and pepper to taste. Scrape the meat mixture into a broiler-safe 2-quart casserole dish, spread evenly, and set aside.

Meanwhile, place the potatoes in a steaming basket. Fill a large pot with enough water to reach just to the bottom of the basket and bring to a boil over high heat. Set the basket in the pot, reduce the heat to medium-high, and steam the potatoes until very tender, about 20 minutes. Remove the basket and pour the water out of the pot.

Meanwhile, adjust oven rack to upper-middle position and heat oven to 450 degrees. Spread the potatoes evenly over the meat filling, making sure they reach the edges of the dish, and sprinkle with the gruyere. Place the dish on a baking sheet and bake until the filling is heated through and the potatoes are puffed slightly, about 20 minutes. Turn on the broiler and broil until top is golden brown, about 7 minutes. Sprinkle with remaining parsley and serve.
Picadillo, mexican style

In a very large skillet over medium-high heat, heat the oil until shimmering. Add the onion, bay leaf, and ½ teaspoon salt and cook, stirring frequently, until onion softens, about 4 minutes. Add the meat and cook until no longer pink, about 7 minutes; spoon off fat, if desired. Add the serrano peppers, garlic, cumin, cinnamon, cloves, oregano, thyme, and tomato paste, and cook, stirring constantly, until fragrant, about 1½ minutes. Add the broth, tomatoes, and potato, stir to mix, adjust the heat to high, and bring to a strong simmer. Adjust the heat to medium-low, cover, and cook, stirring and scraping bottom of skillet occasionally, for 15 minutes.

Add the raisins, olives and brine, 3/4 teaspoon salt, and black pepper to taste, replace cover, and continue cooking, stirring occasionally, until potato is tender, about 20 minutes. Remove the cover, add the vinegar, and continue to simmer, stirring occasionally, until thickened but still saucy, 3 to 8 minutes longer. Remove the bay leaf. Taste and adjust seasoning with salt and black pepper, if necessary. Stir in most of the scallions and serve, sprinkling each portion with remaining scallions and the almonds.
VARIATION

If you wish, garnish this with chopped hard-cooked egg and serve with white rice.

1) Substitute 1 large cubanelle pepper, cored, seeded, and chopped for the serrano chilies, adding it to the skillet with the onion and bay leaf.

2) Increase the cumin to 1½ teaspoons and omit the cinnamon, cloves, oregano, thyme, cider vinegar, and almonds.

3) Add 1½ tablespoons Worcestershire sauce along with the raisins and olives.

Send comments or suggestions to Adam Ried at cooking@globe.com. 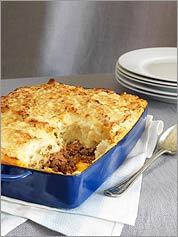 (Photograph by Jim Scherer; Styling by Catrine Kelty) WORTH A TOAST Cheese and mashed potatoes brown on top of this hachis Parmentier.
Read more from this issue.
Follow Globe Mag on Twitter

For the Hachis Parmentier, you want to be careful not to mix the meat filling into the mashed-potato topping as you apply it, which can be tricky because the filling is saucy. Here’s how I put on the potatoes so as to keep the layers distinct: Dollop scoops of mashed potato all the way around the perimeter of the dish, finishing with a few scoops in the center. Then use a flexible spatula to carefully spread the dollops into an even layer.