Bigger — and better — than the average beer 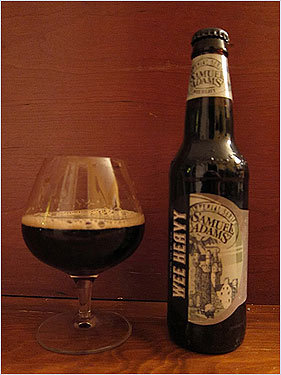 You’re going to have to put on your big-boy kilt before you open a bottle of Samuel Adams Wee Heavy.

The newest entry in the Boston Beer Co.’s imperial series (which, incidentally, has given its labels a makeover with an inspired fresh design), Wee Heavy is a turbocharged version of Samuel Adams Scotch Ale. An incredibly intense, dark beer, Wee Heavy — that’s also the name of the actual style — may be Sam Adams’ best “big beer’’ yet.

“Big beers’’ — those with an alcohol-by-volume content of 10 percent or more — are all the rage right now. They usually cost more, but you drink them more slowly, and you can’t — or shouldn’t — drink as many, so in the long run you save money. (How’s that for an argument for drinking higher-alcohol beverages? It’s good for your wallet!)

It’s certainly one of the boldest beers to come out of the Jamaica Plain brewery. A huge blast of roasted, smoky malt greets you when you sniff this beer. Appearing between dark brown and ruby red with an off-white head, a glass of Wee Heavy looks a lot like a Dr. Pepper. (The similarities end there.) Wee Heavy even tastes like smoke, with a nasal-clearing booziness, a sweet start, and a pleasantly bitter aftertaste. Long after the swallow, the smokiness lingers on the taste buds.

Smuttynose Wheat Wine Ale A wheatwine ale is basically a barleywine made with wheat. In the case of Smuttynose Brewing Co.’s wheatwine ale, it’s made with 50 percent wheat, 45 percent barley, and 5 percent cane sugar. This one also has a lot of hops — measuring 70 International Bitterness Units, putting it in the range of an imperial IPA. No surprise, since it was aged for five weeks on dry hops and oak.

The Portsmouth, N.H., brewery has thrown down the goblet with this wheatwine, which rivals Stone Brewing Co.’s stellar American barleywine, Old Guardian. In fact, it’s pretty much impossible to detect the wheat in the Smuttynose Wheat Wine — there’s none of that trademark wheat tang, and that’s surely because the hops overwhelm it.

Smelling of alcohol and dark fruit, the beer pours dark amber with no head, just a few bubbles around the circumference. Peppery spice, caramel, and bitter hops come through in the first sip — and at nearly 12 percent alcohol, this beer demands to be sipped slowly. The body is a bit thinner than a barleywine, but anyone who loves a strong, well-hopped ale will enjoy this one immensely.

Double Old Thumper Old Thumper Extra Special Ale was created in 1979 at England’s famed Ringwood Brewery. Alan Pugsley trained at Ringwood, and when he moved to the United States he brought Old Thumper with him. When Pugsley opened Shipyard Brewing Co. in Portland, Maine, in 1994, one of the first beers he brewed was Old Thumper. It also was — and remains — one of Shipyard’s best.

Seventeen years later, Pugsley has upped the ante, creating a bigger, bolder version of the English bitter. With twice the hops and strength, Double Old Thumper is an altogether different beer. It just smells bitter, with an aroma that brings to mind butterscotch and black licorice. Copper to chestnut brown with a one-inch head of foamy bubbles, it also looks enticing. And it is, with the buttery character of that distinctive Ringwood yeast. Double Old Thumper does not hide its alcohol, though. Nor would you want it to.