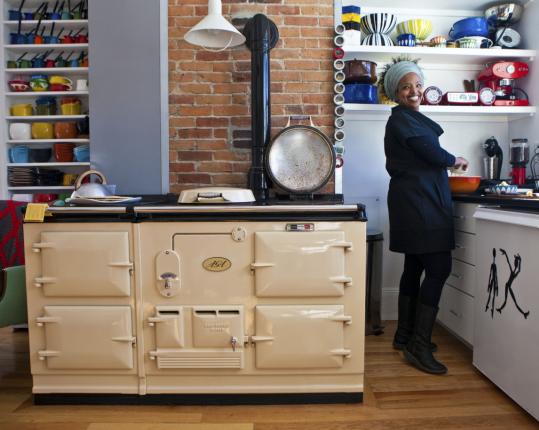 Nimco Mahamud-Hassan’s Aga range has four ovens, two regular burners, and a low-heat burner. She likes to cook dishes from her native Somalia at her home in Somerville. (Aram Boghosian for The Boston Globe)
By Andrea Pyenson Globe Correspondent / March 2, 2011

SOMERVILLE — Directly opposite the front door, through a gracious entrance hall and a study with neatly stacked toys, a cream-colored Aga cooker is set against the brick chimney. It’s as if the enamel-covered cast-iron creation has a magnetic pull, beckoning visitors into the room. Some may simply be drawn by the heat it radiates throughout the kitchen in the home of Nimco Mahamud-Hassan, Alexander De Waal, and their 4-year-old son.

A native of Somalia, Mahamud-Hassan says she has wanted an Aga since she was 14. She first saw the iconic British oven in Alexandria, Egypt, where she lived for three years as an adolescent. She lived in England for 18 years, before she moved here with her husband in 2004. The stove in this kitchen was a gift from her British mother-in-law when the couple renovated three years ago.

Aga ranges, which come in a variety of sizes and configurations, are priced from $5,480 to $18,000. The model in this kitchen is gas-fueled, with four ovens, two regular burners, and a low-heat burner — or, in Aga parlance, two hotplates and a warming plate. The pilot is always on, and there are no on/off switches or temperature settings. The oven and burners are ready to go, all the time. Each oven is a different size and temperature: for roasting, baking, simmering, and warming. Similarly, the two burners are different temperatures, one for boiling, the other for simmering. Mahamud-Hassan says it took her “about two weeks’’ to adjust to cooking on her new stove.

An advantage of this range in the cold weather months is that it heats the entire kitchen. “There are moments in August when it’s not so lovable,’’ she says, “but it makes up for it in the winter.’’

Mahamud-Hassan is writing a book about Sudan, but considers cooking a serious hobby and spends a lot of time at her Aga preparing meals for her family and a steady stream of international visitors. “I cook a combination of every little thing I ever had,’’ she says. “My comfort food is always, always Somali food.’’ This includes stews with chicken or fish, cumin, coriander, garlic — “anything but pork,’’ she says; and rice and potatoes, a variety of pancakes, and lots of clear soups. She also likes Thai and Ethiopian food.

On a recent sunny morning, she treats two visitors to loxoox (pronounced lu’ huh), which are Somali pancakes. She pours the yeasty batter directly onto one of the hotplates — no pan necessary — and spreads it evenly with a spatula. She stacks the cakes on the warming plate as she works through the batter. In Somalia, these would be eaten with butter and brown sugar, she explains, but offers them today with sliced bananas, a dusting of cinnamon, and maple syrup.

A little bit of New England seeps into this cultural blend.