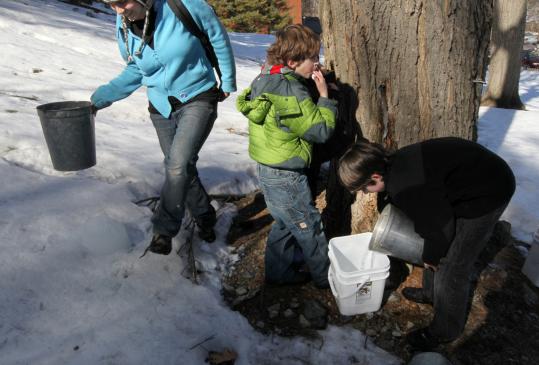 There are no picturesque cabins tucked into snowy woods on the streets of Somerville and Medford. But there is sap from maples. And urban trees can yield sweet results. The Somerville Maple Syrup Project taps trees in both cities and will turn the sap into syrup at its annual boil down this weekend.

“Doing urban agriculture is a whole different beast from doing rural agriculture,’’ says Groundwork Somerville gardens coordinator Tai Dinnan, who heads the project. The effort is coordinated by her group, a nonprofit organization that takes a creative approach to community development. Its members want to raise awareness about urban agriculture and healthy eating.

The effort isn’t without obstacles. “Things that are easy to do in a rural area, like building a wood fire, are illegal to do in a city.’’ says Dinnan. But you need fire to boil syrup, so the group will use a wood stove, built by a Somerville High School class. Sap comes only from healthy trees not directly exposed to road salt or car pollution. Residents with sugar maples in their yards are invited to donate the use of their trees. Tufts University students volunteer for the project, and several trees on the campus are tapped.

Project members went into second-grade classrooms to talk about syrup, beginning with where it comes from. When the students reply, their answers can be surprising. “The kids say, ‘Demoulas!’ ‘Star Market!’ ’’ says Louise Mercer, a teacher at the Dr. Albert F. Argenziano School at Lincoln Park. “[Volunteers] go through a series of lessons with the children, even mapping a weather chart, so it touches curriculum across the boards. The Tufts kids a long time ago made up a song that we still sing, and the kids get to play the parts — whether they’re the heartwood or the sapwood.’’

Over the years, Mercer has taken the project’s message to heart. “Kids in this generation, especially, think that things are packaged for them, and [the project] gives them a better understanding of their own surroundings, their own environment.’’

Katie Gradowski, one of the volunteers, works for Parts and Crafts, another Somerville organization, and travels the city on a bike cart, collecting gallons of maple sap. “We had a tree tapping event last Saturday, and there were probably 50 people that came out to tap the trees for the first time,’’ she says. “It was kind of this simple and magical thing.’’

The boil down typically yields only a few gallons of syrup, which is given to volunteers and sold at the Groundwork Somerville booth at the Union Square farmers’ market. The impact of the project is less easily measured. “Our goal is to produce a food item. But really the project is more about changing people’s perspectives,’’ says Dinnan. “It gets a lot of people to think about urban trees in a different way.’’