Boston cooks up a strategy to win convention business 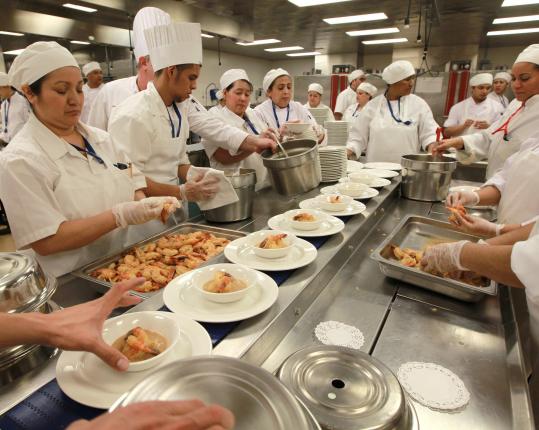 Food cooked for large groups — large as in thousands — is often held to a lower standard than food served almost anywhere else. At weddings, trade show lunches, and most corporate events, you pray the meal will be edible. What you get is woefully overcooked chicken, salads dressed hours ago, desserts with enough gelatin to make them bounce.

Amid fierce national competition for conventions, Boston’s biggest kitchens are now striving against the odds to also be the best. The Boston Convention and Exhibition Center at the waterfront, known as the BCEC, is trying to lure visitors here with a reputation for good food, locally grown when possible, locally sourced year round. And they’re not just preparing meals for a few hundred diners. They routinely cook for 2,000 or more.

When the BCEC invited the Globe to help cook one of these huge meals, the opportunity was irresistible. Could a kitchen this size really make decent dishes? We were prepared for the worst and pleasantly surprised by what we found.

The BCEC is the largest building in New England, and the kitchen is appropriately gigantic. With nearly 50 ovens, dozens of walk-in refrigerators, and many 50-gallon pots (they’re large enough so you can climb inside and hide there), the massive space requires conveyor belts to move food, and scores of chefs, cooks, kitchen staff, and servers.

Christopher Pulling, who has been in the job since last summer, is executive chef for BCEC and Hynes Veterans Memorial Convention Center. Pulling is charged with revamping the food. Among other mandates, his contract stipulates that he use 50 percent supplies and locally produced vegetables, meats, and dairy for convention meals. The food at the BCEC has not always been good. One year ago, the Massachusetts Convention Center Authority, which manages both facilities, dismissed Aramark, the company that previously ran the kitchen. MCCA executive director James Rooney says, “We had to move beyond the so-called ‘rubber chicken’ problem in convention dining.’’ Rooney did not believe Aramark was up to the task. “They are better known for making the food in universities and’’ — he noted — “prisons.’’

Even while Aramark was still serving the two convention centers, Boston did manage ninth place in the top 10 city rankings in the magazine Tradeshow Week. These lists are enormously important in attracting business. Among the factors: market share, the city itself, climate, airline access, and the convention centers’ capacities and services — including dining. Rooney says, “Culinary experience can be a strategic factor in achieving a top-5 status.’’ So they set that as their goal.

But the MCCA isn’t in the restaurant business. Pulling’s employer, Levy Restaurants, is. They operate 10 establishments in Chicago, where they are based, and run kitchens at another 74 stadiums and other centers.

Changing the quality of a kitchen this large is a bit like turning the Queen Mary. But the BCEC is managing to do it, and quickly. “The food this year is much better than it has been in the past 12 years,’’ says Beth McNeill, who organizes Big Brothers Big Sisters of Massachusetts Bay’s annual “Big Night’’ fund-raiser and dinner for 900, held recently at the waterfront facility.

Food presentation details are also under new scrutiny. For example, “chafing dishes’’ — those suspended metal pans heated by cans of Sterno — were banned because they have an institutional look and can dry out food. Classy (and expensive) paella pans on custom risers are used instead. As for using local ingredients, says Pulling, “We would want to do this anyway.’’ When visitors come to this city, they want to dine on local fish and produce. Pulling gets fresher supplies, and they cost less to ship.

When I arrive at the 2,000-guest financial industry dinner, attendees in formal attire are munching drip-proof hors d’oeuvres in the reception hall. Dinner, served in the main ballroom, is in less than an hour. I expect (well, maybe, hope for) a raucous free-for-all while pots burn and tempers flare a la Gordon Ramsay on “Hell’s Kitchen.’’ In fact, Pulling is preternaturally calm, and operation of the kitchen is almost military in its precision.

“He’s a great leader, creative, and direct,’’ says culinary supervisor Mark Conde. “You never see the chef lose it.’’ Theatrics in the kitchen may make good television, but here in real life, management skills are more of an asset. This summer, Conde himself was fodder on an episode of the Food Network’s “24 Hour Restaurant Battle,’’ a fact his more circumspect superiors in the BCEC kitchen seem to consider unseemly.

Cooking tasks are carefully planned and broken down into a large, choreographed sequence. But it’s more atelier than assembly line. And it takes talent to do each task well. I should know — I didn’t make the cut. The BCEC arranged for me, a reasonably skilled home cook, to help in the kitchen during the final stages. Dressed in chef’s whites, I join a team of 16 to plate surf and turf, which includes both haddock and short ribs. Portioning and precisely arranging many hot elements on plates moving along a conveyor belt in front of me takes concentration, speed, and fortitude. I last about 15 minutes (the last 10 out of their generosity; I should have been fired at 5).

In order to feed, say, 2,000 guests, 15 cooks will work for up to two days to prepare enough food so this group of 16 can assemble some 6,200 separate plates over seven hours — first the microgreens salad appetizer with walnuts and cranberries, then surf and turf, then a complicated lime mousse dessert made in individual martini glasses, garnished with creme Chantilly, shaved coconut, and white chocolate. The conveyor belt takes those plates to racks next to a small army of servers, who wait to dispatch them to diners.

While others continue working, I sit in a quiet corner with a fine glass of cabernet and one of the plates I arranged: baked haddock with a Parmesan crust and a colorful bit of tomato fondue placed up against a single, perfectly cooked blade steak short rib. Vibrant color surrounds the main attractions on the plate, which is garnished with the slender green beans, haricots verts, a splash of corn, and shaped mounds of merlot mashed potatoes (pleasantly rose-colored, with a subtle taste). I could be dining in a well-known restaurant.

Staff who happen by all stop with concern: “Is everything OK, chef?’’ I am still in full whites and the tall toque worn by the respected senior staff. The interaction illustrates the gravity that the title carries in a kitchen this large. “The food is excellent. And I’m not really a chef,’’ I reply, a bit embarrassed. I remove the hat.

Each event caters to guests who might appear and announce that they are vegetarian, gluten-free, vegan, kosher, halal, or allergic to something. These plates often require entirely separate preparation. “Sometimes diners change their minds or make a late request. We need to be able to react quickly,’’ explains Pulling.

Consideration doesn’t stop there. The kitchen donates unserved food to various non-profits who provide meals for the homeless. All waste is composted or recycled. Groups want to say that their gatherings are socially responsible. And, in a bit of zeal, kosher vending machines have been installed in the building for observant noshers. It’s a bit of good citizenship and a lot of good marketing.

When a kitchen is doing everything so right, you have to wonder what it’s really like behind the scenes. David Vaz, a cook here for seven years, is a burly, young, heavily-tattooed Cape Verdean. Vaz went to South Boston High School and has the accent to prove it. “I love being in the kitchen here,’’ he says. “I’m learning a lot from the chefs. And the pay is pretty great actually.’’ At staff meals, members take turns making their ethnic specialties — practicing cooking in quantity. With what he learns, Vaz looks forward to opening his own restaurant someday.

As the new kitchen approaches its first anniversary, there are early signs of its success. In 2010, the MCCA won 85 advance convention bookings. That’s the second highest ever for Boston, and a big improvement over 2009 (65 bookings).

New England’s climate may not charm everyone. But a new motto, a hard sell years ago, is now not only true, but, apparently, more widely believed: Come to Boston — for the food.

‘I LOVE BEING IN THE KITCHEN HERE.’
DAVID VAZ, BCEC COOK