Some trend-spotters have declared the cupcake fad over, but in Boston the confection is still growing strong 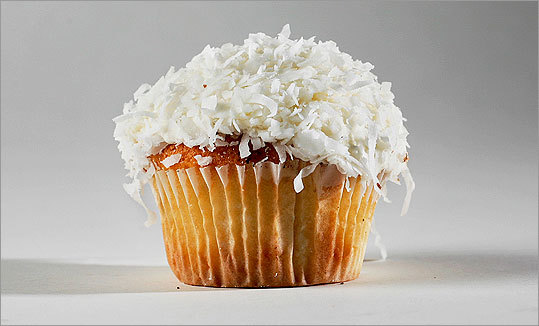 In the fad graveyard, between the tombstone for Tamagotchi and the plot for Friendster, should sit a cupcake-filled coffin. The frosting-covered grave marker would read something like: “Cupcake fad: Born July 9, 2000, on ‘Sex and the City.’ Died Aug. 20, 2006, during columnist Joel Stein’s anti-cupcake rant in Time magazine.’’

But unlike other fads, cupcakes refuse to bow out quietly. Nearly every time another snippy blogger, sassy food columnist, or food trend analyst declares that the cupcake trend has left the building, someone opens another cupcake boutique, or, Magnolia Bakery, responsible for igniting the cupcake craze, exhumes the pastry from its sugary grave by announcing a new store opening in Dubai.

Nowhere are the nine lives of cupcakes more evident than in Boston. Not only has the city brazenly ignored the news that the cupcake fad is over, but Boston is still fervently embracing cupcakes like a rebounding Carrie Bradshaw on a sugar bender circa 2002. Since the arrival of the area’s first cupcake-only bakery in 2007, we’ve witnessed a steady parade. The city’s latest cupcakerie, opened at the end of 2010, is owned by our very own superstar chef Todd English.

But that’s not the end of it. This spring, a cupcake truck will start traversing neighborhoods in need of a frosted fix. In addition, the Beverly Hills-based Sprinkles Cupcakes is looking for Newbury Street real estate with plans to open a shop this fall. On its heels, a spokeswoman for Magnolia confirms that the New York bakery is looking to open a Boston location in 2012.

What in the name of is going on here?

“I think Boston is late to the trend,’’ says Joanne Chang, owner of Flour Bakery, which sells a full line of pastry, including cupcakes. “It’s only been here a couple of years, and it takes a while for it to cycle through and phase out. Frankly I’m surprised it’s been such a strong trend. But it makes sense. People like sweets, and they can justify a cupcake as a small treat that seems less decadent than a slice of cake.’’

Sara Ross, owner of Kickass Cupcakes in Somerville, can claim the title of Boston’s original cupcake queen. Her shop was the first cupcake-only bakery to open here in September 2007. When she came to Boston from Santa Monica, Calif., in 2003, five cupcake shops were already battling for sweet supremacy in her hometown.

“When I got to Boston, I was absolutely amazed that there were no cupcake bakeries here,’’ she says. “Now there are plenty, but I don’t think we’ve reached a cupcake saturation point yet. Look how many cupcake places there are in New York and Los Angeles.’’

Despite the fact that there are now six cupcake-exclusive bakeries in the Boston area and countless bakeries that offer cupcakes on their menus, Ross still sees a demand for more, which is why Kickass will launch a cupcake truck this spring. The idea is to sell $3 cupcakes at events around town and to take the truck on day trips to towns such as Amherst or Portsmouth, N.H.

English, who opened Isabelle’s Curly Cakes with his daughter in December, said early in the cupcake craze he anticipated that the trend would fade quickly. Now he’s banking on the continued popularity of the confection.

“I kept thinking, ‘It’s not going to be here for long. It’s just a phase,’ ’’ he says. “But it seems like it’s here to stay. It’s wild. I had no idea what cupcakes do to people. It’s the craziest psychological reaction. People walk into the store, they see the cupcakes, and it doesn’t matter what the person’s age is, they get a smile on their face. It’s like they just entered Willy Wonka’s chocolate factory.’’

But not everyone has a grin on his or her face when the conversation turns to cupcakes. Andrew Freeman & Co., a hospitality and lifestyle consulting firm in San Francisco, is playing “Taps’’ for the cupcake and declaring that pies are the new king of the dessert cart.

“A lot of people are just tired of cupcakes,’’ says Leith Steel, an account manager at the firm. “It’s surprising that they’re still popular, because we’ve seen a lot of things that didn’t work too well, like savory cupcakes. At some point the line got crossed and it went too far. It became too big of a trend, and you wound up with too many places. But that’s going to start fading, and quickly.’’

(Earlier this month, the restaurant website Allmenus.com declared that whoopie pies are the treat to eat in 2011.)

Candace Nelson, the owner of Sprinkles and a judge on the Food Network’s “Cupcake Wars,’’ has heard these predictions before — many times. People told Nelson she was crazy when she opened her first cupcake-only boutique in 2005. At the time, the nation shunned carbohydrates thanks to the Atkins diet, and Nelson was told her cupcakes were a losing proposition. She can now thumb her nose at those naysayers. She recently opened her eighth bakery in La Jolla, Calif., with plans for Boston this fall.

“I can certainly understand that the media is tiring of writing about cupcakes, but I don’t believe that customers are tired of eating them,’’ Nelson says. “ ‘Cupcake Wars’ was just picked up for a third season, and we are seeing bakers on the show from all over the country. This is not something that is disappearing.’’

Regardless of whether or not the fad is fading, cupcakes are big business. The cupcake bakery Crumbs, which is also weighing a Boston location, is expected to go public after a $66 million merger with 57th Street General Acquisition. The investment company plans to list Crumbs on the NASDAQ, making it the first publicly traded cupcake bakery. The food industry research and consulting firm Technomic estimates that cupcake-only bakeries pulled in $100 million in total sales last year in the United States.

“It’s growing very fast,’’ says Darren Tristano, executive vice president of Technomic. “But sustaining this trend will be difficult. Especially as people continue to watch what they eat more closely. The challenge for these places will be figuring out how to get people to continue to snack on these very high calorie items.’’

Courtney Forrester, the owner of cupcake shop Sweet, which has three Boston-area locations, likens the proliferation of cupcake shops to ice cream parlors or coffee houses. She sees it as another specialty category that is here to stay.

“Think back to when there were two kinds of coffee that were sold — regular and decaf,’’ she says. “And now you have to look really hard for someone who doesn’t have a specific coffee blend in mind. There’s now a coffee shop on every corner. Twenty years ago, I don’t think any of us imagined that there could be a on every block.’’

But even customers of these cupcake boutiques admit that they see cupcakes as an occasional indulgence rather than an everyday staple like coffee.

“If I had as many cupcakes as coffee, I’d be in big trouble,’’ said British tourist Kate Lowe, who was enjoying a Boston Cream Pie cupcake at Sweet last week.

Whatever direction the trend takes, there are still many fans of the dessert who say that we’ll always have cupcakes.

“Listen,’’ said impassioned cupcake fan Ken Ross as he ate a Red Velvet at Sweet. “I’m 58 years old, and I’ve always eaten cupcakes. I don’t care if a bunch of New York dames made them popular, I’m always going to eat cupcakes. Whether they’re trendy or not, I don’t care.’’

Where to get cupcakes

Find these mini treats all over town at bakeries and cupcake-only shops.
Your comment is subject to the rules of our Posting Policy
This comment may appear on your public profile. Public Profile FAQ