A steaming engine they love 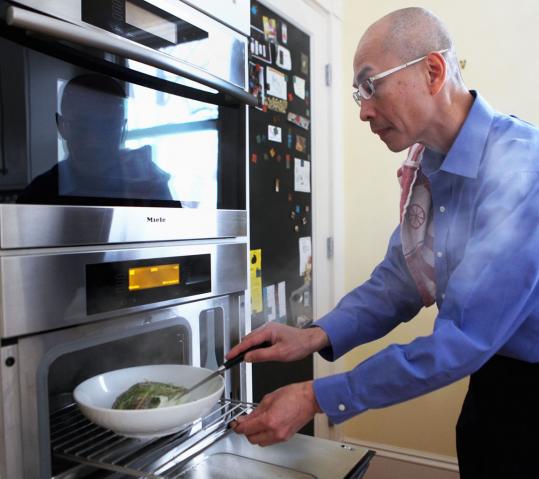 NEWTON — The Miele steam oven built into a kitchen wall in Carolyn and Paul Wong’s Victorian house is a tech dream. It has automatic settings for just about any food they want to cook in it, or they can program it for their favorites, and every time they use it, food comes out well.

On the outside, the oven looks like a built-in, sleek, stainless steel microwave. It has a 1.25-quart reservoir for water inside, and comes with perforated and solid metal pans to hold food and catch liquid. The Wongs use it routinely to steam vegetables and fish — something they used to do in a wok with a bamboo steamer. The oven makes the job easier and, Carolyn Wong notes, with the programmed settings, the food always comes out to the desired doneness. “Set it and forget it,’’ she says.

The couple first saw the Miele steamer, which costs about $2,600, at the home of friends about five years ago, when they were renovating their kitchen. They thought it was “the coolest thing,’’ Wong recalls, but struggled to rationalize what initially felt like a splurge. But since installing the equipment, her husband says, they use it “at least five times a week.’’

Both are enthusiastic cooks. Paul Wong grew up in Boston around food. His father owned Tiki Island restaurant in Medford and Tiki Port in Hyannis. At 14, he started working in his cousin’s restaurant in Pembroke. A financial planner today, he still loves to be in the kitchen. “I really learned everything I know how to do from Paul,’’ says Carolyn Wong, who grew up in Hawaii.

The Wongs have two sons, Douglas, 22 and Derek, 16, who enjoy their dad’s steamed black bean spare ribs, shiitake mushroom chicken breast with ginger and dried lotus flower shoots, and steamed egg custard with a drizzle of oyster sauce. The Wongs always steam rice in the oven, maintaining that it comes out even better than from a rice cooker. Carolyn Wong also says she prefers using the steam oven to a microwave for reheating leftovers because “it keeps in moisture.’’

Paul Wong’s mother, who makes dumplings from scratch, even grinding rice in a blender for the dough, no longer steams them at home. She brings wrapped and filled dumplings to her son’s house, where she steams them for the family.