Despite the chill, more farmers’ markets are operating in winter, offering a cornucopia of food produced nearby 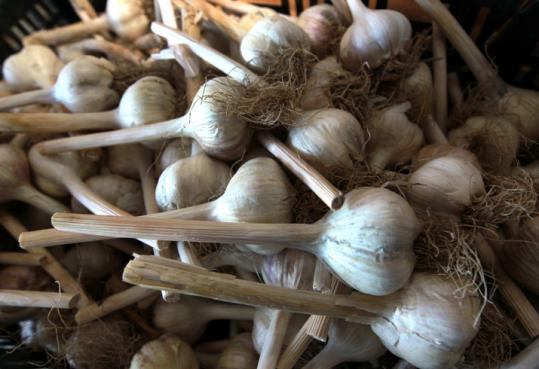 Indoor farmers’ markets are popping up like dandelions, exciting shoppers and vendors from Plymouth to Somerville with a cornucopia of fresh, local food.

Unlike the summertime markets, the baskets aren’t overflowing with sweet corn or plump red tomatoes still warm from the vine. Instead, there’s an abundance of root crops, preserves, pork, beef, rabbit, and winter greens.

“People are just bitten by the local bug,’’ said Barbara Anglin, who runs Plymouth’s summer markets and a winter market in its second season at Plimoth Plantation.

Winter markets are a growing phenomenon in Massachusetts as the trend toward buying fresh and local intensifies. Most are held once a month from November to March while summer markets are mostly weekly.

“It’s a way to extend the season and people like variety, whether it’s grains and wheat, or different varieties of squash,’’ said Scott Soares, state agricultural resources commissioner.

Nationwide, there are more than 890 winter farmers’ markets, up 17 percent from 2009, according to the US Department of Agriculture.

In Massachusetts, outdoor markets have doubled to 232 from 114 over the last five years, while the number of indoor markets has more than doubled in just the past year, to 17.

According to Soares, increased interest in fresh food, despite a down economy, has encouraged regional younger farmers, even though Massachusetts, Connecticut, and Rhode Island have the most expensive land costs in the nation.

“People are returning to the roots of their ancestors, and that is promoting a renaissance in fishing, forestry, and agriculture,’’ he said.

Ed Lawton’s roots go back to 1732 in Foxborough, and he’s part of the ninth generation to work Lawton’s Family Farm, which produces raw milk and grass-fed beef and veal. The Foxboro Cheese Co., another family enterprise, makes asiago and fromage blanc.

Lawton, and farmers like him, rely on the direct sales of farmers’ markets, just like the old days, to make ends meet.

“Things are coming around full circle,’’ said Lawton, who runs the farm with his wife and daughter and was clearly enjoying himself as customers happily tried samples and made purchases last month at the Plymouth Winter Market.

That market draws dozens of vendors and hundreds of shoppers to Plimoth Plantation Visitors Center, where there is also music, storytelling, crafts, and gifts, said Anglin. She launched the winter market last year after the tomato blight the year before cost some local growers up to 30 percent of their income.

Some farmers place “hoop houses’’ over the fall crop to extend the season for things like kale or Swiss chard, she said. Others, like Donna Blischke, from Carver’s Web of Life Organic Farm, preserve unsold berries and sell the jams and jellies in winter to prevent waste.

“Food preservation is a dying art,’’ said Blischke, who learned to can food from her mother.

On the other hand, East Bridgewater resident Drew Poce is a relative newbie, having run a company for decades before choosing to go fishing permanently with his Nantucket Wild Gourmet and Smokehouse, based in Chatham.

“All my life I wanted to be a fisherman,’’ Poce said as he offered small slabs of his wares on toothpicks. “Here,’’ he said enthusiastically of some smoked bluefish. “It tastes like ham.’’

Like others, Poce attends at least 15 farmers’ markets a week in summer and is quickly filling his winter dance card.

“This really helps me get my name out,’’ he said. But that can’t compare with a 2008 Oprah Winfrey declaration that his is the country’s best smoked salmon. Waving a package of the Oprah-approved pinkish fish, Poce said, “This is what got me on the map.’’

Then there’s Tony Melli of Westport, a 34-year former high-school guidance counselor who now imports olive oil from Italy, and Danielle Verzone of Scituate, who opened Sirenetta Seaside Chocolatier last year after being laid off from a “soul-sucking’’ corporate job.

Amara Sage of Plymouth’s Blue Blinds Bakery sells bread, cookies, and other baked goods to complement sales at the store run by the religious group the Twelve Tribes, 85 of whom live together in Plymouth. “We just want to have a presence,’’ Sage said. “This gets our name out, and it’s a communal effort.’’

Shoppers at winter markets have plenty of choices, said Meghan Doyle of Duxbury, who bought a loaf of fresh bread at the Plymouth market.

Why shop there? “I’d rather meet the vendors here than go to a big store,’’ she replied.

In Walpole, Economic Development Director Stephanie Mercandetti runs a winter market that’s just getting its sea legs. It attracts a dozen or more vendors and sellers, ranging from a Rhode Island beekeeper to the Big Sky Bakery in Newton to farmers who harvest sweet potatoes, garlic, lettuce, and carrots.

“It’s certainly a cultural change, but we’re seeing it grow,’’ she said. “We’re just trying to get the word out that these folks bring a great variety of fresh items.’’ And, she added, “we’re glad we’re indoors.’’

Michele Morgan Bolton can be reached at mbolton1@verizon.net.