Belgians that hit close to home

New-England brewed pale ales, tripels, and quads that give the natives a run for their money 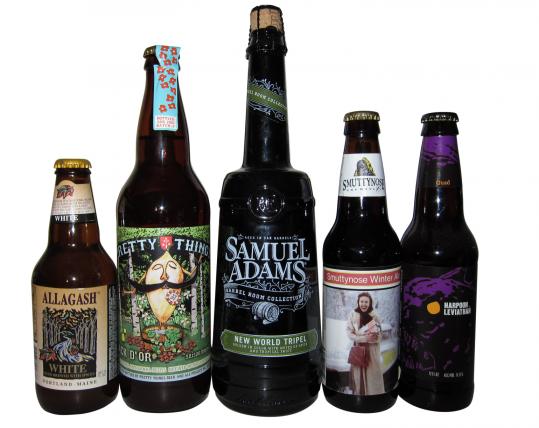 Often when I bring up the subject of Belgian beer or offer someone a Chimay or Piraat, I get this response: “I don’t like Belgian beer.’’

How frustrating. To me, that’s sort of like saying “I don’t like pie.’’ Belgian isn’t a style; it’s an entire order of styles, from light-bodied Belgian pale ales and tripels to shockingly intense quads and gueuzes.

Many of the world’s best beers come from Belgium. But they come with a price. A four-pack of a top-notch Belgian ale such as Duvel or Gulden Draak can cost $16 to $20. A single 750-milliliter bottle can cost $12 or more. But these days you don’t have to spend a lot of money — or look very far from home — to enjoy a good Belgian-style ale. As craft brewing has exploded, American brewers are now churning out Belgian beers. Here are five excellent Belgians made right here in New England.

Allagash White sets the American standard for witbier (which literally means “white beer’’). In the United States, witbier is the Belgian style we’re most familiar with, thanks to Coors’ Blue Moon Belgian White (that’s right, Blue Moon is not an actual brewery; it’s just a Coors label). President Obama famously served one to Cambridge Police Sergeant James Crowley during their “beer summit’’ with Skip Gates. If you like Blue Moon, you’ll absolutely love Allgash White — and you won’t go back to Blue Moon. With an aroma of bananas and cloves, Allagash White is a murky, cloudy blonde. Strong notes of orange, lemon, and coriander come through, along with herbal suggestions. It finishes smooth and almost creamy. Witbiers are perfect for hot summer days, but give me Allagash’s any day.

Jack D’Or is the flagship beer of the Pretty Things Beer and Ale Project, a husband-and-wife operation that is based in Somerville but doesn’t have its own equipment. Instead, Dann and Martha Paquette rent from other brewers. The system is working, because there’s not a dud in the Pretty Things lineup. The saison (literally “season’’) — also known as farmhouse ale — was traditionally a low-alcohol beer drunk in the summer by farmhands working in the fields, since water was unsafe to drink. While saisons were typically under 3 percent ABV, Jack D’Or is more than twice as strong. Cloudy yellow and well carbonated, Jack D’Or has a nice fluffy head that emits bananas, cloves, and pepper. This is an unusually hoppy saison, almost approaching Belgian IPA territory (Houblon Chouffe, not Stone Cali-Belgique). Jack is one unique, complex beer.

New World Tripel is part of the “Barrel Room Collection’’ unveiled in 2009 by the A decidedly upscale offering in the Sam Adams stable, New World Tripel comes in an attractive cork-finished bottle, underscoring the assertion that something special is inside. Brewed with malted wheat, three kinds of pale malt, and two varieties of hops, and aged in oak casks for six months, this tripel bursts with esters of tropical fruit. Pouring golden with a dense head, the beer is at once fruity, spicey, and smooth — it hides its 10 percent ABV well. The tripel is the one style where Americans have matched the Belgians, and you can’t do better than Sam Adams’s version.

Despite what its name may suggest, Smuttynose Winter Ale is not a winter warmer. It’s a Belgian dubbel. This is no shock; Smuttynose says the beer is brewed with “a special Trappist ale yeast.’’ The beer pours a deep mahogany with a solid, soapy head — big bubbles and all. Plums and figs come through in the aroma, and cherries and spices reveal themselves in the taste. Ginger and cardamom notes splash on the back of the tongue as this smooth beer goes down. At 5.1 percent this is by no means a strong dubbel — which is a good thing, because you’ll want another immediately after finishing the first one. It’s a shame this beer is available only in the winter months.

Part of Harpoon Brewery’s Leviathan “big beer’’ series, this quad holds its own against Belgian’s premier beers. And it’s boozier than its Belgian ilk — Rochefort 10, St. Bernardus Abt 12, Westvleteren 12 — whose alcohol content hovers around 10 percent. Harpoon’s appears to be a bit lighter in color than those — a deep mahogany as opposed to a dark brown — with huge yeast flakes floating in the liquid. There’s a lot of dried fruit in the scent, and a slight alcohol burn as it goes down the throat. It’s a deep and rich beer, one of the best in Harpoon’s stable. The brewery releases this beer in February, so decide for yourself whether to wait a few weeks for the next batch or pick up a four-pack from 2010. It ages well, as all quads do, so there’s no reason to avoid last year’s batch. Mine is still superb.

99 Bottles is a monthly column about good beer. Steve Greenlee can be reached at greenlee@globe.com.