THIS STORY HAS BEEN FORMATTED FOR EASY PRINTING
Cooking

Warm up with onion soup for supper

Making classic onion soup is not complicated, but it requires commitment. Not only do you have to peel and slice a multitude of onions (OK, the food processor will slice them for you, but there’s no way around the peeling), then, to maximize their flavor, you have to cook them slowly and carefully, for two hours or more, so they’ll caramelize deeply.

And I do mean deeply, to about the color of an old penny. This comes from evaporating the moisture and browning the onions’ sugars on the bottom of the pot, deglazing with liquid to dissolve the brown bits (the fond in French technique talk), and mixing them into the onions -- then doing it again and again until the onions become sufficiently dark.

The reward is well worth the time and effort. The house will smell great, you’ll warm up by the stove on a cold winter day, and, of course, you end up with a pot of rich, sweet-savory soup. This recipe makes a soup that’s thicker, with more body -- and a lot more onions -- than some standard versions, which tend toward the brothy.

The moisture content of yellow onions can vary, so watch the pot carefully as they caramelize. If you’re out of white wine but happen to have some dry sherry, go ahead and use it instead.

In a large Dutch oven over medium-high heat, melt 3 tablespoons butter. Add the onions and 1 teaspoon salt and cook, stirring occasionally, until the onions begin to release moisture, about 10 minutes. Adjust the heat to medium, add the bay leaves, and continue cooking, stirring and scraping the bottom of the pot occasionally, until onions are light gold and sticky, about 1½ hours.

Fill a measuring cup with ¾ cup water and adjust heat under onions to medium-low. Add ¼ cup water, and scrape the bottom of the pot until the brown bits dissolve. Continue to cook until pot bottom is again coated with a brown film, about 12 minutes, stirring and scraping the bottom of the pot just once or twice during that time and adjusting heat as necessary. Add another ¼ cup water, scrape the bottom of the pot, and cook until another brown film forms on the pot bottom, about 12 minutes longer, again stirring and scraping just once or twice. Repeat this cooking and deglazing process one more time, until all of the water has been used and the onions are dark brown. Add the thyme and flour, and continue to cook, stirring constantly, for about 3 minutes.

Add the wine, adjust the heat to medium-high, and continue to cook, stirring and scraping the bottom of the pot constantly, for about 3 minutes longer. Add the chicken and beef broths and 1 teaspoon salt, and bring to a simmer, stirring occasionally. Adjust heat to medium-low, and simmer, stirring occasionally, to blend flavors, about 30 minutes. Remove the bay leaves and stir in the remaining butter. Taste the soup and adjust seasoning with additional salt, if necessary, and pepper to taste.

Meanwhile, set the oven rack in the middle position and heat the oven to 425 degrees. Trim ends off the baguette and bias-cut it into at least 12¾-inch-thick slices. Arrange the slices on a baking sheet and toast in the oven until lightly golden, about 10 minutes, turning over the slices about halfway through baking time. Heat the broiler and set the oven rack about 6 inches below the element. Lightly swipe each toast with the raw garlic clove, if using, then sprinkle each with about 2 tablespoons cheese and broil until the cheese is melted and browned in spots, about 4 minutes. Meanwhile, ladle the soup into 6 warmed bowls. Garnish each serving with toasts, sprinkle with some of the chives, if using, and serve at once.

Onion soup with cider and Camembert

Substitute minced fresh sage for the thyme, Calvados, applejack, or cognac for the wine, and apple cider for the beef broth.

Stir 1 teaspoon cider vinegar into the soup along with the final tablespoon of butter.

Substitute 8 ounces Camembert, thinly sliced, for the gruyere. Broil the toasts until the cheese is bubbly, about 2½ minutes.

Onion soup with ale and stilton

Substitute ale for the beef broth.

Substitute 6 ounces crumbled Stilton, its rind removed, for the final tablespoon of butter.

In a small bowl, mash an additional 3 ounces Stilton with 2 tablespoons butter. In place of the gruyere, spread about 2 teaspoons of the Stilton butter onto each toast and broil until just starting to brown, about 1½ minutes.

Send comments or suggestions to Adam Ried at cooking@globe.com. 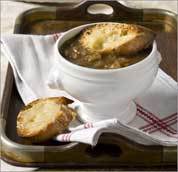 (Photograph by Ekaterina Smirnova)
Your comment is subject to the rules of our Posting Policy
This comment may appear on your public profile. Public Profile FAQ