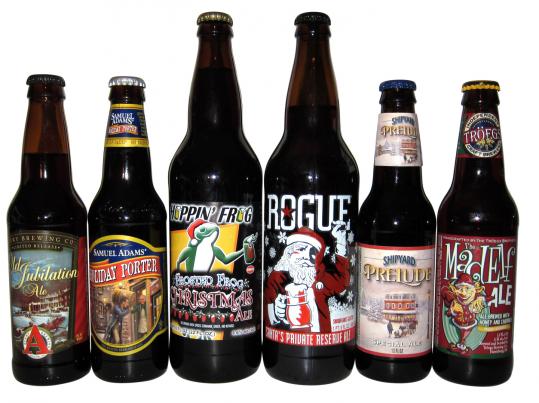 Going to the liquor store in December is like walking in a winter warmer land. Brewers use the holiday season as a reason to trot out specialty ales and slap Christmas- and winter-themed labels on the bottles. Many of these beers fall into the “winter warmer’’ category — heavier on malt than hops, perhaps brewed with cinnamon, nutmeg, and other spices. But many fall into other categories that could be enjoyed any time of year. There are too many holiday beers to try in the short time they’re available. To get you started, here are 12 notable American-made craft beers of Christmas.

The beer: Perhaps the most controversial holiday beer around, Harpoon Winter Warmer is both loved and hated. The haters say it’s cloyingly sweet and overly spiced. Which is exactly why some people love it. My verdict? It’s Christmas in a bottle, a guilty pleasure, but one six-pack a year is enough.

The beer: The nose is all cinnamon and nutmeg, but those spices are pretty much absent from the taste. Instead, roasted coffee and burnt-wood notes emerge. There’s no aftertaste at all.

The beer: Classified as a winter warmer, this is really more of an English old ale. Pouring the color of a , its aroma is smoky, like a smoldering fireplace, and full of molasses. But it’s only medium-bodied and surprisingly drinkable.

The beer: Brewed with cinnamon, ginger, and orange peel, Old Fezziwig is available only in Sam Adams’ winter mix. But it’s the best reason to buy the mix pack. (Another good reason: The dreadful cranberry lambic is no longer included.) Old Fezziwig pours mahogany with a nice frothy head. Subtly spiced with a strong malt backbone, it finishes with a faint citrus bite.

The beer: The second-best reason to get the Sam Adams winter pack. Dark brown with caramel and molasses in both the aroma and taste, it’s slightly bitter and very satisfying.

The beer: An amber ale, it’s hoppier than you might expect. The aroma is full of grapefruit, but on the tongue it’s incredibly well-balanced. This is an all-around great beer.

The beer: Celebration pours a dark amber with a nice fat head. It’s a robust IPA — hoppy and bitter — with a nose of pine and grapefruit. Celebration is perhaps the most discussed IPA around. Every year, inevitably, drinkers say it’s not as hoppy as the previous year’s. Sierra Nevada, however, says the recipe hasn’t changed in many years. Of course, it’s impossible to compare this year’s Celebration to last year’s, since a bottle stored for a year will lose much of its hoppiness.

The beer: Prelude pours the color of Grade B maple syrup — which is appropriate, since maple is present in both the taste and the aroma. Nutmeg and caramel notes arise too in what is essentially a spiced brown ale. Bold and malty, this ranks among Shipyard’s finest offerings.

The beer: Pouring a deep mahogany, Old Jubilation is a boozier, spicier Prelude. Interestingly, though, no spices are used in Old Jubilation’s brewing — but five different malts are. With hazelnuts and butterscotch on both the nose and taste, this is a perfect representation of the style.

The beer: Holy cow, this is one aromatic beer. Cinnamon, ginger, and nutmeg thrust forth from the glass. Exceedingly sweet and full-bodied, it tastes like a liquid gingerbread. This beer is a dessert.

The beer: Pitch black with a nose full of burnt coffee and black licorice, this is a serious stout. Dark and intense, Santa’s Little Helper goes overboard with roasted malts and winds up being quite bitter.

Tröegs The Mad Elf Ale Style: Belgian strong dark ale ABV: 11 percent Price: $16 per six-pack The beer: The aroma is all Belgian yeast and dark cherries. But the taste, happily, does not overwhelm with cherry. Pouring a red-brown with almost no head, this is a complex, sweet, boozy Belgian brew.

OK, we’re going to give you one more and make it an uneven 13. The first dozen came from American brewers. Some world-class Christmas-themed beers, however, come from Belgium, such as Delirium Noel, Struise Tsjeeses, and N’Ice Chouffe. My current favorite:

The beer: A downright perfect representation of its style, it pours a dark red-brown with a gigantic head. It smells like figs and dried fruit, and that wonderful Belgian yeast smacks your tongue right away. Pricey but worth it once a year.