Hosting a party? Relax and have fun.

Entertaining without the stress 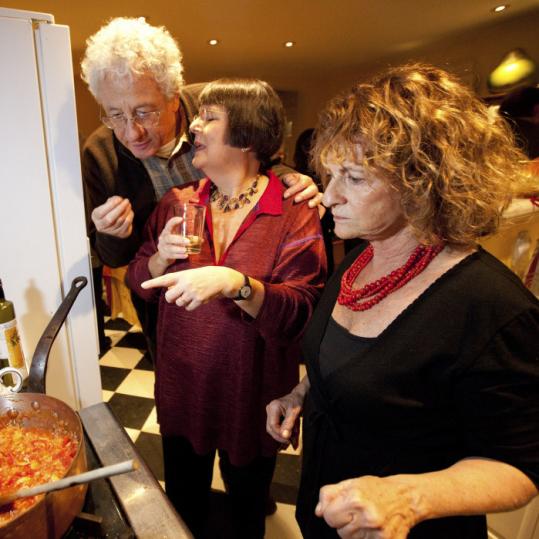 For every person who enjoys planning, cooking, and setting a festive table, there seems to be a greater number who find it a chore. Having people over is indeed a commitment of time and effort. It should reflect your own personal style.

That means entertaining just the way you like. According to several caterers, accomplished cooks, and authors, as the host you get to decide how things are done. For their opinions on what makes a good dinner party, we talked to two local caterers, Terence Janericco of Boston and Ariadne Clifton of Cambridge; two home cooks, Bonnie Shershow of Cambridge and Audrey Orenstein of Needham; and Barbara Kafka of New York, author of more than a dozen cookbooks, including “Party Food.’’

The five shared their personal do’s and don’ts. If you are always a guest, and never a host, you’re still not off the hook. Guests have responsibilities, too.

Thinking about the menu Kafka’s advice is to avoid anything too fancy. “Your guests will not be less pleased if it’s a simpler meal,’’ she says. Both Kafka and Clifton say home cooks should use recipes that aren’t out of reach. “The worst thing is when the host is struggling in the kitchen for a long period of time,’’ says Clifton.

Get most of the work done before the party so you can socialize, suggests Janericco. Braised dishes are perfect. “All you have to do is reheat and they’re better for it.’’

Shershow has a different style. “The preparation can be part of the fun,’’ she says. She thinks it creates a more casual environment when guests see and smell foods cooking.

“If you don’t like to cook, then don’t,’’ says Clifton, who suggests buying a roast chicken, a baked ham, or arranging an antipasti of meats, cheeses, olives, and vegetables. “Your job is to make the food look appetizing and festive,’’ she says.

That said, as a host you must cater to dietary restrictions, says Janericco, but not necessarily to everyone’s dislikes. If you want to serve roast beef and there’s a guest who doesn’t eat red meat, he suggests making a few pieces of chicken or fish.

If something doesn’t turn out as planned, “apologize and serve it anyway,’’ says Kafka, “unless it’s inedible.’’ Janericco takes another approach: “Don’t say anything if it doesn’t turn out perfectly. Worst is a host who points out all the flaws in the dish.’’ Follow the lead of a cook he knows who turned a deflated chocolate souffle into a flourless chocolate cake, slathered it with whipped cream, and named it something romantic.

On the other hand, Orenstein appreciates feedback from her guests. “I look at [entertaining] as a creative process,’’ she says.

Creating the guest list Shershow enjoys hosting eclectic groups, composed of people who work in different fields, singles, and couples. Kafka finds the best gatherings are when guests have similar interests. A few “amusing and witty’’ types, she says, are always useful. Janericco suggests separating spouses at the table for more interesting conversation.

Setting the table “Forget expensive flowers and put out bowls of grapes, other fruits, or nuts in their shells,’’ says Clifton, who thinks people have more interesting serving pieces than they think they have.

How you serve depends on the number of guests. If your table is large enough, Janericco and Clifton recommend passing platters family style for guests to help themselves. Or if you want foods plated a certain way, say, sauteed scallops on top of risotto, do this at the table.

For gatherings of more than 10, Orenstein sets up a buffet in the kitchen. Shershow, who enjoys parties of 15 to 20, always serves buffet-style. “I try to make dishes where you don’t need a knife,’’ she says.

‘What can I bring?’ Many accomplished cooks prefer making the entire meal. “The fun for me having a dinner party is preparing the food and constructing a menu that fits together really well,’’ says Shershow.

Orenstein thinks some people “don’t feel comfortable when I tell them they don’t need to bring anything.’’ So she decides what’s most important for her to cook and suggests something for a guest. Kafka doesn’t want anyone to come with food, but understands that “most people think cooking is onerous, so they’re trying to relieve you.’’

The guests’ role “Respond to an invitation, arrive on time, be nice to other guests, and be good conversationalists,’’ says Janericco.

Eat the food, says Clifton. Even if the meal is mediocre, “the host has made an effort.’’

Don’t get up and start clearing the table, says Shershow. “It disrupts the conversation.’’

In the end, when you entertain, you want to have a good time with people you care about. Hosts who are relaxed will make their guests feel the same. When it all comes together well, it’s a joy. Janericco says that after the best dinner parties, he starts to think about the next one.